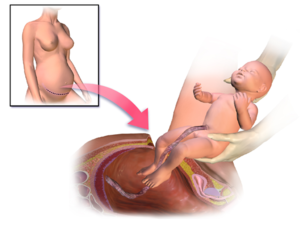 Its extension is from navel to pubic hairline.

Reasons for the Procedure

Some cesarean deliveries are planned and scheduled, while others are performed as a result of complication that occurs during the labour. There are several conditions in which cesarean delivery is more likely to occur. These include:

Informed written permission from the patient for the procedure,anesthesia and blood transfusion is obtained.

Position of the patient: The patient should be placed in the dorsal position. In susceptible cases, to minimize any harmful effects of venacaval compression, a 15 degree tilt to her left using a wedge till delivery of the baby should be done.

Anesthesia- It can be spinal, epidural or general. However, the choice of the patient and the urgency of delivery is also considered.

Antiseptic painting-The abdomen should be painted with 7.5% povidone-iodine solution or savlon lotion and should be properly draped with sterile towels.

Incision on the abdomen.

Packing:The Doyen’s retractor is introduced in this stage.

The membranes are ruptured if it is still intact. The blood mixed amniotic fluid is sucked out by continuous suction. The Doyen’s retractor is removed. The head is delivered by hooking the head with the fingers which are carefully insinuated between the lower uterine flap and the head until the palm is placed below the head. The head is delivered by elevation and flexion using the palm to act as fulcrum. As the head is drawn to incision line, the assistant is to apply pressure on the fundus. If the head is jammed, an assistant may push up the head by sterile gloved fingers introduced into the vagina. The head can also be delivered using either Wringley’s or Barton’s forceps. Delivery of the trunk: As soon as the head is delivered, the mucus from the mouth, pharynx and nostrils is sucked out using rubber catheter attached to an electric suction machine. After the delivery of the shoulders, intravenous oxytocin 20 units or methergine 0.2 mg has to be administered. The rest of the body should be delivered slowly and the baby should be placed in a tray placed in between the mother’s thighs with the head tilted down for gravitational drainage. The cord should be cut in between two clamps and the baby should be handed over to the paediatrician. The Doyen’s retractor is reintroduced. The optimum interval between uterine incision and delivery should be less than 90 seconds.

Removal of the placenta and membranes:

By this time, the placenta is separated spontaneously. The placenta has to be extracted by traction on the cord with simultaneous pushing of the uterus towards the umbilicus per abdomen using the left hand(controlled cord traction). Routine manual removal should not be done. Dilation of internal os is not required. Exploration of the uterine cavity is desirable.

Suture of the uterine wound.

Non closure of visceral and parietal peritoneum is preferred .

The mops placed inside are removed and the number is checked.Peritoneal toileting should be done and blood clots are to be removed carefully and precisely.The tubes and ovaries are examined.Doyen’s retractor is removed.After being satisfied the uterus is well contracted, the abdomen is closed in layers.The vagina is cleansed of blood clots and a sterile vulval pad is placed.[9]

Postpartum intervention for the woman who had a cesarean delivery is similar to that of the woman who has had a vaginal delivery. However, a cesarean section is major abdominal surgery with all the complications of such surgeries and therefore the woman will also require general post-surgical rehabilitation.

To improve pulmonary function and decrease the risk of pneumonia

To decrease incisional pain with coughing, movement or breastfeeding.

To decrease post-surgical discomfort from flatulence, itching or catheter.

To prevent injury and reduce low back pain.