Myofascial pain can be defined as "pain associated with inflammation or irritation of muscle or of the fascia surrounding the muscle".[1] Myofascial pain is a common issue with estimates that 85% of the general population will experience it at some point in their lifetime [2]. Myofascial pain syndrome (MPS) is a common clinical problem, arising from the muscle and produces sensory, motor and autonomic symptoms which are caused by myofascial trigger points which are focal areas of tenderness caused by hypercontracted muscle tissue [3]. They are usually a taut band of skeletal muscle which is painful on compression or deep palpation and can give rise to characteristic Referred Pain, motor dysfunction and autonomic phenomena.[4] MPS has been described as a soft tissue pain syndrome where the pain is present primarily in a single area or quadrant of the body, as compared to other soft tissue pain syndromes, such as chronic fatigue syndrome, hypermobility syndrome, or fibromyalgia, where the pain is generalized. It can be acute or chronic; it can also be post-traumatic, lasting beyond the “normal” time of healing, usually over 3 or 6 months.[5] [6] 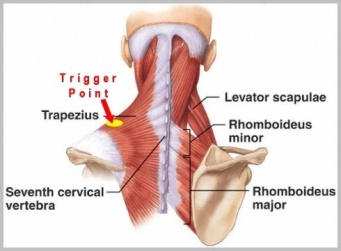 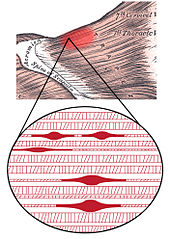 Another interesting clinical characteristic is the spontaneous electrical activity (SEA) recorded in myofascial trigger point sites with needle electromyography[8]. The  site of this electrical activity is called "active locus". SEA consists of continuous, noise-like action potentials that can range from 5 to 50 µV, with intermittent large amplitude spikes up to 600 µV. This abnormal endplate potential is caused by an excessive release of acetylcholine at the motor endplate. The magnitude of SEA is related to the pain intensity in patients with myofascial trigger points. In clinical practice, there is no benefit in using needle electromyography and its utility is limited to research studies.


Low level muscle contractions:
Low-level muscle contractions involve a selective overload of the earliest recruited and last derecruited motor units ("Henneman's size principle"[11]). Smaller motor units are recruited before and derecruited after larger ones; as a result, the smaller type I fibers are continuously activated during prolonged motor tasks, which in turn it can result in metabolically overloaded motor units with a subsequent activation of autogenic destructive processes and muscle pain, this is also known as the Cinderella hypothesis[12][13].


Direct trauma:
Direct trauma may create a vicious cycle of events wherein damage to the sarcoplasmic reticulum or the muscle cell membrane may lead to an increase of the calcium concentration, a subsequent activation of actin and myosin, a relative shortage of adenosine triphosphate (ATP), and an impaired calcium pump, which in turn will increase the intracellular calcium concentration even more, completing the cycle. As a result taut bands inside muscle may be developed and lead to the formation of active or latent myofascial trigger points.


Maximal or submaximal concentric contractions:
During maximal or submaximal concentric contractions high amounts of energy (ATP) are required. When the demands of exercise begin to exceed the ability of the muscle cells to produce ATP, anaerobe glycolysis will begin consuming more and more of the available intracellular ATP. The muscle will eventually run out of ATP and sustained muscle contractions may occur, starting the development of trigger points

The initial change in muscle that is associated with myofascial pain seems to be the development of the taut band, which is in term a motor abnormality. Several mechanisms have been hypothesied to explain this motor abnormality, the most accepted one is the "Integrated Hypothesis" first developed by Simmons[4] and later expanded by Gerwin[14].
Simmons' integrated hypothesis is a six-link chain that starts with the abnormal release of acetylcholine. This triggers an increase in muscle fiber tension (formation of taut band). The taut band is thought to constrict blood flow that leads to local hypoxia. The reduced oxygen disrupts mitochondrial energy metabolism reducing ATP and leads to tissue distress and the release of sensitizing substances. These sensitizing substances lead to pain by activation of nociceptors and also lead to autonomic modulation that then potentiates the first step: abnormal acetylcholine release. 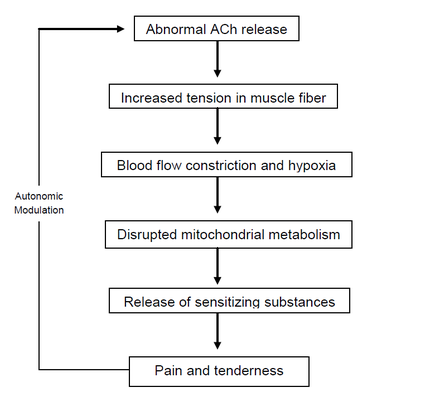 Gerwin expanded this hypothesis by adding more specific details[14]. He stated that sympathetic nervous system activity augments acetylcholine release and that local hypoperfusion caused by the muscle contraction (taut band) resulted in muscle ischemia or hypoxia leading to an acidification of the pH.
The prolonged ischemia also leads to muscle injury resulting in the release of potassium, bradykinins, cytokines, ATP, and substance P which might stimulate nociceptors in the muscle. The end result is the tenderness and pain observed in myofascial trigger points.
Depolarization of nociceptive neurons causes the release of calcitonin gene-related peptide (CGRP).
CGRP inhibits acetylcholine esterase, increases the sensitivity of acetylcholine receptors and release of acetylcholine resulting in SEA.
In recent studies Shah et al.[15] confirmed the presence of these substances using microdyalisis techniques at trigger point sites. Elevations of substance P, protons (H+), CGRP, bradykinin, serotonin, norepinephrine, TNF, interleukines, and cytokines were found in active trigger points compared to normal muscle or even latent trigger points. The pH of the active trigger point region was decreased as low as pH 4 (normal pH value is 7,4) causing muscle pain and tenderness as well as a decrease in acetylcholine esterase activity resulting in sustained muscle contractions.

There are mechanical perpetuating factors such as:

There are as well systemic or metabolic perpetuating factors such as:

And other possible perpetuating factors:

In some cases, managing and correcting an identified perpetuating factor may lead to a complete resolution of pain and may be the sole therapeutic approach needed to relief the patient’s symptoms.[16][4]

Palpation is the gold standard in identifying the presence of taut bands in muscle. This involves the training and accurate skills of practitioners to identify these taut bands.
Palpation of taut bands needs a precise knowledge of muscle anatomy, direction of specific muscle fibres and muscle function.
The palpation on muscle must meet several essential criteria and confirmatory observations to identify the presence of trigger points[4].

Recent research has shown interesting results using magnetic resonance elastography.[20] The technique involves the introduction of cyclic waves into the muscle, and then using phase contrast imaging to identify tissue distortions. The speed of the waves is determined from the images. Shear waves travel more rapidly in stiffer tissues. The taut band can then be distinguished from the surrounding normal muscle.

Another recent technique used to confirm the extension of myofascial trigger point sites is sonoelastography combined with Doppler imaging.[21]
It uses a clinical ultrasound imaging system with a 12-5 MHz linear array, associated to an external vibration source (hand held vibrating massager) working at cycles of approximately 92Hz. Doppler imaging is used to identify surrounding blood flows.
Ballyns et al. showed in their study that sonoelastography can be a useful tool to classify myofascial trigger points by area. Larger areas correspond to active trigger points and smaller ones to latent trigger points.
To note that this technique needs preliminary manual palpation of trigger points.

One source of confusion associated with myofascial pain is fibromyalgia. It is true that both entities are likely to cause severe muscle pain and tenderness but they do not share the same etiology or pathogenesis and their clinical presentation is not the same. Therefore two different conditions should be distinguished.
In 1990 the American College of Rheumatology published the diagnostic and classification criteria for fibromyalgia.[22] This classification has been updated recently in 2010.[23] The diagnosis of fibromyalgia is based on a history of widespread pain (for at least 3 months of duration), defined as bilateral, upper and lower body, as well as spine, and the presence of excessive tenderness on applying pressure to 11 of 18 specific muscle-tendon sites or tender points.

A differential diagnosis should be made with other conditions such as: muscle spasm, neuropathic or radicular pain, delayed onset muscle pain, articular dysfunction and infectious myositis.

There are two different approaches in the treatment of myofascial trigger points. There are non-invasive techniques such as Therapeutic Ultrasound, Low-level laser therapy, Transcutaneous Electrical Nerve Stimulation (TENS), drug therapy (e.g. myorelaxants) and several physical and manual therapy techniques such as:

In a recent study, Bron et al.[24] conducted a controlled trial in the treatment of myofascial trigger points in patients with shoulder pain. They decided to only use manual techniques associated with home exercises and ergonomic recommendations. After 12 weeks of treatment there was a statistically significant improvement in the intervention group compared with the control group.

On the other hand there are different invasive techniques that share a common goal: the inactivation of an active loci in a central trigger point with a needle.
Different modalities exist:

Evidence for the treatment and management of myofascial pain is common, but investigates a number of less traditional approaches in healthcare and often carries these out in small samples with individual treatment protocols and therefore are not easily able to be compared to other studies.

Lugo et al [26] found that in a three-arm trial of Lidocaine injection, Physiotherapy or combined therapies, The authors found that there were no differences in the VAS pain, PHQ 9 depression scores or SF6 quality of life scale. The authors concluded that the findings may suggest that p Physical therapy consisting of hot-packs, ultrasound, manual compression, deep stroking and muscle stretching and strengthening may have a role in upper limb function. This however, was based trends within the data and require more investigation.

A systematic review published in 2020 of the effects of extracorporeal shockwave therapy on myofascial pain found that there was some low-level evidence that it may be effective in the short-term relief of neck pain but that this evidence was not strong or supported by high-quality research studies. [28]