Referred pain is pain perceived at a location other than the site of the painful stimulus/ origin.[1] It is the result of a network of interconnecting sensory nerves, that supplies many different tissues. When there is an injury at one site in the network it is possible that when the signal is interpreted in the brain signals are experienced in the surrounding nervous tissue. [2]

Several neuroanatomic and physiologic theories state that nociceptive dorsal horn and brain stem neurons receive convergent inputs from various tissues. Therefore, higher centres cannot correctly identify the actual input source. Recent theories have suggested models in which plasticity of dorsal horn and brainstem neurons play a central role. During the past decade, a systematic attempt to chart referred musculoskeletal pain areas in humans has been made.[1]

A prime example of this phenomenon is the pain experienced in cardiac ischemia; the pain is felt in the neck,left shoulder and down the left arm. The referred pain occurs because of multiple primary sensory neurons converging on a single ascending tract. When the painful stimuli arise in visceral receptors the brain is unable to distinguish visceral signals from the more common signals that arise from somatic receptors. This results in pain being interpreted as coming from the somatic regions rather than the viscera.[4] Imman and Saunders suggested that referred pain followed the distribution of sclerotomes (muscle, fascia, and bone) more frequently than it followed the classical dermatomes.[1] Sensory manifestations of clinical and experimental muscle pain are seen as diffuse aching pain in the muscle, pain referred to distant somatic structures, and modifications in superficial and deep tissue sensibility in the painful areas.[1]Peripheral input from the referred pain area is involved but not a necessary condition for referred pain. Hypothetically, convergence of nociceptive afferents on dorsal horn neurons may mediate referred pain.[1] 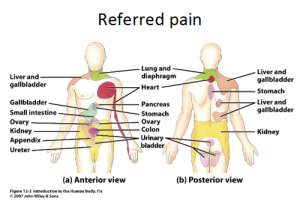 Several neuro physiological theories have been suggested[1]:
• Convergence-projection theory
This is the most acceptable explanation in which the pain is caused by convergence of afferent information of the visceral organs and those of somatic origin on the same segment. This causes hyperreactivity of the dorsal horn neurons which is interpreted as coming from the same dermatome.
• Convergence-facilitation theory
• Axon-reflex theory
• Hyperexcitabillity theory
• Thalamic convergence theory

The most common causes of referred pain are pain radiating from; a spinal segment, a sacroiliac joint, viscera, tumors, infections or from associated manifestations.[5][6]

It should also be noted that the pain is always related to the nerve of this particular area. For example when the ninth cranial nerve (glossopharyngeal nerve) is involved the pain is felt deep in the ear. This is in contrast to the more superior located pain when the trigeminal nerve is involved.[6]

Studies of clinical pain are limited by bias because of cognitive, emotional, and social aspects of the disease. Pain is a multidimensional and highly individualized perception that is very difficult to quantify and to validate in the clinical setting. In experimental pain, the researchers have the possibility to control the intensity of the stimulus ,its duration and also its modality.[1] With experimental pain we can also asses the psychological evoked response or qualitatively (using, for example, the McGill Pain Questionnaire) or quantitatively (using, for example, visual analogue scores).[1]

Endogenous methods are not suitable to induce referred pain, because they are characterized by a high response rate en are very suitable for studying general pain states. But they have also the disadvantage because they involve several or all muscle groups. Therefore it’s better to use exogenous models.[1]

The exogenous model that is the most used is the intramuscular infusion of hypertonic saline. After the infusion, referred pain will be felt in structures at a distance from the infusion site.[1] There it will appear with a delay of approximately 20 seconds in comparison with local pain  [7]. The patient will experience this pain as being diffuse and unpleasant.[8]

Advantages and disadvantages of intramuscular infusion of hypertonic saline.

Also other alogenic substances such as bradykinin, serotonin, capsaicin and substance P can be used to cause referred pain.[9][10][1][2][3]

Results are showing us that there is a significant correlation between the size of local pain and referred pain areas and the local sensation/pain and referred sensation/pain intensity ratings.[1][4] Also Increased nociceptive input that will go to the dorsal horn or the brainstem neurons, which generates an expansion of receptive fields, may be responsible for the expansion of referred areas that are detected during an increased intramuscular stimulation. [4]

Several explanations regarding the divergent results obtained when an area of referred pain is anesthetized have been offered [4][1]:

Several studies have found that the area of the referred pain correlated with the intensity and duration of the muscle pain, which parallels the observations for cutaneous secondary hyperalgesia. [6][5]

The most effective treatment for chronic musculoskeletal pain is the using of NMDA-receptor antagonists (ketamin), this gives us better results than using conventional morphine management. [1][5].

There are two techniques to block all afferents from the referred pain area:

Other ways to treat the pain are:[9]