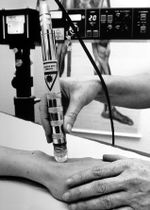 The term Laser is the acronym for Light Amplification by Stimulated Emission of Radiation. A laser light is monochromatic, collimated, and coherent. A laser  is a device that produces such a light. Low level laser therapy (LLLT) is used by some physiotherapists to treat various musculoskeletal condition. LLLT is a non-invasive light source treatment that generates a single wavelength of light. It emits no heat, sound, or vibration. It is also called photobiology or biostimulation. LLLT is believed to affect the function of connective tissue cells (fibroblasts), accelerate connective tissue repair and act as an anti-inflammatory agent. Lasers with different wavelengths, varying from 632 to 904 nm, are used in the treatment of musculoskeletal disorders.

Wavelengths between 660 nm and 905 nm have the ability to penetrate skin, and soft/hard tissues. This light have a good effect on pain, inflammation and tissue repair. [1] 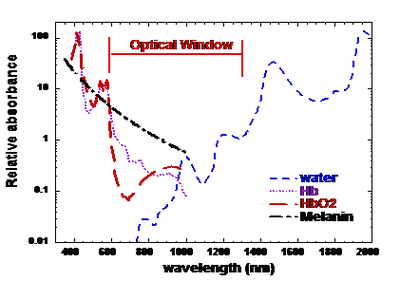 An output power of less than 0.5 Watts is classed as LLLT ( class III in the USA) whereas lasers with an output powers than 500 mW or 0.5 Watts are termed High Power Laser Therapy HPLT (Class IV lasers in the USA). HPLT creates heat on the surface of the skin due to their higher power density (irradiance). LLLT is often referred to as “Cold Lasers” since they do not create a heating sensation during treatment.[2]

The effects of the LLLT which are significant for physiotherapy, and makes this tool useful to enhance other treatments as therapeutic exercise, are:

In physiotherapy LLLT is use for pain relief, accelerated tissue regeneration and reduction of inflammation.

Conditions that are treated include

A 2017 systematic review and meta-analysis found that LLLT is an effective treatment modality to reduce pain in adult patients with musculoskeletal disorders. They also noted that adherence to the World Association of Laser Therapy (WALT) dosages improved effectiveness.[12]

A 2017 review titled "Effective treatment options for musculoskeletal pain in primary care: A systematic overview of current evidence" concluded that the evidence on effectiveness of laser therapy for shoulder pain or acute or chronic neck pain was inconclusive. With regards to knee pain low level laser therapy may confer added benefits to exercise and / or surgical treatment. [13]

Contraindication according to The North American Association for Laser Therapy are:

(conference of The North American Association for Laser Therapy in 2010)