Nociception is described by IASP as the neural process of encoding noxious stimuli. 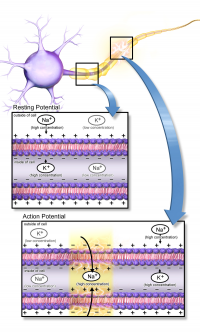 Central sensitisation is defined as an increased responsiveness of nociceptors in the central nervous system to either normal or sub-threshold afferent input[1] resulting in:

The image at R is of an action potential formation.

Watch the 2 minute video below on central sensatisation

Neural plasticity plays a role in cellular changes with a demonstrable increase in both membrane excitability and synaptic efficacy. 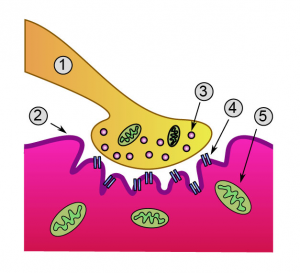 The effect of this process is:

The use of the term "central sensitisation" varies referring

A discussion about the various descriptions and definitions can be found on the Body in MInd website.

Latremoliere and Woolf describe the changes demonstrated in their group's 1983 study as "activity dependent central sensitization".

Activation of the NMDA receptor is an essential step in initiating and maintaining the sensitization (N-Methyl-D-Aspartate is a glutamate receptor. Glutamate is a widespread excitatory neurotransmitter in aht enwevious system).

While descriptively central sensitization and Peripheral sensitisation may appear to be comparable processes, they represent quite distinct and processes and clinical features[2].

1.Peripheral sensitisation is described by the IASP as

"Increased responsiveness and reduced threshold of nociceptive neurons in the periphery to
the stimulation of their receptive fields."[15]

A survey of expert clinicians in a Delphi-derived survey found the following characteristics to describe central sensitisation in the clinical setting [19]. 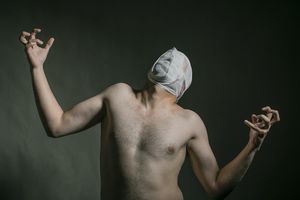 In 2009 Schäfer et al.[20] proposed a classification of low back-related leg pain using an examination protocol which incorporates first the subjective assessment, including the Leeds Assessment of Neuropathic Symptoms and Sign (LANSS) scale [21], and second the physical examination (neurological examination, assessment of active movements, neural tissue provocation tests). Based on this comprehensive assessment, a LANSS score ≥ 12 is indicative of central sensitization in their classification algorithm.


In 2010 Nijs et al.[22] provided guidelines to aid the recognition of central sensitization on musculoskeletal patients.

In 2012 Mayer et al.[23] proposed the Central Sensitization Inventory (CSI). The clinical goal of this screening instrument is to help better assess symptoms thought to be associated with CS in order to aid physicians and other clinicians in syndrome categorization, sensitivity, severity identification, and treatment planning, to help minimize, or possibly avoid, unnecessary diagnostics and treatment procedures. CSI has showed good psychometric strength, the clinical utility, and the initial construct validity.


In the video below, Prof Peter O'Sullivan discusses some of the myths about back pain which are widely held and negatively impact on the perception and treatment of back pain.

In cases of central sensitization it is important to:

This can be accomplished with pain physiology education, which is indicated when:

Check out the following video from Lorimer Moseley to see his approach to educating patients about managing pain.[27]

Usually Manual Therapy is used for its perpheral effects, however it also produces central analgesic effects[29][30][31] activating descending anti-nociceptive pathways for a short period of time (30 - 35 mins.)[32][33]. This limits its clinical use in the management of central sensitization.

Repetitive transcranial magnetic stimulation is more effective in suppressing centrally than peripherally originated pain states[34]. It provides short-term analgesic effects by stimulating the motor cortex or dorsolateral prefrontal cortex in various type of chronic pain patients[34][35][36]. However, the precise mechanism of actionis still not clear, and the clinical utility of the technique is limited by practical obstacles (too short analgesic effects, availability of the equipment limited to few specialized centers)[24].

A variety of pharmacological treatments have been trialed in patients with neuropathic pain,including conditions that are known to involve central sensitisation. However, some of these treatments are still under investigation and are not in widespread clinical use.