What is Manual Therapy?[edit | edit source]

The application of the Maitland concept can be on the peripheral or spinal joints, both require technical explanation and differ in technical terms and effects, however the main theoretical approach is similar to both[4].
The concept is named after its pioneer Geoffrey Maitland who was seen as a pioneer of musculoskeletal physiotherapy, along with several of his colleagues[5][2].

Decisions Which Need to be Made[4][edit | edit source]

How to Choose the Direction[edit | edit source]

Different Types of Mobilisation: How Many Glides?[edit | edit source]

Each joint has a different movement arc in a different direction to other joints and therefore care needs to be taken when choosing which direction to manipulate; this is where the Concave Convex Rule comes into use, but for now consider the number of possible glides a clinician may use:[edit | edit source]

Concave Convex Rule: Up, down, Left or Right?[edit | edit source]

How to Choose the Grade: How Far into Range and Quickly or Slowly?[edit | edit source] 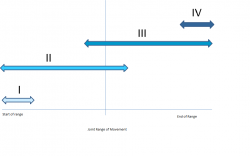 Therapeutic Effect: How and Why Does This Work; Mechanisms of Action[edit | edit source]

Hypertension ('the silent killer') is common in the developed world due to poor diet, high stress and sedentary lifestyle many people adopt and surprisingly 30% of people may be unaware of its serious consequences[19]. Hypertension is one of the biggest causes of stroke but also can be used as a warning sign for the risk a patient has of having a stroke. Therefore it should be used to ensure there is no risk to a patient by performing cervical manual therapy. Worryingly, Frese et al (2002)[20] surveyed 597 physiotherapists and found 47% of respondents "never measured BP" with 4.4% reporting always checking. The most common reason chosen for the decision not to check BP was that it is "not important for my patient population". This is a concern due to the numbers of people suffering from hypertension, obesity and other known risk factors for hypertension and stroke surely it should be important for any patient population.