Functional Anatomy of the Hip-Bones and Ligaments

Original Editor - Ewa Jaraczewska based on course of Rina Pandya 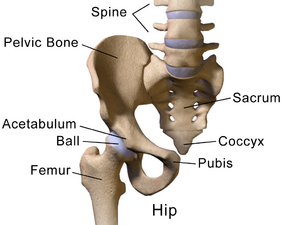 "Our goal as therapists turns out to be that we alleviate the pain, enhance the movement mechanics, and also to reduce the work of the body, the energy expenditure, in order for the body to move effortlessly, seamlessly as much as possible". Rina Pandya

The hip joint is a ball-and-socket joint that provides stability for the body and is able to withstand forces that exceed total body weight many times. The hip joint is able to accept these large loads because of the combined work of the static and dynamic elements of the joint paired with proper body alignment.

The movements that occur in the hip joint are:

Hip (thigh) circumduction is a movement performed in two planes: sagittal and frontal

The hip joint has two bony structures: the acetabulum and the femoral head connected to the femoral shaft via the femoral neck. They contain the trabeculae (i.e. the supportive, connective tissue element that forms in cancellous bone). The growth of the trabeculae follows the lines of stress along the bone and it accepts the high forces that cross the joint.[1] During single-leg stance, these forces are two and a half times bodyweight, and during running, they increase to five times body weight. Wolff's law explains the formation of the trabecular pattern.

Wolff's law: a living bone will react to the mechanical forces exerted on it. These forces can be static or dynamic, internal or external. Internal forces are dynamic. External forces can be dynamic or static. Gravity is an example of static force. Weight-bearing is considered a dynamic force. The bone will go through a process of remodelling when the load is increased. As a result, it becomes stronger and can resist loading.[1][2]

"Knowledge of the trabeculae is extremely important because it will teach us and the body how to dissipate weight in the most energy-efficient manner". Rina Pandya

In this classification system, displacement is graded based on where the medial compressive trabecular sits:[2] 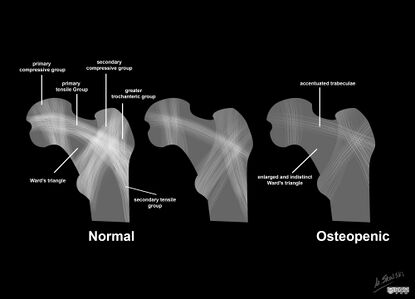 Ward's triangle is located in the femoral neck at the intersection of three trabecular bundles. It is the area of the lowest bone mineral density and is, thus, susceptible to trauma. A systematic review and meta-analysis of over 20 randomised controlled trials by Zhou et al.[3] found that some forms of exercises (eg. Tai Chi) can improve bone mineral density in Ward's triangle. 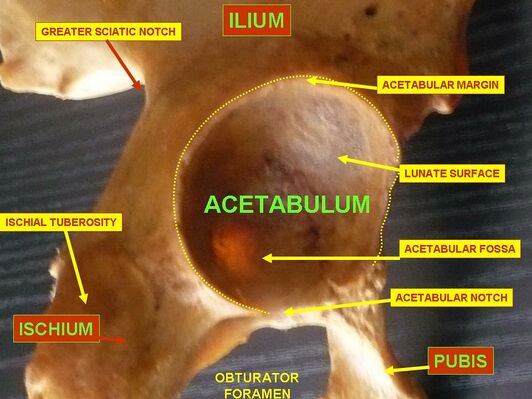 The femoral head completes the proximal aspect of the femur, which is the strongest bone in the human body. The head is pointed in a medial, superior, and slightly anterior direction. There are two bony protrusions on the femur known as the greater and the lesser trochanters. They serve as attachment points to the muscles responsible for hip and knee motion. The femoral head connects to the femur via the femoral neck which extends to the femoral shaft. The shaft has a mild anterior arch. Distally, the medial and lateral condyles join the femur to the tibia. The inclination angle is the angle between the femoral shaft and neck. On average, this angle is 128 degrees, but it tends to decrease as we age.[6] 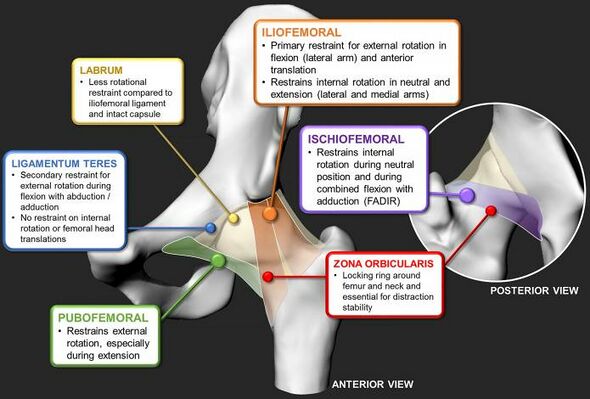 Ligaments of the Hip Joint

There are two intra-articular ligaments:

The extra-articular ligaments are primary hip joint stabilisers and they include:[1] 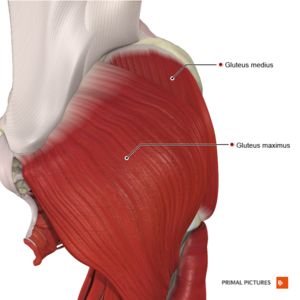 There are five bursae in the hip joint. Their primary role is to reduce friction between the bony components of the joint and the surrounding muscles.

The following is a list of hip bursae and their locations:[11]