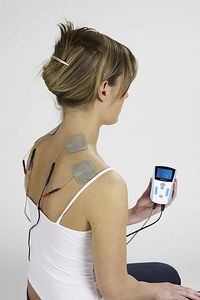 TENS is a method of electrical stimulation which primarily aims to provide a degree of symptomatic pain relief by exciting sensory nerves and thereby stimulating either the pain gate mechanism and/or the opioid system. The different methods of applying TENS relate to these different physiological mechanisms. The effectiveness of TENS varies with the clinical pain being treated, but research would suggest that when used ‘well’ it provides significantly greater pain relief than a placebo intervention. There is an extensive research base for TENS in both the clinical and laboratory settings and whilst this summary does not provide a full review of the literature, the key papers are referenced. It is worth noting that the term TENS could represent the use of ANY electrical stimulation using skin surface electrodes which has the intention of stimulating nerves. In the clinical context, it is most commonly assumed to refer to the use of electrical stimulation with the specific intention of providing symptomatic pain relief. If you do a literature search on the term TENS, do not be surprised if you come across a whole lot of ‘other’ types of stimulation which technically fall into this grouping.

The illustrations shows a 2 channel TENS unit as it has 4 lead wires (Each channel has two lead wires) with electrode pads attached. 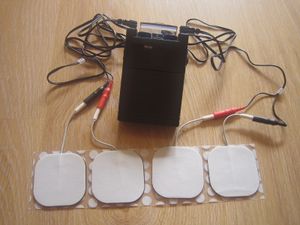 The type of stimulation delivered by the TENS unit aims to excite (stimulate) the sensory nerves, and by so doing, activate specific natural pain relief mechanisms. For convenience, if one considers that there are two primary pain relief mechanisms which can be activated : the Pain Gate Mechanism and the Endogenous Opioid System, the variation in stimulation parameters used to activate these two systems will be briefly considered.

Pain relief by means of the pain gate mechanism involves activation (excitation) of the A beta (Aβ) sensory fibres, and by doing so, reduces the transmission of the noxious stimulus from the ‘c’ fibres, through the spinal cord and hence on to the higher centres. The Aβ fibres appear to appreciate being stimulated at a relatively high frequency HF (in the order of 90 - 130 Hz or pps). It is difficult to find support for the concept that there is a single frequency that works best for every patient, but this range appears to cover the majority of individuals. Clinically it is important to enable the patient to find their optimal treatment frequency – which will almost certainly vary between individuals. Setting the machine and telling the patient that this is the ‘right’ setting is almost certainly not going to be the maximally effective treatment, though of course, some pain relief may well be achieved.

An alternative approach is to stimulate the A delta (Aδ) fibres which respond preferentially to a much low frequency LF (in the order of 2 - 5 Hz), which will activate the opioid mechanisms, and provide pain relief by causing the release of an endogenous opiate (encephalin) in the spinal cord which will reduce the activation of the noxious sensory pathways. In a similar way to the pain gate physiology, it is unlikely that there is a single (magic) frequency in this range that works best for everybody – patients should be encouraged to explore the options where possible.[1]

A third possibility is to stimulate both nerve types at the same time by employing a burst mode stimulation. In this instance, the higher frequency stimulation output (typically at about 100Hz) is interrupted (or burst) at the rate of about 2 - 3 bursts per second. When the machine is ‘on’, it will deliver pulses at the 100Hz rate, thereby activating the Aβ fibres and the pain gate mechanism, but by virtue of the rate of the burst, each burst will produce excitation in the Aδ fibres, therefore stimulating the opioid mechanisms. For some patients this is by far the most effective approach to pain relief, though as a sensation, numerous patients find it less acceptable than some other forms of TENS as there is more of a ‘grabbing’, ‘clawing’ type sensation and usually more by way of muscle twitching than with the high or low frequency modes.

TENS as a treatment technique is non invasive and has few side effects when compared with drug therapy. The most common complaint is an allergic type skin reaction (about 2-3% of patients) and this is almost always due to the material of the electrodes, the conductive gel or the tape employed to hold the electrodes in place. Most TENS applications are now made using self adhesive, pre gelled electrodes which have several advantages including reduced cross infection risk, ease of application, lower allergy incidence rates and lower overall cost. Digital TENS machines are becoming more widely available and extra features (like automated frequency sweeps and more complex stimulation patterns) are emerging, though there remains little clinical evidence for enhanced efficacy at the present time. Some of these devices do offer pre-programmed and/or automated treatment settings.

The Evidence for TENS for Pain Control[edit | edit source]

A 2020 review suggests that the use of TENS has positive outcomes in treatment of Primary Dysmenorrhea[5].

A 2014 study set out to provide a critical review of the latest basic science and clinical evidence for TENS. Key findings were: