The word "Dys" in the term Scapular Dyskinesia refers to the loss of normal scapular mechanics, motion and physiology. Scapular winging is however a clinical observation wherein any part of the scapular departs excessively from the thorax soon after movement is initiated and persists in its disconnect fashion throughout the arm movement. Scapular dyskinesia is considered impairment with a causative origin, hence it isn't a considered to be a condition on its own. 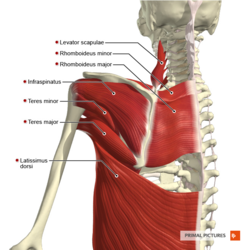 Typical movement of the scapula occurs in the sagittal, coronal, and transverse planes. The primary movements consist of two translations: superior/inferior, and protraction/ retraction, as well as three rotations: upward/downward, internal/external, and anterior/posterior. Upward rotation is primary and posterior tilt secondary during normal overhead UE elevation with internal/external rotation being minimal until 100°. [1],[2]


Burkhart et al [5] has used the acronym SICK to refer to the syndrome associated with scapular dyskinesia. “SICK” Scapula Syndrome refers to Scapular Malpositioning, Inferior medial border prominence, Coracoid pain and malposition and DysKinesis of scapular movement. It’s an overuse Syndrome. The scapula is protracted and is in anteriorly tilted position secondary to tight pec minor or short head of the biceps at the insertion to the coracoid process. Coracoid tenderness is an important sign of scapular dysfunction, which is secondary to constant traction from tightness at the tendon’s insertion. Dysrhythmia is defined as early or excessive scapular elevation or shrugging on arm elevation and/or a rapid downward rotation during arm lowering, or a non-smooth or stuttering motion during these actions.

Current tests and measures, while proven to be reliable, have not altogether shown strong validity by demonstrating correlation with biomechanical motion, symptoms, pathology, or outcomes.[9]

Recommendations for appropriate clinical measures include:

1. Determining the presence or absence of dyskinesia

Kibler classification of dysfunction Type 1, 2, or 3 (see video above) or Scapular Dyskinesis Test (SDT) recommended by McClure et al.  It is recommended that to perform forward flexion/arm elevation with maximum elevation 3-5 times to reproduce dyskinesia. If the examiner isn't sure about the presence of dyskinesia a 3-5 pound weight is added in each hand and the subject is asked to perform 10 reps of arm elevation inflexion.[10][11]Scapular dyskinesia is more observable in the descent phase of arm motion, prominence of the medial border indicated a positive dyskinesis test.

Scapular retraction test'.[12]This test evaluated the rotator cuff strength in scapular dyskinesia. Baseline AROM and pain are evaluated.  This test is positive if the pain is reduced as the therapist assists active elevation by applying a posterior tilt and external rotation motion to the scapula. This application may be used in conjunction with other tests such as Neer's, Hawkin's-Kennedy, and Jobe's relocation.

Scapular assistance test'.[13] This test helps to evaluate scapular contributions to the existing shoulder pain based on alterations in motion. The baseline AROM and pain are evaluated.  The therapist then applies an assist to scapular dynamics.  This test is positive if ROM is increased or pain is reduced as the therapist manually assists scapular upward rotation during active UE elevation.

Isometric Scapular Pinch test: The patient in a standing position and is asked to actively squeeze or retract the scapulae together as hard as possible. Normal Response: An individual able to hold the squeeze for 15 to 20 sec without any burning pain or noticeable weakness. Positive: Burning pain present. Watch for: the patient relaxing the contraction.

Scapular Load test: As in position (2) for LSST, Manual load is applied in the anterior, posterior, inferior or superior direction to the arm, and the scapula should not move more than 1.5 cm.

Wall pushup test: The patient performs wall pushups 15 to 20 times. Weakness of scapular muscles (mainly serratus anterior) or winging usually shows up with 5 to 10 pushups. For stronger or younger populations, perform the test on the floor.

Current measures examine mm length at resting positions, not at maximal length.  Unfortunately, there are no validated clinical measures to identify a patient as having a tight pectoralis minor muscle.

An example of a home exercise program in the management of scapular dyskinesis.