Scapulohumeral rhythm (also referred to as glenohumeral rhythm) is the kinematic interaction between the scapula and the humerus, first published by Codman in the 1930s. [1] 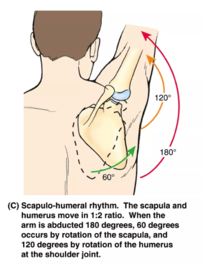 The interplay of 4 articulations (Sternoclavicular Joint, Acromioclavicular Joint, Scapulothoracic Joint and Glenohumeral Joint) of the shoulder complex, results in a coordinated movement pattern of the arm elevation. The involved movements at each joint are continuous, although occurring at various rates and at different phases of arm elevation. The movement of the scapula can be described by rotations in relation to the thorax. The scapula moves around a dorso-ventral axis, resulting in a rotation in the frontal plane. In this movement the glenoid cavity is turned cranially (upward rotation) or caudally (downward rotation). In the sagittal plane, around a latero-lateral axis the scapula rotates posteriorly (posterior tilting) or anteriorly (anterior tilting). External and internal rotation occurs around a cephalo-caudal (longitudinal) axis. The external rotation brings the glenoid cavity more into the frontal plane, whereas the internal rotation turns the glenoid cavity more to the sagittal plane. [4]

When we perform abduction, the GH-joint contributes 90-120°. The combination of scapular and humeral movement result in a maximum range of elevation of 150-180°. [8] [9] Also by abduction Inman et al. reported an inconsistent amount and type of scapular motion in relation to GH-motion this time during the initial 30°. [5] In this early phase, motion occurs primarily at the GH joint, although stressing the arm may increase the scapular contribution. [6]

Scapulohumeral rhythm or ratio is significantly greater (less scapular motion and more humeral motion) in the sagittal plane than other planes. Consistent with the findings, the dominant side demonstrated significantly higher values for SH rhythm than the non-dominant side but only in the coronal and scapular planes but not in the sagittal plane. [9] By healthy male is a significant difference by hand dominance only in scapular upward rotation during scapular plane arm elevation.[7]

The scapulohumeral rhythm is therefore defined as the ratio of the glenohumeral movement to the scapulothoracic movement during arm elevation. This is most often calculated by dividing the total amount of shoulder elevation (humerothoracic) by the scapular upward rotation (scapulothoracic). [4]

In the literature Scapulohumeral rhythm is descibed like a ratio: humeral elevation:scapulothoracal rotation. The overall ratio of 2:1 during arm elevation is commonly used. According to the 2-to-1 ratio frame-work, flexion or abduction of 90° in relation to the thorax would be accomplished through approximately 60° of GH and 30° of ST motion. In another study of Scapulohumeral rhythm between children and adults, the mean ratio for the scapular plane was 2.4:1 for adults, 1.3:1 for children. [5]

Ratios are often described as nonlinear indicating changing ratios during ROM. The 2 to 1 ratio substantially varies in scapular and humeral contributions at different points in the ROM and among individuals.

It has been reported that scapular dyskinesis occurs in 68 - 100 % of patients with shoulder injuries (including glenohumeral instability, rotator cuff abnormalities, and labral tears. [8] Other studies showed that scapular upward rotation is significantly increased in patients with full-thickness rotator cuff tears compared with controls in both sagittal and scapular plane elevation. Also, an increased scapular component is generally thought to contribute to the scapulohumeral rhythm ratio in frozen or stiff shoulders. [9]

Given the role of the scapula in shoulder function, the ability to monitor the coordinated motion of the scapula and humerus (scapulohumeral rhythm) may have clinical implications when dealing with overhead athletes and patients with shoulder pathologies. [1]

Sports participation results in slight differences in side-to-side motion and in scapular resting position in overhead athletes. [5] [4] Overhead athletes have some asymmetry in scapular upward rotation and scapulohumeral rhythm ratio between dominant and non-dominant shoulder. It should not be considered automatically as a pathological sign but rather an adaptation to sports practice and extensive use of upper limb. [9]

People with higher BMI have scapula kinematic patterns different from people with lower BMI. They have increased scapula upward rotation during arm elevation. [6]

Scapulohumeral rhythm is a common metric for assessing muscle function and shoulder joint motion.[7] There is a three-dimensional scapular kinematic pattern during normal arm elevation that include upward rotation, posterior tilting and varying internal/external rotation dependent on the plane and angle of elevation. [1] [2] When there is a changement of the normal position of the scapula related to the humerus, the scapulohumeral rhythm is disturbed.

Alterations in scapular position and control afforded by the scapula stabilizing muscles are believed to disrupt stability and function of the glenohumeral joint [2] [11] [12], thereby contributing to shoulder impingement, rotator cuff pathology and shoulder instability. [1]

Inman, Saunders and Abbott were the first to measure scapulohumeral rhythm using radiography and suggested what became the widely accepted 2:1 ratio between glenohumeral elevation and scapulothoracic (ST) upward rotation (SUR). [8]

The Simple Shoulder Test (SST) is an internationally used patient-reported outcome for clinical practice and research purposes. It was developed for measuring functional limitations of the affected shoulder in patients with shoulder dysfunction and contains 12 questions (yes/no). It is a reliable and valid instrument for evaluating functional limitations in patients with shoulder complaints. [11]

Observation and examination of the scapulohumeal rhythm is commonly performed by physical therapists during postural and shoulder examinations. The notion of a proper "rhythm" is routinely used to describe the quality of movement at the shoulder complex.[2]

The inclinometer is capable of measuring angles (in degrees) from a horizontal reference to assess static positions of scapular upward rotation, this upward rotation can easily be used by clinicians when evaluating the scapular motion. Different authors have demonstrated that these clinical assessments give valid and accurate information regarding scapular kinematics. [6] [7] [2]

Linear assessment using tape measures can be used to examine possible asymmetries and patterns of abnormal motion between the pathological and healthy scapula. This examination is based on simple bilateral visual observation of scapular position. [12] Although this method is a subjective approach, research gave evidence that it is a qualitative method. [1]

Quantitative measurement of scapular positioning can also be achieved with LSST (lateral scapular slide test). This test evaluates the scapular symmetry while varying loads are placed on the supporting musculature. Three positions of the upper extremities are proposed:

Two measurements are performed using a tape in each position (between the inferior angle of the scapula and the closest spinous process) in order to allow calculation of an average value. [6]

A 1.5-cm asymmetry in any of the positions is established as a threshold for an abnormal pattern.

Another test is the SDT (scapular dyskinesis test). The SDT is a visually based test for scapular dyskinesis that involves a patient performing weighted shoulder flexion and abduction movements while scapular motion is visually observed. This test consists of characterising scapular dyskinesis as absent or present and each side is rated separately. Dyskinesis is defined as the presence of either winging (prominence of any portion of the medial border or inferior angle away from the thorax) or dysrhythmia (premature, or excessive, or stuttering motion during elevation and lowering). [9] Good inter-rater reliability of this test (75–82% agreement; weighted κ=0.48–0.61) was achieved. [5]

Optimal rehabilitation of scapulohumeral rhythm disorders requires addressing all the causative factors that can create the dyskinesis and then restoring the balance of muscle forces that allow scapular position and motion. [7]

It is essential to make a diagnosis about the cause of the scapulohumeral rhythm disfunction before starting physical therapy. For example ‘Winged scapula’ of the scapula may be caused by a paresis of the m. Serratus Anterior or by a disfunction of the m. Trapezius.

Both passive and active movement disturbances can cause a scapulohumeral rhythm disfunction. Causes may be: shortening of muscles like m. Pectoralis Minor, m. Latissimus Dorsi and m. Levator Scapulae, shortening of the posterior joint capsule and/or lack of coordination between essential muscles like the m. Serratus Anterior, m. Trapezius and Rotatorcuff muscles. [2]

It may be clear that every therapy should be individualized.

Lengthening of muscles or connective tissue must be done by stretching and/or active and passive mobilisations. It’s important that the patient gets a home exercise program to continue stretching and mobilizations. [1] Middle thoracic manipulations in seated position have no influence on the scapulohumeral rhythm and scapular kinematics during arm flexion and thus should be avoided. [12]

Training the coordination between muscles should be done in two phases. Phase one will include the ‘setting’ of the muscles. In this phase the patient will learn how to subtle contract his muscles. Tactile feedback or myofeedback may be necessary during this phase. Practicing at home is important to train the duration of muscle contraction and train in other positions so that contraction is possible in every posture of daily life. In phase two the contraction should be automated. This can be trained with stabilisation exercises. Exercises on the back should be avoided because muscles should stabilise the scapula instead of the ground. The stabilisation exercises should be static and dynamic. [1] Examples of exercises are: push up plus, press-up, low-rowing, horizontal abduction, serratus punch and dynamic hug. [1]

Muscles should be trained in functional patterns (sport or activity specific patterns) instead of isolated patterns because it will cause maximal scapular muscle activations. [6]

With shoulder patients you should always be aware of the influence on the spine. Some patients could have a high degree of Thoracic Hyperkyphosis. Which can be treated with active and passive mobilisations of the thoracic spine. [12]