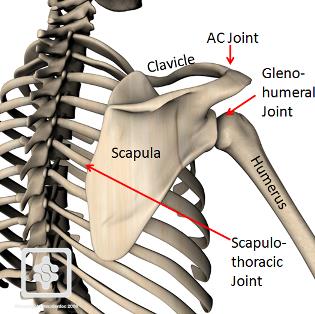 Movements of scapulothoracic joint are a very important element of shoulder kinesiology. The wide range of motion available to the shoulder joint is due to the large movement available at ST joint.[5]

The motions of the scapula from the resting or reference position includes three rotations that occur at the AC joint. These are:

The scapula also has available translatory motions of scapular elevation/depression and protraction/retraction. The linkage of the scapula to the AC and SC joints prevents scapular motions both from occurring in isolation and from occurring as true translatory motions. Instead, scapular motions on the thorax must occur in combinations, such as the simultaneous upward rotation, external rotation, and posterior tipping that occur when the arm is abducted.

Stability of the scapula on the thorax is provided by the structures that maintain integrity of the linked AC and SC joints. The muscles that attach to both the thorax and scapula maintain contact between these surfaces while producing the movements of the scapula. In addition, stabilization is provided through the ST musculature by pulling or compressing the scapula to the thorax.[6] [1]
The ultimate functions of scapular motion are to orient the glenoid fossa for optimal contact with the maneuvering arm, to add range to elevation of the arm, and to provide a stable base for the controlled motions between the humeral head and glenoid fossa. The scapula, with its associated muscles and linkages, per-forms these mobility and stability functions so well that it serves as a premier example of dynamic stabilization in the human body.[1]

Because it is not a true joint, it does not have a capsular pattern nor a close packed position.[2]

The resting position of this joint is the same as  for the acromioclavicular joint i.e arm by side.[2]