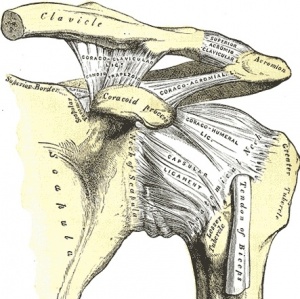 The Acromioclavicular Joint, or AC Joint, is one of four joints that comprises the Shoulder complex. The AC Joint is formed by the junction of the lateral clavicle and the acromion process of the scapula and is a gliding, or plane style synovial joint. The AC Joint attaches the scapula to the clavicle and serves as the main articulation that suspends the upper extremity from the trunk [1].

The primary function of the AC Joint is:

The AC Joint is the articulation between the lateral end of the clavicle and a small facet on the acromion of the scapula. The articular facets are considered to be incongruent, in that they vary in configuration. They may be flat, reciprocally concave-convex, or reversed (reciprocally convex-concave). The inclination of the articulating surfaces varies from individual to individual. 3 joint types are described in which the angle of inclination of the contacting surfaces varied from 16 to 36 degrees from vertical. The closer the surfaces were to the vertical, the more prone the joint was to the wearing effects of shear forces. Given the variable articular configuration, intra-articular movements for this joint are not predictable.[2] [4]

The AC Joint capsule and ligaments surrounding the joint work together to provide stability and to keep the clavicle in contact with the acromion process of the scapula.

The AC Joint has a thin capsule lined with synovium. The capsule is weak and is strengthened by capsular ligaments both inferiorly and superiorly, which in turn are reinforced through attachments from the deltoid and trapezius.[4] Without the superior and inferior capsular ligaments, the AC Joint capsule would not be strong enough to maintain the integrity of the joint.[5] 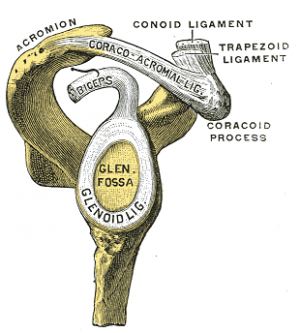 The disc of the AC Joint is variable in size between individuals, at various ages within an individual and between sides of the same individual. Through the 1st 2 years of age, the joint is actually a fibro-cartilaginous union. With use of the upper extremity, a joint space develops at each articulating surface that may leave a meniscoid fibrocartilage remnant within the joint.[2]

The clavicle serves as an attachment for many of the muscles that act on the upper extremity and head, these include:

Movement of the Scapulothoracic Joint are generally considered to be a combination of Sternoclavicular and Acromioclavicular motion.[7] Motion of the AC Joint are described as scapular movement with respect to the clavicle, including[8]:

The closed packed position of the AC Joint occurs when the Glenohumeral Joint is abducted to 90 degrees.

The open packed position of the AC Joint is undetermined.

The AC Joint is extremely susceptible to both trauma and degenerative change. This is due to its small and incongruent surfaces that result in large forces per unit area. Degenerative change is common from the 2nd decade on, with the joint space itself commonly narrowed by the 6th decade.[2]

Why are the Acromio-Clavicular Joint Injuries Relatively Common?

The acromio-clavicular joint injuries are relatively common accounting for about 40%[10] of all shoulder injuries in contact sports[4], due to the nature of its surface which is highly slope. Striking the tip of the shoulder over any hard surface will lead to the dislocation of the joint due to the medially and inferiorly directed force toward the shoulder. The loads over the joint will be resisted primarily by the the joint’s superior and inferior capsular ligaments, and if the loads exceed the ability of the later two ligaments, the coracoclavicular ligament will offer a secondary resistance to horizontal shear[11], which if failed to endure this great load, its disruption will occur and the AC joint will dislocate or subluxate depending on the intensity of the loads. [4]