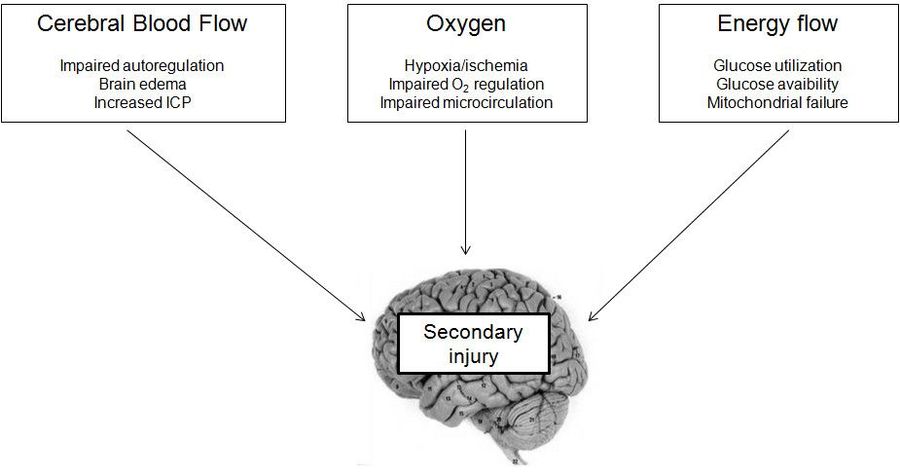 These pathophysiological events impair cell function impacting movement, memory and learning ability as well as potentially causing damage to white matter structure. They are described in more detail below.

Multiple factors can initiate these vasodilation or vasoconstriction cascades, including; [4] 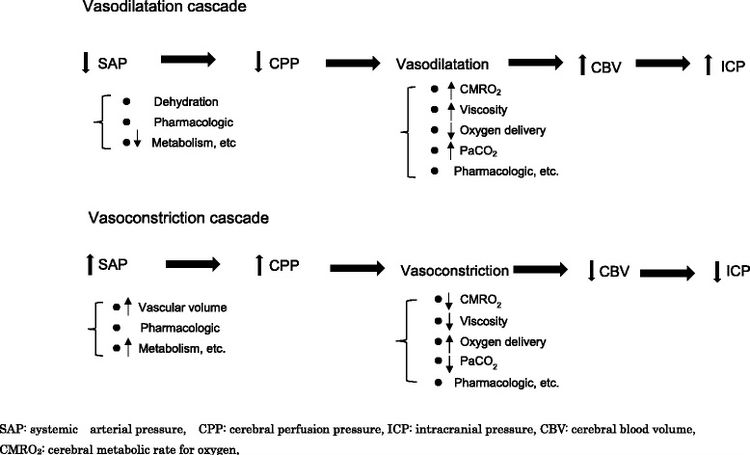 Vasodilation and Vasoconstriction Cascade in the Cerebral Blood Volume and Intracranial Pressure Regulation.  Vasodilation and vasoconstriction cascade in the cerebral vasculature. This cascade model was first described by Rosner in the 1990s (see references 22, 23). A cascade of this type is often trigged by changes in CPP. Any step in the cascade, however, can be triggered as the starting point. There are many triggering factors such as dehydration, vascular volume, systemic metabolism, CMRO2, blood viscosity, systemic oxygen delivery, PaCO2, or certain pharmacologic agents. SAP systemic arterial pressure, CPP cerebral perfusion pressure, ICP intracranial pressure, CBV cerebral blood volume, CMRO 2 cerebral metabolic rate for oxygen. [5]

Cerebral perfusion pressure is the difference between the systemic arterial pressure and the intracranial pressure. The normal range of this difference is between 50 and 70 mmHg.

The following clinical mechanisms contribute to the dysregulation of the mechanisms that usually maintain volume and pressure:

Both hypoperfusion and hyperperfusion is related to the difference between cerebral blood flow and cerebral metabolism and oxygen consumption. Therefore, decreased CBF with a normal metabolic rate creates ischemic conditions.

Cerebral ischemia is a state of decreased blood supply of the brain (hypoperfusion) and leads primarily to metabolic stress and ionic perturbations.[6] Coexisting traumatic damage such as structural injury of cell bodies, astrocytes and microglia, cerebral vascular and endothelial damage intensify the brain tissue damage. The factors involved in post-traumatic vasospasm and contributing to resultant ischaemia include:

TBI frequently leads to focal or global cerebral ischemia and its presence points towards poor clinical outcome like persistent vegetative state or death.

The mechanism responsible for oedema formation and intracranial pressure increase is hyperaemia. Due to reduced proximal cerebrovascular resistance and increased cerebral blood volume and vessel dilatation the impaired brain blood barrier causes an excess of fluids to reside in vascular bed. This pathology is equally detrimental to brain tissue as ischemia causing an increase in intracranial pressure. Oedema is a common result of traumatic brain injury and can be vasogenic or cytotoxic and can cause ICP increase and secondary ischemia.

Cerebral metabolic disfunction relates to oxygen and glucose depletion as well as reduced cerebral energy state at the period of post traumatic hypermetabolic demand. Hypermetabolism is pathophysiological phenomenon following TBI and occurs as a result of transmembrane ionic influx leading to overexcitation and uncoupling with cerebral blood flow. The extent of primary injury is reflected by the extent of pathophysiological processes like mitochondrial dysfunction related to decreased respiratory rates and ATP production, depletion of the nicotinic co-enzyme pool, intramitochondrial accumulation of calcium ions leading to metabolic failure.[6] The overload of excitatory amino acid neurotransmitters results in overstimulation of ionotropic and metabotropic glutamate receptors with consecutive calcium, sodium and potassium ions flow triggering brain blood barrier breakdown and cellular compensatory ATPase activity increase resulting in aggravated metabolic demand. The cascade of mismatched processes of overflow and metabolism creates excitotoxicity. TBI metabolic failure is also related to imbalance between oxygen supply and oxygen consumption and leads to hypoxia. The extent of the hypoxia and its duration determines the clinical outcome. Therefore, measuring brain oxygenation is one of the standard measurements along with ICP and CPP. The oxidative stress related to imbalance of free radicals and endogenous antioxidants availability can lead to immediate cell death or inflammatory processes or apoptosis. 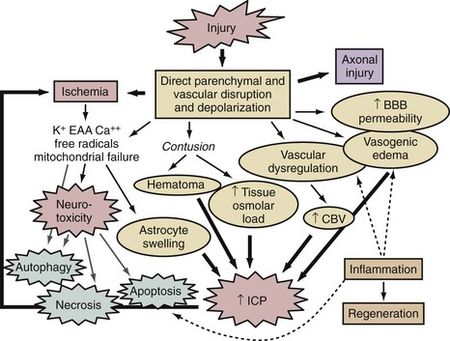 Categories of biochemical, cellular, and molecular mechanisms involved in the evolution of secondary damage after ischemic or traumatic brain injury. Three major categories of secondary mechanisms include: 1) Ischemia, excitotoxicity, energy failure, and cell death cascades; 2) Cerebral Swelling; and 3) Axonal Injury 4) A fourth category, inflammation and regeneration, influences each of these cascades. [7]

Cell death and axonal injuries contribute to the extent of the traumatic brain injury. The main death processes are known as necrosis and apoptosis. Apoptotic and necrotic neurons are present even in mild injuries and can be found in areas distant from the injury impact area. Degenerating oligodendrocytes and astrocytes are present in the white matter of primary injury area.

Necrosis (cell death) occurs after the first few hours following an insult to brain tissue, mechanical or hypoxic, and is related to cell membrane damage and uncontrolled release of cell death products. The blood brain barrier becomes impaired and white matter injury usually increases. The resulting detritus is interpreted as an ‘antigen’ and triggers inflammatory process and scaring.

Several groups of proteins and biochemical transitional pathways are involved in cell death mechanisms and their tracking might create new therapeutic opportunities limiting neurodegeneration and resulting disabilities especially with apoptosis providing the window of opportunity for therapy due to its delayed nature.

Morphologically, axons with their long structure are at significant mechanical risk during the impact of external forces. Sheering or stretching of axons results in primary axotomy or when damage incomplete they trigger secondary axon degeneration. There are some localities of the brain with greater vulnerability such as the junction of grey and white matter. Myelination might provide some protective features and enhance recovery. The pathophysiological mechanisms involved in axonal damage also include swelling of intact axons and “retraction bulbs”. [1] 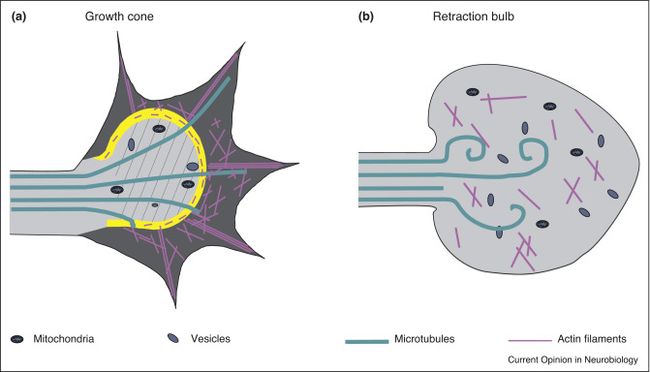 Cytoskeletal Organization in Growth Cones versus Retraction Bulbs. (a) Growth cones display three distinct regions. The center (C-domain, grey stripped area) contains microtubules which emerge from the axonal shaft. In the periphery (P-domain, dark grey area), a dense network of actin filaments controls the progression of microtubule toward the axon tip and excludes vesicles and organelles from the P-domain. This obstacle occurs at the border between the C-domains and the P-domains, the transition domain (T-domain, yellow arc).  (b) Regeneration failure is associated with the formation of a retraction bulb at the tip of the injured axon. The separation between C-domain, T-domain and P-domain is lost. In addition, microtubules are depolymerized to a large extent. The remaining ones are disorganized and do not reach the axon tip. [8]

Axonal damage due to deafferentation interrupts established pathways and can cause focal and diffused injury immediately after or even after several years from the primary insult. The extent of deafferentation in mild to severe injuries and axonal damage impacts the ability of synaptic sprouting of undamaged axons. The more severe the injury with extensive secondary damage, the less possible axonal reconnection and function recovery.

A severe diffuse axonal injury with finding as Grade 2 and additional focal lesions in the brainstem.

The Diffuse Axonal Injury is a severe form of brain injury and is usually diagnosed after a traumatic brain injury with Glasgow Coma Scale (GCS) < 8 for more than six consecutive hours. Diffuse Axonal Injury features in Computed Tomography (CT) and present as small punctate haemorrhages to white matter. However, CT Head has a low yield in detecting Diffuse Axonal Injuries and Magnetic Resonance Imaging (MRI), specifically Diffuse Tensor Imaging (DTI), is the imaging modality of choice for diagnosis of diffuse axonal injury.