Globally, epilepsy is one of the most common neurological diseases, particularly among children. Epilepsy is not a single disorder; it has many causes that share the hallmark of a seizure, when brain function is disrupted, often dramatically.

Seizures and epilepsy have been documented since the earliest civilizations. Most individuals with epilepsy were thought to be possessed being thought that the gods “seized” a person at the time a convulsion[2].

What is Epilepsy[edit | edit source]

Epilepsy is a chronic disorder, the hallmark of which is recurrent, unprovoked seizures. A person is diagnosed with epilepsy if they have two unprovoked seizures (or one unprovoked seizure with the likelihood of more) that were not caused by some known and reversible medical condition eg alcohol withdrawal, hypoglycemia.[3] Epilepsy means the same thing as "seizure disorders." 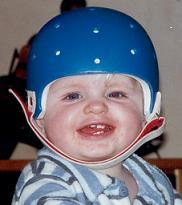 The reason why epilepsy develops is not fully understood. Common causes of seizures vary by age of onset:

Image: Protective helmet for a baby with epilepsy.

According to the Centers for Disease Control and Prevention (CDC), around 35% of all children with cerebral palsy will experience seizures. There are different types of seizures, and the symptoms will depend upon what form the child experiences.

There are more than 40 types of epilepsy, which are divided into two groups according to the site of seizure onset. In 2017, the International League Against Epilepsy (ILAE) developed a new classification system for seizures.

Initial classification is by type of onset:

All seizures are then classified (if possible) as 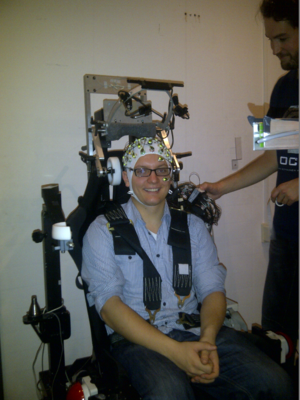 Diagnosing seizures and the type of epilepsy is like putting the pieces of a puzzle together and includes information from many people and different tests.

Image: EEG being performed on human volunteer. EEG is the key tool for the diagnosis of epilepsy. Surface EEG provides the best overview of the approximate location of the epileptogenic zone.[6]

Saying someone has epilepsy is a little like saying that they’re sick. Its cause is diverse and can be from many things eg the result of a head injury, an inherited genetic condition, or any other disorder that affects the brain. In some cases, epilepsy is associated with other brain problems and intellectual disability. But mostly, people with epilepsy are normal between seizures and can participate in normal activities. If seizures are not controlled, then operating dangerous machines, like cars, or swimming unsupervised must be avoided[1].

Most epilepsy is well controlled with medications. Options for treatment have expanded with new drugs available, more precise diagnosis based on sophisticated imaging, and better understanding of the mechanism of epilepsy in each individual patient. In some cases, very precise detection of brain lesions can allow for a surgical cure of epilepsy. Even devices used as brain implants have been developed that can control severe epilepsy[1].

Outlook for People with Epilepsy 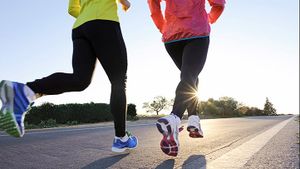 People with epilepsy should include exercise as a complementary therapy not only for seizure control but also for non-seizure conditions such as physical health promotion and psychosocial adjustment and improvement in mental state. People with epilepsy should be encouraged to exercise and efforts should be made to remove any barriers to exercise. To reach these goals, support of health authorities, social workers, sport instructors, and campaigns to inform and stimulate patients to become more active are necessary.