Management of Your Parkinson's

This information is not intended to replace your healthcare professional. Please make sure you seek medical advice if you are experiencing any symptoms of Parkinson's.

The content on or accessible through Physiopedia is for informational purposes only. Physiopedia is not a substitute for professional advice or expert medical services.

What is Parkinson's?[edit | edit source]

Parkinson's is a progressive neurodegenerative disorder of the central nervous system. It is the most common disorder of the basal ganglia and the second most common neurodegenerative condition worldwide, after Alzheimer's. The main area of basal ganglia dysfunction appears to stem from the loss of dopamine-producing cells in the substantia nigra, causing difficulty in the initiation of movement.

There are approximately 6.3 million with Parkinson's worldwide. Global diagnosis ranges from 12 to 230 per 100,000 per year. It is more regularly diagnosed in the elderly, affecting around 1% of people over 65 years of age. It can affect both males and females, but is slightly more common in males.

The exact reason why this occurs is currently unknown. However, researchers strongly believe that it is a combination of age, environmental factors and genetics that cause the dopamine-producing nerve cells to degenerate.

Unfortunately, as the specific causes are unknown, there is not enough evidence for a proven prevention currently.

People with Parkinson's present with a range of symptoms affecting function, activity, participation and quality of life. Symptoms can differ from person to person and in the same person over time.

Key motor symptoms of Parkinson's are: 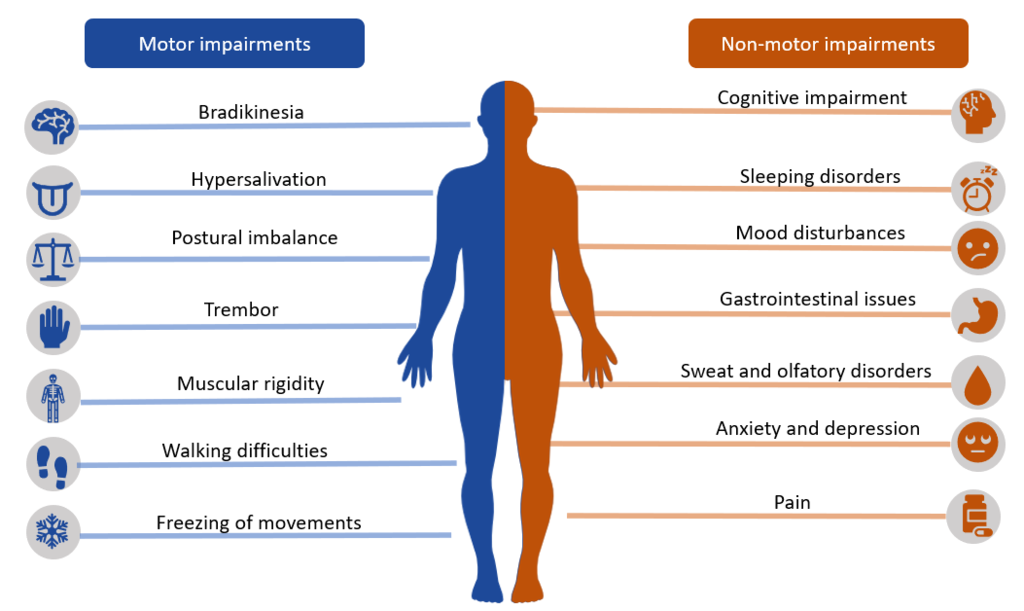 No tests can conclusively show that you have Parkinson's. The diagnosis of Parkinson's is commonly based on motor symptoms such as muscle stiffness (rigidity), tremor at rest and slowness of movement. Other symptoms such as depression, falls and sleep disturbances aid the diagnostic decision-making process.

If your doctor does suspect Parkinson's, you will be referred to a specialist. This will either be a neurologist - specialising in brain and nervous system, or a geriatrician - specialising in conditions affecting elderly people.

Being informed that you have Parkinson's can be overwhelming and an emotional experience. It is important to feel supported by a care team and your family during this time. There are a number of support groups and charities that should provide some additional information and support. There are some listed at the bottom of this page.

Discovering the right medications, complementary therapies, support and ways to stay independent can enhance your quality of life with Parkinson’s. Unfortunately, currently there is no cure for Parkinson's, but there are medications available that can help you manage your symptoms. Dopaminergic medications that increase the dopamine availability in the brain are the most common drug therapies. These medications increase or substitute for dopamine and may help you with issues such as your tremor, walking or other movements. The most commonly used medication is Levodopa.

The role of your Physiotherapist is to enable you to be active, engaged and participating socially, therefore enhancing your quality of life. Treatment, as always, should be tailored to the needs of the individual. You will be helped to make informed decisions about your care, and also involve family and carers if you choose to. You may work with other healthcare professionals such as Specialist Nurses, Occupational Therapists and Speech and Language Therapists. There is good evidence that Physiotherapy can help maintain and improve balance, strength and gait.

Below are some exercises that you may see within your exercise programme.

Squats are a great exercise for building strength in the legs, which can be important for tasks such as standing up from a chair. You can also make these harder or easier, using a chair behind you or flat surface in front of you for support. Strengthening the muscles in your legs can also improve balance. Try 3 sets of 5 to begin with.

Exercising the muscles in your arms is another fantastic way of building some strength. This can be helpful for tasks such as carrying shopping or opening jars of food. Try some bicep curls, you can do this seated or standing. Try 3 sets of 10 to begin with.

Walking and/or cueing can be a great exercise for improving balance and gait, in turn reducing the risk of falls. Cueing has been found to improve walking speed, step length and also reduce "freezing" whilst walking.

It is really important to maintain general health and wellbeing. This means consuming a balanced diet with enough vitamins and nutrients - consisting of fruit & vegetables, plenty of fluids and making sure you have enough protein.

Remember that sleep is also important for wellbeing. If you are currently struggling with sleep, then please seek advice from your healthcare professional.

Medication is also important for people with Parkinson's. Take this at the times prescribed by your doctor. You will be involved in the decision-making process with this. If you need any extra support or information then seek advice from your doctor.

There is further support and information on the management of Parkinson's below: