Biomechanics of the Hip

"Biomechanics is simply the physics (mechanics) of motion exhibited or produced by biological systems. More specifically, biomechanics is a highly integrated field of study that examines the forces acting on and within a body as well those produced by a body".[1]

When discussing hip joint biomechanics, one must consider how the bones, ligaments, and muscles transfer the weight of the body from the axial skeleton into the lower limb.[2] 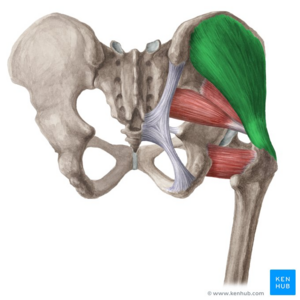 Koch first introduced the static model of hip biomechanics. According to his theory, the body lever arm and the abductor muscles lever arm has a ratio of 2:1. This means that in a single-leg stance, gluteus medius needs to generate two times the body weight's force to maintain balance and prevent the body from leaning towards the unsupported side. In this model, gluteus medius is the only muscle that provides resistance to the loads exerted on the femur. Koch proposed that gluteus medius translates these loads into tensile loads on the lateral aspect of the femur below the attachment of the gluteus medius and into compressive loads on the lateral side of the distal third of the femur. It has been noted, however, that Koch's original statement did not explain well how tensile load was converted into a compressive load in the distal part of the femur.[3]

In newborns and up until the age of four, the neck-shaft angle of the femur has a value of approximately 160-165 degrees.[4] Upright posture continues to reduce this angle until it reaches an angle of 130-135 degrees. It then remains unchanged throughout the process of body development and bone growth despite the amount of time humans spend upright and the fact that body mass continues to increase.[5]

During bilateral limb stance, the centre of gravity is located between the two hips, with an equal force exerted on both hips. The body’s centre of gravity is located approximately one centimetre anterior to the first sacral segment.[5] Gravity affects the lower extremities in the vertical direction. Under these loading conditions, the weight of the body minus the weight of both legs is supported equally on the femoral heads.[5]

Bone tissue responds to various demands, including those influenced by the environment. Specific responses include the development of a hypertrophic or an atrophic bone or an alteration in bone quality in areas of compression (cortical bone) or tensile loading (cancellous bone).[5]

Joint stability in the lower limbs depends on:[5] 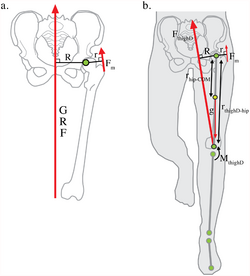 During single-leg stance, the following occur:[7]

Larger hip forces are required for people who have a wide pelvis and short femoral necks. These people have an increased lever arm ratio, and thus require an increase in abductor muscle force. These individuals tend to be at high risk for hip pathologies, including arthritic conditions.[5] However, a study by Warrener et al.[8] found that pelvic width does not predict hip abductor mechanics or locomotor cost in either women or men.

The average loads on the hip joint measured in subjects who underwent a total hip replacement were as follows:

Note: "stumbling or periods of instability during single-leg stance can generate resultant forces in excess of eight times body weight"[12]

The above numbers indicate that the highest stress on the hip joint occurs during walking and descending stairs. Development of hip pathology, eg. osteoarthritis can be predicted when these activities are performed repetitively and/or under faulty conditions. [11]

According to Koch,[3] in order to maintain hip stability, gluteus medius must generate twice the weight of the body force during a single-leg stance. However, based on different data related to hip dynamics and a complete model of stability, it has been concluded that the iliotibial band (ITB) plays a significant role in maintaining hip stability. The following observations support this theory:[5] 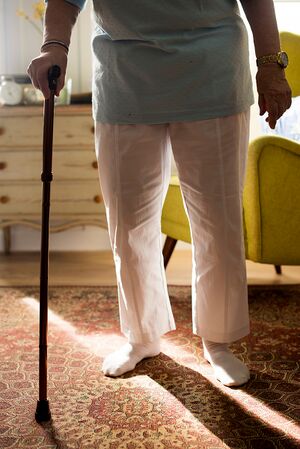 Management of hip pain should include a reduction of the joint reaction force. It can be accomplished through the following:

When a person is using a cane for support, the joint reaction force is reduced because the "cane-ground reaction force acts at a much larger distance from the centre of the hip than the abductor's muscles".[13] Even when a small load is applied through the cane, the patient is able to reduce the demand required from the abductor muscles to maintain joint stability during gait.[13]

When descending stairs, these patients demonstrate:

The physiotherapy approach to improving stair negotiation for people with osteoarthritis may include: 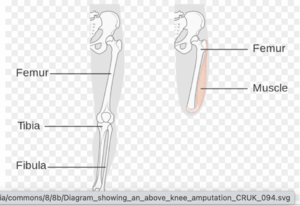 Patients with above-knee amputation exhibit a positive Trendelenburg gait pattern despite having intact hip abductors. However, in this patient group, the gluteus medius is not able to provide adequate hip stability during gait due to the loss of the iliotibial band action in providing additional joint stability.

Treatment may include the surgical technique of tenodesis of the ITB and lateral soft tissue structures to the distal femur.[5]