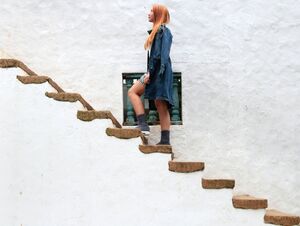 A fundamental body movement is required to ascend and descend stairs. It is important for everyday activities such as shopping, taking public transportation, or going about a multistory building or apartment. The variation between the two modes of locomotion(level-ground locomotion and stair locomotion) may be significant for a patient population.

If a patient has adequate muscle strength and joint ROM for level-ground walking, it does not ensure that the patient will be able to walk up and down stairs.

Locomotion in the stair gait involves both swing and stance phases in which forward progression of the body is brought about by alternating movements of the lower extremities. The lower extremities must balance and carry along HAT(Head, arms and trunk), similar to level ground gait.The knee extensor moment in both stair ascent and descent was nearly three times greater than that of level ground walking. The ankle moments are almost similar in both gaits. The knee has generative role in stair ascent( absorptive in level walking). Powers are mostly generative in stair ascent and absorptive in descent for all joints.

The stair gait cycle is divided into:

Vast amount of positive work is involved in stair ascent that is accomplished mainly through concentric action of the rectus femoris, vastus lateralis, soleus, and medial gastrocnemius muscles. 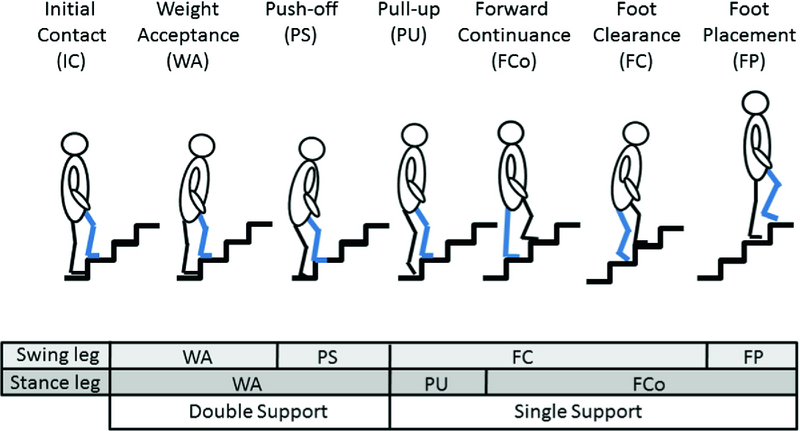 Ankle Joint - Plantarflexion: 15° of dorsiflexion to 15°–10° of plantarflexion - Soleus,Gastrocnemius,Tibialis anterior

Ankle Joint - Dorsiflexion: 10° of plantarflexion to 20° of dorsiflexion - Tibialis anterior.[1]

According to a study, it is determined, the predictors of foot clearance and amount of overhang showing that physical activity was a common predictor for both younger and older age groups. In addition, for the older group, medications and fear of falling were found to predict stair performance for most goings, while sway during single-legged standing was the most common predictor for the younger group. Older participants adapted to smaller goings by using the handrails and reducing gait velocity. The predictors of performance suggest that motor and fall risk assessment is complex and multifactorial. The results shown were consistent with the recommendation that larger going and pausing before negotiating stairs may improve stair safety, especially for older users.[2]

The below less than 3 minute video is titled: Biomechanical analysis of height and knee flexion in walking stairs