Part of the Extrapyramidal system. 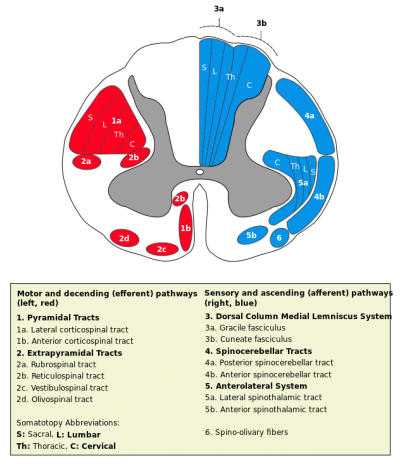 Both the lateral and medial tracts act via internuncials shared with the corticospinal tract on proximal limb and axial muscle motor neurons.[1]

In animal studies, central pattern generators (CPGs) are found to be responsible for locomotion generation. As locomotion is generated by internuncial neurons in the cervical and lumbar regions, activating the flexors and extensors, the intermediate gray matter is able to initiate rhythmical movements.[1]

The reticular formation within the pons is partly responsible for postural control functions. [3] The cortico-reticulospinal tract is involved in proximal stability and regulating postural tone. [3]

The premotor cortex is able to identify appropriate axial musculature to enable distal movement.[1] Due to the interrelation of internuncial neurons between the corticospinal and reticulospinal tracts can be responsible for controlling movement patterns. The reticulospinal tract can initiate movement within a stable, routine situation, whereas the corticospinal tract is able to control tasks requiring more cognitive appraisal (e.g. varying surface, distractions and requiring close attention). [2]

If the excitatory fibres in the reticular formation have a leison this can result in hypotonia by the loss of descending excitatatory impulses to the spinal cord. Conversly in the inhibitory fibres are disrupted in the reticular formation this could result in hypertonia (spasticity) As the lateral reticulospinal's is involved in inhibition, if this pathway is disruped it can result in spasticity [7]. In addition due to the lack of descending inhibition, the medial reticulospinal tract  would then maintain spasticity in the musculature.[7]