Postural control is a term used to describe the way our central nervous system (CNS) regulates sensory information from other systems in order to produce adequate motor output to maintain a controlled, upright posture. The visual, vestibular, and somatosensory systems are the main sensory systems involved in postural control and balance[1][2].

Proper postural control is when an individual is able to engage in various static and dynamic activities, such as sitting, standing, kneeling, quadruped, crawling, walking, and running with the ability to contract the appropriate muscles required for a controlled midline posture, as well as the ability to make small adjustments in response to changes in position and movement, without the use of compensatory motions.

There are important reflexes involved in postural control known as the Cervicocollic Reflex (CCR), the Vestibulo-ocular reflex (VOR) and the Vestibulospinal Reflex (VSR) that work in conjuction with the vestibular nuclei and cerebellum, discussed in the last module (The vestibular system). The visual, vestibular and somatosensory are our three balance systems which are closely linked to control posture.

The visual system is the primary receiver of sensory information to maintain postural balance, and as such our postural stability increases with the improvement of the visual environment. 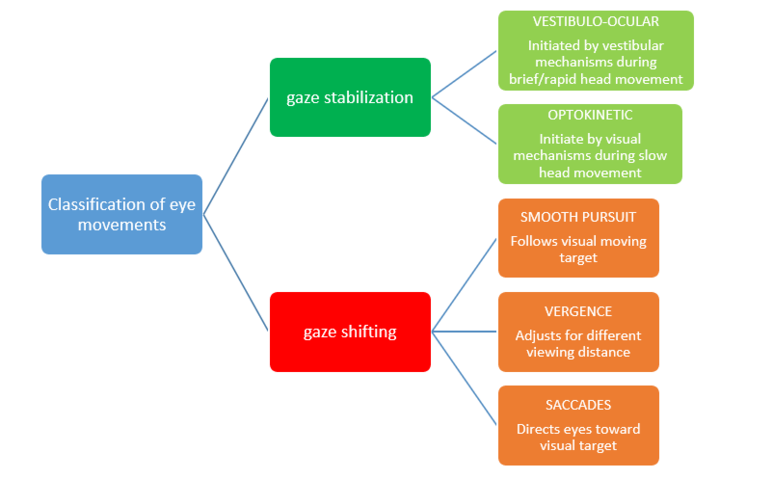 Two gaze stabilization systems operate during head movement, namely the vestibulo-ocular[6] and the optokinetic systems. For gaze stabilisation to be effective there are conjugate movements in which both eyes move in the same direction.

Three gaze shifting systems function to focus the image on the fovea.

The vestibular system orientates the trunk to vertical using sensory orientation and weighting appropriate sensory cues under different sensory environments, for example, the patient stands on an inclined surface, or on foam, or with their eyes closed. It also controls the body’s centre of mass (COM) both for static and dynamic positions via postural responses (patient stands or walks on a beam) and stabilises the head during postural movements vis-à-vis the patient leans or is tilted.

The somatosensory system is a complex system of sensory neurons and pathways that responds to changes at the surface or inside the body. It is also involved in maintaining postural balance by relaying information about body position to the brain, allowing it to activate the appropriate motor response or movement.

Mechanoreceptors are specific sensory receptors located in the muscle spindles. They provide the nervous system with information about the muscle’s length and velocity of contraction, thus contributing to the individual’s ability to discern joint movement and position sense[8]. The muscle spindles also provide afferent feedback that can be translated into appropriate reflexive and voluntary movements[9].

A very high amount of mechanoreceptors in muscle spindles are found in the suboccipital area, and are responsible for receiving and sending information to and from the CNS[10]. Mechanoreceptor impulses from the occiput to C3 (particulary upper cervical spine muscles) have direct access to vestibular nuclear complex (VNC) - a reflex centre that coordinates vision and neck movement.This same mechanoreceptor input also converges on the central cervical nucleus (CCN). The CCN is effectively a pathway to the cerebellum that integrates vestibular, ocular and proprioceptive information.The VNC also connects with the CCN, so there are interrelated pathways between all the systems. In a nutshell, mechanoreceptor input from the upper cervical region helps to coordinate vision, balance and movement of the neck[10] for effective postural control.

More sensorimotor dysfunction occurs with injury or whiplash associated disorders (WAD) to the upper cervical region than the lower cervical region because the upper region contains more muscle spindles, has a greater connection to the visual and vestibular systems, and more reflex activity[10][11].

For a more in depth analysis and understanding of the role of sensorimotor impairment in neck pain, please see Chris Worsfold’s course on Sensorimotor integration.

The vestibular system, somatosensory system and visual system do not act in isolation but are a complex postural control system that work together to achieve balance.

Postural stability happens with good sensorimotor integration between the upper cervical spine, visual and vestibular structures. Poor postural control occurs if there is a sensory mismatch, in other words the CNS is unable to distinguish between accurate and inaccurate sensory information from one or more of these systems, resulting in feelings of dizziness/unsteadiness/poor balance[10], and disruption in predictive timing of sensory input[12][13].

These patients often complain of headaches, dizziness, blurry vision, frontal headaches, eye strain and balance problems. These patients often have difficulty reading (horizontal deficits), they become headachey/dizzy when looking up at the board and down at the desk during note-taking (vertical deficits). These patients can also experience neck pain, as they may have an increase in muscle activity/stiffness as the body tries to compensate for a loss of balance[10]. They can even be symptomatic while running and trying to focus on a target such as a ball. Some patients complain of feeling disoriented/overwhelmed when driving in an unfamiliar city, driving in tunnels or pushing a trolley in the grocery aisles. 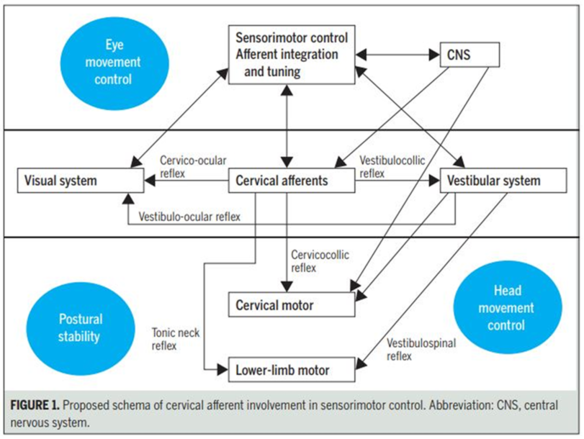 To learn more about the Postural System watch the lecture below.