The vestibular system is a sophisticated human postural control system[1]. It is sensitive to two types of information: the position of the head in space and sudden changes in the direction of movement of the head[2].

The vestibular system is divided into a central and peripheral system.

The vestibular system has both a sensory and motor component to help us sense and perceive motion and provides information about the movement of the head and its position with respect to gravity and other inertial forces (like those generated when driving in a car). This information is used to stabilise the eyes to our maintain gaze on targets of interest, with or without head movement.

The vestibular system also employs complicated strategies to maintain blood pressure when one quickly goes from supine to an erect posture. It helps us to maintain good head and body orientation in relation to our environment, most often in an upright posture allowing us to maximise sensory integration of our senses (see, hear, and smell).

The PVS is situated in the inner ear, behind the tympanic membrane. Inputs from the PVS are integrated by the central vestibular processor called the ‘vestibular nuclear complex’ which generates motor commands to drive the eyes and the body. The system is normally very accurate. To maintain accuracy, the vestibular system is monitored and calibrated by the cerebellum[3].

The Semi-circular canals (SCC’s) are specialised mechanoreceptors to help us access information regarding angular velocity[4]. The sensory input received from the SCC’s enables the Vestibular Ocular Reflex (VOR) to generate an eye movement that matches the velocity of the head movement.

The 3 SCC’s are positioned at right angles to each other to give us feedback in 3 different planes of movement. Remember there are 2 ears, so effectively six SCC’s.

Inside the canals there are hair cells in endolymph, and with head movement, the swishing of endolymph displaces these hair cells of the coplanar pair in opposite directions with respect to their ampullae, and neural firing increases in one vestibular nerve and decreases on the opposite side. Endolymph displacement is proportional to angular head velocity, so the semi-circular canals transmit a velocity signal to the brain. 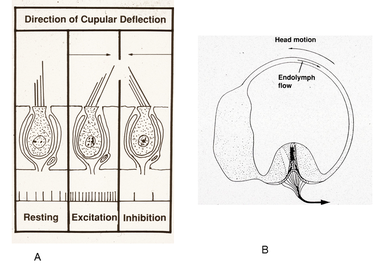 The Otoliths are made up of the Utricle (horizontal) and Saccule (vertical). Their job is to give us information about linear acceleration[6] by triggering an action potential to the brain to detect head position. Because earth’s gravitational field is a linear acceleration field, the otoliths register tilt[6]. For example, as the head is tilted laterally (which is also called roll), shear force is exerted upon the utricle, causing excitation, while shear force is lessened upon the saccule. Similar changes occur when the head is tilted forwards or backwards (called pitch).

Otoconia are little calcium carbonate crystals embedded in the otolithic membrane. Head tilt and linear head motion cause displacement of the otoconial complex, producing a shearing force that deflects the hair bundles and subsequently depolarizes the sensory hair cells. These electrical signals are then relayed to the central nervous system (CNS) by the afferent vestibular nerve, which jointly with other proprioceptive information, stimulate the CNS to initiate neuronal responses for maintaining body balance.

The correct formation and anchoring of otoconia is essential for optimal vestibular function and maintaining body balance[7][8]. Otoconia abnormalities are common and can cause vertigo and imbalance in humans[8].

Side Note: Benign Paroxysmal Positional Vertigo (BPPV) is thought to be caused by dislodging of calcium carbonate crystals (otoconia) from the otolithic membrane in the utricle which migrates into one of the semi-circular canals of the inner ear. This dislodgment physically displaces hair cells on movement and creates persistent action potentials until the response is fatigued, generally within 30 to 60 seconds.

Dizziness is a common symptom post concussion and the health professional needs to be able to differentiate dizziness from vertigo. Vertigo is most often characterised with nystagmus and dizziness particularly with positional changes of the head. 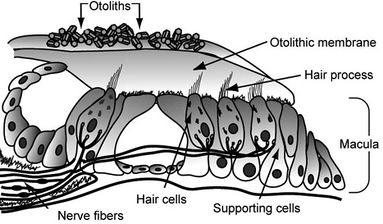 In summary, the hair cells of the canals and otoliths convert the mechanical energy generated by head motion into neural discharges directed to specific areas of the brainstem and the cerebellum. With their special orientation, the SCC’s and otolithic organs can respond selectively to head motion in particular directions. It is important to remember that the otoliths and semi-circular canals have different fluid mechanics: SCC’s measure angular velocity whereas the otoliths measure linear acceleration. 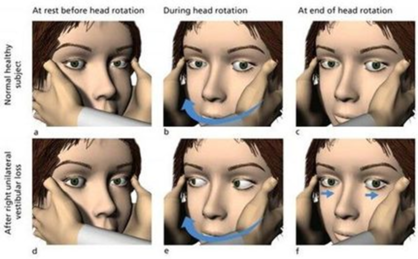 The VOR enables us to have gaze stability by maintaining stable vision during head motion[9]. The VOR has two components. The angular VOR, mediated by the SCC’s, compensates for rotation. The linear VOR, mediated by the otoliths, compensates for translation. The angular VOR is primarily responsible for gaze stabilization. The linear VOR is most important in situations where near targets are being viewed and the head is being moved at relatively high frequencies.

To have clear vision, the eyes must move in an equal and opposite direction during head motion. If the VOR is not firing, you will see a corrective saccade. In other words the eyes will move in the same direction as head movement before correcting and moving in the opposite direction.

The VSR stabilises the body. As an example of a vestibulospinal reflex, let us examine the sequence of events involved in generating a labyrinthine reflex. 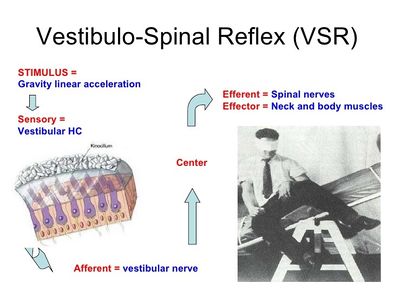 The output neurons of the VSR are the anterior horn cells of the spinal cord gray matter, which drive skeletal muscle. However, the connection between the vestibular nuclear complex and the motor neurons is more complicated than for the VOR.

The VSR has a much more difficult task than the VOR, because there are multiple strategies that can be used to prevent falls, which involve entirely different motor synergies. For example, when shoved from behind, one’s centre of gravity might become displaced anteriorly. In order to restore “balance,” one might (1) plantarflex at the ankles; (2) take a step; (3) grab for support; or (4) use some combination of all three activities.

The VSR also has to adjust limb motion appropriately for the position of the head on the body. The VSR must also use otolith input, reflecting linear motion, to a greater extent than the VOR.  The eyes can only rotate and thus can do little to compensate for linear motion, whilst the body can both rotate AND translate.

The VCR is a dynamic stabilizing system. This reflex maintains neck musculature in relation to head position[11].

The cervical spine has an important, and often under-recognized role as part of the vestibular system[11].

The function of the cervico-collic reflex is to stabilize the head on the body and, thereby, provide information about motion of the head with respect to the trunk. Afferent sensory changes caused by changes in neck position, create opposition to that stretch by reflexive contractions of neck muscles. The CCR is a compensatory response of the neck muscles that is driven by cervical proprioceptor inputs during motion of the body.

Cervico-ocular reflex is a feedback type reflex controlling eye movements modulated by neck proprioceptors, which can supplement the VOR.

Cervicospinal reflex refers to the changes in limb position driven by neck afferent activity. The reticulospinal system plays a role along with the vestibulospinal system in maintaining this.

The 8th cranial nerve is the Vestibulocochlear nerve, which divides to form the cochlear and vestibular nerve respectively. It contains sensory fibres for sound and equilibrium (balance), and transmits this information from the inner ear to the brain.

The vestibular nerve transmits afferent signals from the labyrinths through the internal auditory canal and enters the brainstem at the pontomedullary junction.

There are two main targets for vestibular input from primary afferents: the vestibular nuclear complex and the cerebellum. At both locations, vestibular sensory input is processed in association with somatosensory and visual sensory input. The cerebellum is considered one of three important brain areas contributing to coordination of movement in addition to the motor cortex and basal ganglia. The cerebellum monitors vestibular performance and readjusts central vestibular processing if necessary. The cerebellum receives afferent input from almost every sensory system, including the vestibular nuclear complex, consistent with its role as regulator of motor output[12].

So in simple terms we can say that the function of the cerebellum is related to neuronal circuitry. Through this circuitry and its input and output connections, it appears to act as a comparator, a system that compensates for errors by comparing intention with performance[2]. Signs and symptoms of cerebellar dysfunction include muscle weakness, hypotonia, nystagmus (dancing eyes), intention tremors and ataxia.

The human vestibular system is made up of 3 components: a peripheral sensory apparatus, a central processor and a mechanism for motor output. The peripheral apparatus (SCC’s and Otoliths) consist of a set of motion sensors that send information to the CNS (specifically the Vestibular nuclear complex and cerebellum) about head angular velocity and linear acceleration. The CNS processes these signals and combines them with other sensory information to estimate head and body orientation.

The output of the central vestibular system goes to the ocular muscles, skeletal muscles and spinal cord to serve various important reflexes, the vestibulo-ocular reflex (VOR),  vestibulocollic reflex (VCR), and the vestibulospinal reflex (VSR), cervico-ocular reflex (COR), cervicospinal reflex (CSR) and cervicocollic reflex (CCR). We can conclude that the vestibular system is a very sophisticated human control system; being able to see whilst your head is moving and being able to avoid falls is so important, even critical to survival.

Block diagram illustrating the organization of the vestibular system.

Figure 8: The organisation of the vestibular system