The Quadriceps femoris is the most voluminous muscle of the human body.[1]

The quadriceps femoris is a hip flexor and a knee extensor. It consists of four individual muscles; three vastus muscles and the rectus femoris. They form the main bulk of the thigh, and collectively are one of the most powerful muscles in the body.[2]

It is located in the anterior compartment of the thigh.

The four 4 sub-components being: 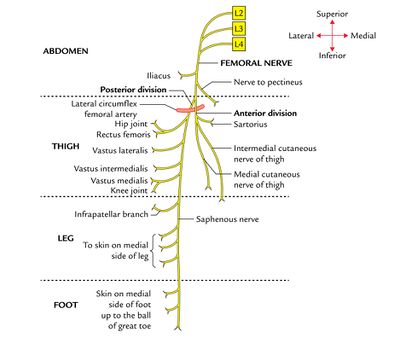 Innervation of these muscles is by the femoral nerve. (L2, L3, L4)

The quadriceps all work to extend (straighten) the knee. The rectus femoris also flexes the hip, The vastus medialis adducts the thigh and also extends and externally rotates the thigh and stabilizes the kneecap

From a sporting point of view, it is an extraordinarily important muscle, but due to the stress it receives, it is often subject to trauma. Injury to the quadriceps muscle group can be painful and debilitating. Strains, tears and contusions of the quadriceps are common in various sports, such as athletics, rugby, football, etc and result in lost time from training and competition.

The quadriceps is essential for daily activities, such as climbing stairs or getting up from the chair.

Myositis Ossificans(MO) is a complication associated with severe quadriceps contusions. This is a non-neoplastic proliferation of bone and cartilage in the area of the contusion injury. In contusions, the reported incidence is between 9% and 17%. Myositis Ossificans should be suspected if symptoms worsen after 2–3 weeks accompanied by a loss of knee flexion and persistent swelling.[3]

Skeletal muscle adapts in the presence of systemic diseases. This means that the function of the muscle changes both metabolism and volumes, worsening the symptomatic picture eg

The muscular adaptation of the quadriceps muscle with advancing age changes its morphology and function. The musculature loses mass and volume (sarcopenia) decreases strength and coordination. Motor units are lost (denervation processes), while the percentage of red fibers increases. This increases the fibrosis processes and intramuscular fat.

The presence of chronic and ingravescent respiratory diseases such as COPD determines a decrease in muscle mass of the quadriceps femoris muscle, an increase of the connective tissue, and fibrosis phenomena. This leads to decreased contractile capacity, less strength, and less balance during walking or standing posture. The anaerobic fibers increase at the expense of the oxidative fibers; the muscles fatiguing more easily. An increase in intramuscular fat, with local and systemic metabolic alteration (increased cardiovascular risk) also occur. The females suffer more from the functional alteration of the muscle than the males.

In multiple sclerosis, the quadriceps muscle loses muscle mass and strength, with a decrease in oxidative fibers but with an increase in anaerobic fibers. Although there is an increase in the number of white fibers, the latter suffer more atrophy. Increase intramuscular fat and fibrosis processes.[1]

After obtaining a thorough history, a careful examination should ensue including observation, palpation, strength testing, and evaluation of motion. Strain injuries of the quadriceps may present with an obvious deformity such as a bulge or defect in the muscle belly.[4]

The myoelectric balance of the quadriceps is essential for a correct movement of the patella.

The proprioceptive afferents of the muscle contribute to maintaining adequate posture. Recent studies show that the activation of these afferents allows the contralateral quadriceps muscle to improve its coordination, increasing postural balance. The quadriceps allow an independent walk, helps with stair climbing and enablssit to stand.

The strength expressed by the vastus lateralis increases with the increase in knee flexion. This mechanism is due to the length of the fibers compared to the connective structure of the muscle. Longer fibers express greater strength and make better use of the elasticity or resistance of the connective tissue. When the knee is extended, the vastus lateralis places a small force that is useful for maintaining the position with minimal effort.[1]