Charley horse/cork thigh/dead leg.
A quadriceps contusion is a traumatic blow, a deep bruise to the anterior lateral or medial aspect of the thigh. If examination confirms an area of swelling and tenderness with (terrible) pain on passive stretch and active contraction, the diagnosis is a Quadriceps contusion with resultant hematoma. [1] [2]
The contusion is the result of an external force that can damage the muscle but can’t eliminate its function completely. Quadriceps contusions can lead to two serious complications: Compartment Syndrome and myositis ossificans.[1] [3]

A contusion is the most common acute thigh injury in contact sport such as football, rugby and basketball. Contusions are caused by external forces like a direct blow from an opponent's knee. Thus, muscle contusions are classified as acute direct muscle injuries .The most frequently injured muscles are the exposed rectus femoris and the intermediate vastus, lying next to the bone, with limited space for movement when exposed to a direct blunt blow. [4] Localized bleeding may increase tissue pressure and tissue damage. The bleeding can be intramuscular or intermuscular. The intramuscular hematoma is more painful and restrictive of range of motion than the intermuscular hematoma. [5] [2] [1]

The Quadriceps femoris is a hip flexor and a knee extensor. It’s located in the anterior compartment of the thigh. This muscle is composed of 4 subcomponents:

Quadriceps contusions are mainly common by contact sports like rugby, football, basket, kick boxing [1]. A systematic review resulted in a frequency from 10% to 40% of all football injuries were categorized as contusion, strains or sprains.[6] The injury is caused by a sudden force to the quadriceps muscle causing significant muscle damage. This force is usual due to another player (in sports), a sport attribute or a misplaced fall on a severe object.

A massive blunt force mostly to the anterior or lateral thigh causes rupture to the muscle fibers. In the beginning there are negligible symptoms, but after 24 hours this will lead to hematoma formation within the muscle causing: pain, swelling, stifness and impairment of functional quadriceps excursion.[8] [5]

The injury consists of a well-defined sequence of events involving microscopic rupture and damage to muscle cells, macroscopic defects in muscle bellies, infiltrative bleeding, and inflammation. The repair of the tissue can be thought of as a race between remodeling and scar formation.[9]

Several physiological responses may occur after a deep thigh contusion including:

If there is major untreated and/or unresolved bleeding deep in the muscle tissue, a serious condition known as myositis ossificans can occur.

Contusion injury can lead to either diffuse or circumscribed bleeding that displaces or compresses muscle fibres causing pain and loss of motion. It happens that muscle fibres are torn off by the impact, but typically muscle fibres are not torn by longitudinal distraction. Therefore, contusions are not necessarily accompanied by a structural damage of muscle tissue. For this reason athletes, even with more severe contusions, can often continue playing for a long time, whereas even a smaller indirect structural injury forces the player often to stop at once.[4]

Next to muscle strains is traumatic muscle contusions the most frequent type of quadriceps injury in sports. A direct external forceful blow to the quadriceps causing significant muscle damage is the usual mechanism of this injury. In comparison to strains, contusions will cause rupture to the muscle fibers at or directly adjacent to the area of impact. This typically leads to hematoma formation within the muscle causing pain and loss of motion. The extent of pain and loss of movement will be dependent on the amount of fore and the impact of the force at the time of trauma. [1] [10] [11]Quadriceps contusions are graded mild, moderate or severe between 12 and 24 hours. A mild contusion has more than 90 degrees of knee flexion; moderate between 45 and 90 degrees of knee flexion and severe less than 45 grades of knee flexion. [6]
There are three grades in contusions: [10][12]

The diagnosis is made by questioning an accurate history from the patient and completing a physical examination.

The ‘Lower Extremity Functional Scale’ is used to evaluate the functionality for a wide range of lower limb conditions to know whether the person is having any difficulty with certain activities.

The best techniques for measuring the soft tissue damage and for complications caused by the initial injury are magnetic resonance imaging (MRI) and diagnostic ultrasound. Both have been highly sensitive to oedema and haemorrhage. These methods are expensive but can speed up the healing process by detecting the severity quick. [2] [8]Ultrasound can be used to identify a localized hematoma formation caused from a contusion and provide real-time imaging for needle aspiration. If there is concern for bony involvement, radiographs will evaluate for bony injury. Subsequently, radiographs are useful in identifying heterotopic bone formation, known as myositis ossificans (MO), which is a delayed complication of severe muscle contusions.

MRI provides excellent lesion detection and localisation. The images are anatomical and clearly understood by healthcare professionals and patients alike. Depending on the magnet used, even the largest of athletes can be imaged without difficulty. However, MRI is a scarce resource, expensive, time-consuming, uncomfortable and acquires static images. 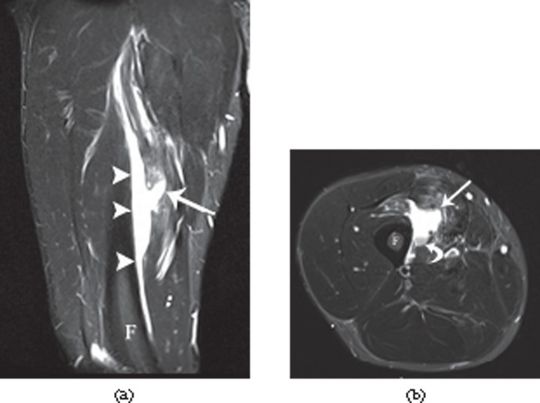 On ultrasound, a contusion is seen as an ill-defined area of hyperechogenicity within the muscle that crosses fascial boundaries . In the hyperacute situation, the injured muscle initially appears swollen and may be isoechoic with adjacent unaffected muscle.In the first 24–48 h, the haematoma will appear as an irregularly outlined muscle laceration separated by hypoechoic fluid with marked increased reflectivity in the surrounding muscle . During this period, the haematoma may solidify and become hyperechoic to the surrounding muscle. After 48–72 h, the haematoma develops into a clearly defined hypoechoic fluid collection with an echogenic margin. This echogenic margin gradually enlarges and “fills in” the haematoma in a centripetal fashion. If the haematoma is causing intense pain and/or exerts local mass effect on adjacent neurovascular structures, or is placing the limb at risk of compartment syndrome, then evacuation of the clot may be necessary. This is usually performed under ultrasound guidance 10–14 days after the initial injury , 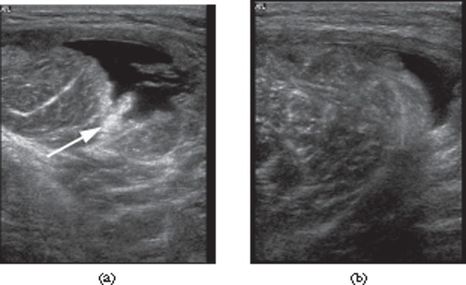 NSAIDs can be useful short term for decreasing pain, but their long-term effect on muscle healing is not known . Long-term use of NSAIDs for contusions is usually not necessary and is discouraged. However, NSAIDs have been promoted for prevention of myositis ossificans after severe quadriceps contusions. Evidence for this use is inferred from studies showing a decrease in heterotopic bone formation after total hip replacement in those patients given indomethacin for at least 7 days. Similar to quadriceps muscle strains, corticosteroids are not recommended in the treatment of contusion injuries.

After three to four weeks, if the patient still moves with pain and isn’t able to perform a painless, full range of motion, radiographic imaging should be performed. This is to detect whether myositis ossificans is present. Myositis ossificans results in lasting pain and limited knee flexion. Surgical excision is then recommended. An MRI should also be considered to check for the presence of intramuscular hematoma or seroma. An MRI can also determine osteomyelitis of the femur. In that case, the solution is a resection of the infected bone and antibiotics. [8] [5]

Criteria are similar to muscle strains for return to sports in contusions of the quadriceps. The athlete should be pain free, attain 120° of knee flexion with hip extended, and perform all aspects of functional field testing without limitations . Protective thigh padding is recommended prior to resuming sports in order to reduce recurrence.

Contusions are one of the most common muscle injuries besides muscle-strains. They can sometimes evolve to a more complicated injury such as myositis ossificans or compartment syndrome, to which you have to pay attention. The options for treatment are mostly physiotherapy and in some serious complications an operation will be needed. Physiotherapy is designed to reduce the pain and improve the ROM of the patients, by giving cryokinetics, soft tissue massage and electrotherapy.