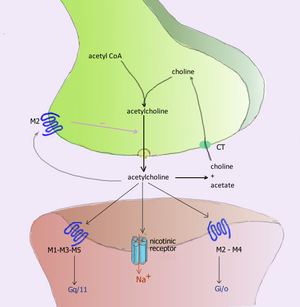 Acetylcholine (ACh), the first neurotransmitter discovered, is now known to be a neurotransmitter at the neuromuscular junction, all autonomic ganglia, at many autonomically innervated organs, and at many synapses in the CNS[1]. ACh is stored in vesicles at the ends of cholinergic (acetylcholine-producing) neurons.

While acetylcholine levels work for many functions, it is most commonly associated with memory, cognition, and sleep. It is deficient in the brains of those with late-stage Alzheimer disease.[2]

Human peripheral nervous systems require acetylcholine to excite the activation of muscle function properly. Systems work by using acetylcholine in smooth muscles, essential for muscle contraction. When something does block acetylcholine, it can lead to muscle weakness and even paralysis in some cases. 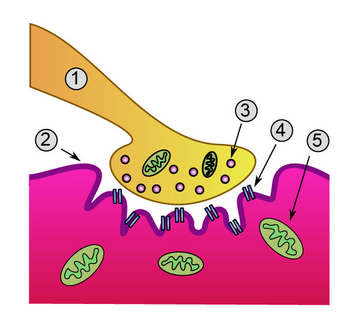 The activation of muscle function involves: a nerve impulse arriving at the terminal of a motor neuron; ACh is released into the neuromuscular junction; it combines with a receptor molecule in the postsynaptic membrane of a muscle fibre, changing the permeability of the membrane, causing channels to open that allow positively charged sodium ions to flow into the muscle cell; if successive nerve impulses accumulate at a sufficiently high frequency, sodium channels along the end-plate membrane become fully activated, resulting in muscle cell contraction.[2]

ACh is the chief neurotransmitter of the parasympathetic nervous system, the part of the autonomic nervous system, that contracts smooth muscles, dilates blood vessels, increases bodily secretions, and slows heart rate. ACh can stimulate a response or block a response and thus can have excitatory or inhibitory effects[2]. 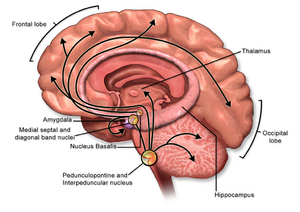 In the central nervous system, ACh is found primarily in interneurons. A few important long-axon cholinergic pathways have also been identified. eg: the cholinergic projection from the nucleus basalis of Meynert (in the basal forebrain) to the forebrain neocortex and associated limbic structures (degeneration of this pathway is one of the pathologies associated with Alzheimer's disease)[1]. 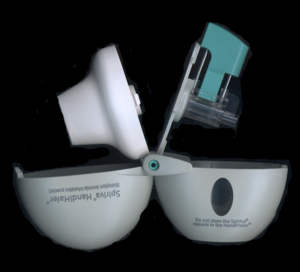 Anticholinergic agents are substances that blocks the neurotransmitter acetylcholine in the central and the peripheral nervous system. They inhibits parasympathetic nerve impulses by selectively blocking the binding of the neurotransmitter acetylcholine to its receptor in nerve cells. As anticholinergics can affect a variety of functions, including digestion, urination, salivation, and movement, they can help treat many conditions.