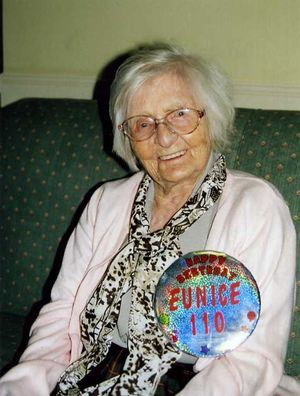 Most people will live to experience aging. Age-related deterioration is affecting an ever-growing number of people. Although the process is unavoidable, it is important to understand the process. As a physiotherapist, we might be able to positively influence aspects that maintain or engender better health and wellness as a person ages, treating and ameliorating symptoms of common conditions associated with aging.

In the past, maximum life span (the maximum biological limit of life in an ideal environment) was not thought to be subject to change with the process of aging considered non-adaptive, and subject to genetic traits. In the early 1900s, a series of flawed experiments by researcher Alexis Carrel demonstrated that in an optimal environment, cells of higher organisms (chickens) were able to divide continually, leading people to believe our cells to potentially possess immortal properties. In the 1960’s Leonard Hayflick[1] disproved this theory by identifying a maximal number of divisions a human cell could undergo in culture (known as the Hayflick limit), which set our maximal life span at around 115 years. Life span is the key to the intrinsic biological causes of aging, as these factors ensure an individual’s survival to a certain point until biological aging eventually causes death.

There are many theories about the mechanisms of age-related changes, and they are mutually exclusive, no one theory is sufficiently able to explain the process of aging, and they often contradict one another. A literature review[2] highlights that centenarians have healthy ageing because of the delay in processes like physiological decline and age-related diseases or syndromes. The review discusses that genetic component which plays an important role in longevity. The researchers suggest that biology of centenarians yields a key for intervention to promote healthy ageing in the general population.


Modern biological theories of aging in humans currently fall into two main categories: programmed and damage or error theories.
The programmed theories imply that aging follows a biological timetable (regulated by changes in gene expression that affect the systems responsible for maintenance, repair and defense responses), and the damage or error theories emphasize environmental assaults to living organisms that induce cumulative damage at various levels as the cause of aging[3].

These two categories of theory[4] are also referred to as non-programmed aging theories based on evolutionary concepts (where ageing is considered the result of an organism’s inability to better combat natural deteriorative processes), and programmed ageing theories (which consider ageing to ultimately be the result of a biological mechanism or programme that purposely causes or allows deterioration and death in order to obtain a direct evolutionary benefit achieved by limiting lifespan beyond a species-specific optimum lifespan (Figure 1). 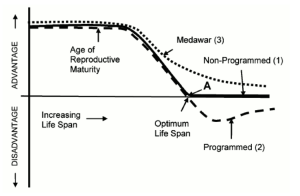 Curve 1: Modern non-programmed aging theories – The evolutionary value of further life and reproduction is effectively zero beyond some species-specific age.

Curve 2: Modern programmed aging theories – There is an evolutionary cost associated with surviving beyond a species-specific age.

Goldsmith's review of modern programmed (adaptive) theories of biological ageing investigates how organisms have evolved mechanisms that purposely limit their lifespans in order to obtain an evolutionary benefit.

This video gives a good introduction to the theories of aging

1) Programmed Longevity, which considers ageing to be the result of a sequential switching on and off of certain genes, with senescence being defined as the time when age-associated deficits are manifested.
2) Endocrine Theory, where biological clocks act through hormones to control the pace of ageing.
3) Immunological Theory, which states that the immune system is programmed to decline over time, leading to an increased vulnerability to infectious disease and thus ageing and death.

1) Wear and tear theory, where vital parts in our cells and tissues wear out resulting in ageing.
2) Rate of living theory, that supports the theory that the greater an organism's rate of oxygen basal, metabolism, the shorter its life span
3) Cross-linking theory, according to which an accumulation of cross-linked proteins damages cells and tissues, slowing down bodily processes and thus result in ageing.
4) Free radicals theory, which proposes that superoxide and other free radicals cause damage to the macromolecular components of the cell, giving rise to accumulated damage causing cells, and eventually organs, to stop functioning.

Trindade et al[6] provide a different viewpoint again, stating that to understand the evolution of ageing, we have to understand the environment-dependent balance between the advantages and disadvantages of extended lifespan in the process of spreading genes. These researchers have developed a fitness-based framework in which they categorise existing theories into four basic types: secondary (beneficial), maladaptive (neutral), assisted death (detrimental), and senemorphic aging (varying between beneficial to detrimental).

Some of the more commonly discussed theories and their relation to ageing are summarised below:

In addition to these explanations, you can see several presentations about the biological theories of ageing on YouTube:

The Wear and Tear Theory:

A Big Think monologue by Michio Kaku looking at what enzymes like Telomerase and Resveratrol offer: