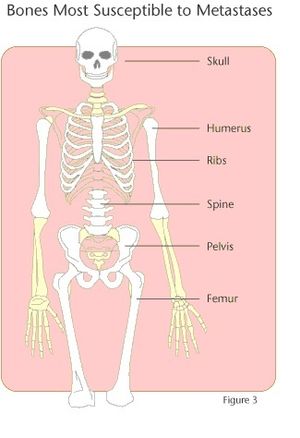 Skeletal metastases (a cancer of the bone that has originated from another site) are common and result in significant morbidity in patients with metastatic disease.[1]

There are two types of bone cells, osteoblast and osteoclast. Osteoblast is the forming of new bone, the tumor signals to the bone to overproduce bone cells. Osteoclast is what dissolves the bone, leaving weakened bones. With osteoclast, you develop osteolytic lesions which are when the bone breaks down. This allows excess calcium to be released into the bloodstream. Osteoblastic or osteolytic changes will be seen in most cancers, sometimes both are seen.[5][6][7][4]

This 3-minute computer-animated video explains the process of cancer spreading to bone and how the cancer affects the bone once it has implanted. 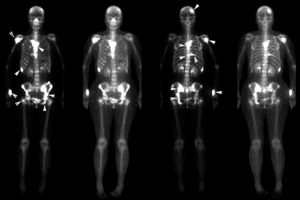 Skeletal metastases account for 70% of all malignant bone tumours, and are seen in a vast number of primary cancers

The majority of metastases to bone are asymptomatic. Symptoms can arise in a number of scenarios

4. Hypercalcemia - Some bone metastases can cause the release of calcium from the bones into the bloodstream. This can lead to hypercalcemia which can cause constipation, nausea, loss of appetite, extreme thirst, frequent urination, dehydration, fatigue, and in very serious cases confusion and even coma.[10]

In most cases the diagnosis of metastatic disease is already known.

The major route of spread of tumour to bone is haematogenous, although lymphatic spread is also seen

Regardless of the route of spread, metastases lead to:

If a person has cancer, lab tests and imaging tests may be done to see if the cancer has spread to other sites. This is how skeletal metastases are discovered in their early stages.

Skeletal metastases invariably incite a mixture of bone resorption and bone formation and can thus take on one of three patterns, depending on the dominant process:

Bone scans are the most sensitive routine imaging modality to try and identify both sclerotic and lytic lesions. Often demonstrate increased uptake (hot spot) although occasionally (in very aggressive purely lytic lesions) a photopenic defect (cold spot) may be visible. A superscan is also a possible pattern where extensive diffuse metastatic disease results in uniform increase in uptake.

Treatment is aimed first at maintaining or improving QOL and then at disease control and possible cure.

The treatments offered for skeletal metastases are influenced by many factors including:

The following are potential treatment options for skeletal metastases:

Skeletal metastases remain one of the more debilitating problems for cancer patients. Research is ongoing to identify the molecular mechanisms that result in both osteolytic and osteoblastic bone lesions.

No single statement can be made with regards to the prognosis of patients with skeletal metastases as this will vary greatly depending on the primary tumour[2].

Physical therapy intervention focuses on optimizing the functional capacity of patients, keeping patients from becoming bed-bound, preventing pathological fracture, and helping them to maintain as much independence as possible. Thus, therapy takes on more of a maintenance or palliative role with these individuals. There is a great risk involved with working with skeletal metastasis, with the primary risk being additional fractures. Patients should be informed of this risk and that the alternative treatment of bed rest can have devastating side effects as well.

Manual muscle testing, passive or active-assisted range of motion are not evaluated on an extremity with a bony lesion due to the risk of fracture. Only active movement is assessed, and this is likely to be limited by pain. Likewise, resistive exercise involving an affected area is generally contraindicated. Treatment sessions, when appropriate, should focus on training the patient to use residual function or to develop compensatory techniques, assistive device training, and educating both the patient and family members.

In summary, effective rehabilitation can help prevent a patient with skeletal metastases from becoming unnecessarily or prematurely bed-bound and/or dependent in activities of daily living. While achievements may be limited, they can be invaluable in helping the patient maintain some control over his or her life.