The density of these glands on non-glabrous skin, like the face, trunk, and limbs, are ~2-5x less than on glabrous skin. These are more variably distributed, and mainly function with temperature regulation. [1] 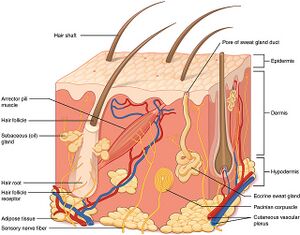 Despite this, having a greater density of sweat glands does not indicate that the person would sweat more. The differences between sweating rate throughout the body, or different areas of the body, would be due to the sweat secretion rate per gland, compared to the total number of active sweat glands. The contents of eccrine sweat are mainly water and NaCl. It also contains chemicals from interstitial fluid and the eccrine gland. [1]

Eccrine sweat glands can also be thought of as an excretory organ, since they excrete waste products as well. [1]

Apocrine sweat glands are present in the: axilla, breasts, face, scalp, and perineum. [1]

Similar to the eccrine glands, they are present from birth/childhood, but unlike the eccrine glands they do not start secreting until puberty. Apocrine glands produce viscous, lipid-rich sweat, which consists of proteins, and ammonia. This gland can be known as the scent gland, which is involved in producing pheromones, having an important social and sexual function in humans. [1]

They are similar to eccrine glands, as the distal duct connects to and empties sweat onto the surface of the skin, and they produce a large amount of salt water secretions. [1]

Here is a video explaining sweat glands, with some additional information: [2]

Although sweat is mainly water and NaCl, there are many other minerals and constituents as a part of its composition. These include: [1]

This comes from blood plasma, therefore has a similar concentration. Urea also plays a role as a natural skin moisturizer, in eccrine sweat, and functions to excrete metabolic waste.

This also mainly comes from blood plasma. Ethanol has a role of detoxification in eccrine sweat.

There is less concentration of bicarbonate than blood plasma. With HCO3 being reabsorbed in the sweat duct, there is acidification of the sweat output. HCO3 is inversely proportional to sweat rate. Therefore, sweat pH is lower at lower sweat rates. HCO3 is responsible for controlling the pH of eccrine sweat.

This is the main energy source for eccrine sweat gland secretions. 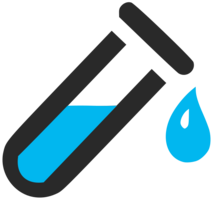 Concentrations are generally higher than plasma, but its secretion is very minute. Its main function is detoxification.

Other minor constituents include: [1]

For more information on sweat contents, see these resources: Characterization of sweat induced with pilocarpine, physical exercise, and collected passively by metabolomic analysis, Metabolomics analysis of human sweat collected after moderate exercise, and The proteomic and metabolomic characterization of exercise induced sweat for human performance monitoring: A pilot investigation.

Here is a brief video describing the contents of sweat, how to maintain these components, and the benefits of sweating: [3]

There is a direct correlation between sweat rate, and total sweat output from the body, and contributors to sweat composition. Whole body sweating rate is derived by the product of the density of active sweat glands and the secretion rate per gland. When someone starts sweating, the primary response is a rapid increase of sweat gland recruitment, and then a progressive increase of sweat secretion per gland. [1]

Some important aspects of thermoregulatory sweating include: [1]

of the sweat response to hyperthermia.

Shifts in sweating temperature onset are central (hypothalamic), and changes in sensitivity are peripheral, at the level of the sweat gland. [1]

The Na+ and Cl- concentrations of the sweat output are determined by the rate of Na+ reabsorption in relation to Na+ secretion in the clear cells. [1]

Plasma aldosterone concentration, and/or sweat gland sensitivity to aldosterone, effects the Na-K-ATPase activity, which effects Na+ reabsorption. Resting plasma aldosterone is controlled by an individual’s long term physiological condition, which factors in heat acclimation, fitness, and diet. This also changes according to exercise and dehydration. [1]

Contrarily, there are two parameters, central threshold temperature, and sensitivity, which have a major effect on determining sweat rate. These parameters help outline the effect of nonthermal factors on sweating. [4]

The reabsorption of bicarbonate, by the sweat gland, for the acid-base balance of blood, is also an important factor. Before the sweat is released onto the skin surface, the fluid in the ductal lumen gains acidity, due to possible secretion of hydrogen ions into the sweat duct. [1]

Bicarbonate reabsorption is inversely related to sweat rate. Thus, at low sweat rates, the luminal fluid is exposed to the duct for a long time, and is further acidified, which results in a pH of about 4-5. However, at quicker flow rates, pH can remain as high as 6.9. [1]

The structure of sweat glands can play a role in the likelihood and amount of sweating. When the sweat glands are frequently activated, with regular exercise, there is acclimation of the sweat glands in their size and neural/hormonal response. Sweat glands, between individuals, can be of varying sizes, up to five time bigger in some individuals, than others. It is seen that the size of individual sweat glands, their response to methacholine, and secretory rate, are all directly related. Aerobic training and heat acclimation are contributors to an increase in sweat gland size and cholinergic responsiveness. [1]

The secretion of sweat follows a Na-K-2Cl cotransport model: [1]

Central and skin thermoreceptors sense an increase in body temperature. This information is registered by the preoptic area of the hypothalamus, to trigger the sudomotor response. Thermoreceptors in the abdominal region and surrounding muscles are also involved with controlling sweating. Thermal sweating is controlled by sympathetic cholinergic receptors. [1]

Sweat production is facilitated by the release of acetylcholine from non-myelinated sympathetic class C postganglionic nerve fibers, binding onto the muscarinic receptors on the sweat gland. Secretion of sweat can also occur due to adrenergic receptors, but this is not as dominant as cholinergic receptors. [1]

Eccrine sweat glands can also respond to exercise stimuli of a non-thermal nature which may be controlled by a feed-forward mechanism. [1]

The following chart helps outline modifiers of the control of eccrine sweating: [1] 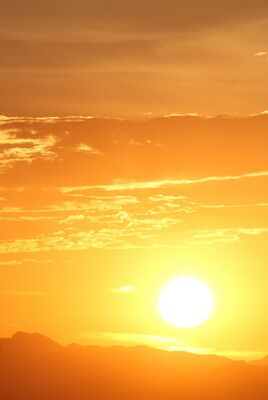 In addition to the methods to secrete sweat from the eccrine glands, there may be further constituents/contaminants in the sweat and/or on the skin. This can include remaining contents of the sweat duct, secretion of sebum, epidermal cells, and/or skin surface contaminants. It is seen that there can be NaCl content on the skin with or without sweating, however contents on the skin with sweating may be unnoticeable. [1]

It is seen that autonomic responses can differ between sweating from: [1]

There are three factors that control the evaporation of sweat from the skin: [5]

The high relative humidity reduces the relative pressure gradient between someone's skin and the environment. With extreme high humidity the vapour pressure in the air is similar to the vapour pressure on moist skin, thus the rate of evaporation is decreased. Sweating in a hot and humid environment results in unnecessary water loss, increased body heat, and higher sweat rate. Sweating itself doesn't cool the skin, but it is the evaporation that actually cools the skin. [5]

When it comes to hidromeiosis, the minimization of sweat secretion rate when the skin is already wet, it was noted that when there is water on the skin, either from sweating or immersion, sweat secretion is halted. In any activity or thermal sweating, it is noted that a threshold rate of sweating must be reached for hidromeiosis to begin. Hidromeiosis does not seem to be an adaptive process, since as sweating begins to cease, the temperature in certain areas of the body may begin to rise. It is seen, too, that dehydration may increase hidromeiosis. In addition, the exposure to thermal heat stress may be more of a factor for hidromeiosis, compared to the stress from physical activity. Hidromeiosis usually commences after 1-2 hours of intense physical activity, and as such there is a threshold sweat rate, at which hidromeiosis ceases. [6]

Hidromeiosis is seen to only affect sweat rate after the skin becomes fully wet. Also, the rate at which sweat rate decreases is directly related to the sweat rate when hidromeisos begins. It is important to note that heat adaptation (in the summer) or adaptation to the cold (in the winter) affects the threshold of when hidromeiosis starts. In general, it is possible that hidromeiosis may be the cause of the cessation of sweating in humid environments, as opposed to dry environments. [6]

For an extension on the topic of sweat, check out the following pages:

Here is a quick, very informative TedEd video on sweat, and its various components: [7]