Manipulation of the Cervical Spine

The cervical spine is often a cause or a contributing cause for pain in the upper limb, in the head or in the dorsal region of the back. It is important to analyse the effectiveness and the efficiency of the manipulation techniques for manage pain. The safety and the contraindications of manipulation of the cervical spine were deeply analysed in the last decades, in order to proof the High Velocity Low Amplitude Thrust (HVLAT) as a technique to provide pain relief.

The cervical spine consists of seven distinct vertebrae, two of which are given unique names:

There are two different joints present throughout the vertebral column: The disc joint (determines how much vertebral motion is possible at a particular segmental level), and the facet joints (determine the type of motion)

The HVLAT of the cervical spine it is a technique, not a treatment. The clinical diagnosis, the functional and segmental restriction of range of movement and the anamnesis represent the usual care of the evaluation. By performing a thorough examination and using clinical reasoning, clinicians may be able to prevent the majority of adverse events and improving patient safety.With uncertainty regarding screening tools,[1] [2]clinicians must use additional strategies (e.g. red flags) for decision-making when choosing to use an HVLAT[3] However it is demonstrated that mobilization and/or manipulation when used with exercise are beneficial for persistent mechanical neck disorders with or without headache. Done alone, manipulation and/or mobilization were not beneficial; when compared to one another, neither was superior. [4]

The kinematic of HVLAT of cervical spine is still controversial. The hypotesis is to create a torque to separate the articular surface of joints.[5] There are different type of HVLA techniques that combine oblique pulling manipulation or the cervical rotation–traction torque[6]. When the type of manipulation involved exclusive rotational thrust it is find the largest representation of adverse events[7]

The ability to perform a successful adjustment with HVLA therapy will, at times, elicit a "popping" sound. The restrictive barrier should be engaged entirely before applying the thrust. Finally, after executing the HVLA technique, the practitioner should reassess the range of motion and the somatic dysfunction treated. A successful result would lead to approximately 70% or greater return in the restricted range of motion and/or relief of pain. [12]

HVLAT of the Cervical Spine [13]

So far, the exact mechanism through which spinal manipulation works has not been established. Experimental studies conducted on both animal and human subjects have indicated that the mechanical stimulation of manipulation produces a barrage of input into the dorsal horn of the spinal cord, which initiates a cascade of neural responses involving complex interactions between the peripheral nervous system and manipulation. [16][17] Research propose different assumption to describe the effects.

One mechanism underlying the effects of spinal manipulation may, therefore, be the manipulation's ability to alter central sensory processing by removing subthreshold mechanical or chemical stimuli from paraspinal tissues. Spinal manipulation is also thought to affect reflex neural outputs to both muscle and visceral organs. Substantial evidence demonstrates that spinal manipulation evokes paraspinal muscle reflexes and alters motoneuron excitability.[18]Another effect could be the effective secondary stimulation of the dorsal periaqueductal gray (dPAG), only suggested by Wright [19]. In addition it was suggested[20] also a lessening of temporal summation in the dorsal horn cells secondary a HVLAT on the lumbar and thoracic spine. [21] 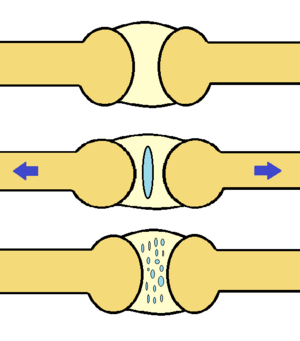 Example of cavitation in a MCP joint[29]

Cavitation sounds (‘cracks’, ‘clicks’ or ‘pops’) associated with spinal thrust manipulation are commonly observed in clinic. The audible release is caused by a cavitation process whereby a sudden decrease in intracapsular pressure causes dissolved gasses in the synovial fluid to be released into the joint cavity. Once a joint undergoes cavitation, the force-displacement curve changes and the range of motion of the joint increases. [30] It is seen in patients with healthy joints as well as those with somatic dysfunction. After an articular release, there is a difference in joint spacing-with the release increasing the distance between articular surfaces.[31]

Although bubble collapse, or the cavitation model[32] has been widely accepted for the past four decades as the mechanism of “joint cracking”, a more recent study by Kawchuk et al[33] reported a “dark intra-articular void” during MCP distraction. Notably, this “dark intra-articular void” was associated with concurrent sound production; that is, the “joint cracking” was associated in time with cavity formation (rather than cavity collapse) within the synovial fluid, and with an average of 1.89 mm of joint surface separation. Kawchuk et al referred to this process as tribonucleation; that is, when sufficient distractive force overcomes the viscous attraction or adhesive forces between opposing joint surfaces, rapid separation of the articulation occurs with a resulting drop in synovial pressure, allowing dissolved gas to come out of solution to form a bubble, cavity, clear space or void within the joint.

It remain still controversial another fenomena related to the "popping" sound that collide against previous theories. Infact after a joint manipulation had take place, there is a refractory period in which no other "popping"sound could been evocate.[34] This 15-30 minutes refractory period is believed to be due to the presence of micro-bubbles of gas in the synovial fluid.[35]However those studies analysed the cavitation in the phalangeal metacarpal joint searching for the increase in joint spase and the decrease in joint density. Despite of this there are no evidence of gas in the joint space or increase in zygapophyseal space after HVLAT of the cervical spine joints[34].

In light of this, there are not consistent with the understanding of cavitation in joints, in particular the refractory period and in the cervical spine.The traditional expectation of a single pop or cavitation sound emanating from the target or dysfunctional facet joint during HVLA thrust manipulation is not consistent with the existing literature for the upper cervical, lower cervical, thoracic or lumbar regions. Moreover, the evidence suggests that HVLA thrust manipulation directed at the spine creates multiple cavitation sounds.[37]

Nevertheless, the question of whether these multiple cavitation sounds emanate from the same joint, adjacent ipsilateral or contralateral joints, or even extra-articular soft-tissues remains to be elucidated[40]

Despite of that practitioner observed that for HVLA thrusts with a primary leverage of rotation the resulting cavitation was most likely to occur on the contralateral side to the applicator. For side bending thrusts, the resulting cavitation was no more likely to occur on the contralateral or ipsilateral sides.[41] 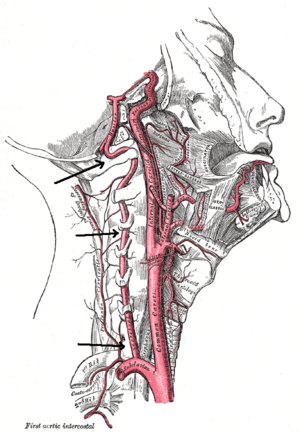 In the last decades clinicians were asking if there are some relations between the Cervical Arterial Dysfunction (CAD) and Cervical Spine Manipulation. However it is not actually demonstrate that the manipulation can cause a CAD. Otherwise it is possible that a patient can actually be visited during an acute dissecation of the vertebrobasilar arterial system (VBA)[47]. It represent a relative contraindication if there is a previous diagnosis of VBA insufficiency[12]

There are no practice guidelines where the HVLAT are raccomanded. [55] Nevertheless the difficult to find licterature or studies with a high level of raccomandation it does not mean that HVLAT of the cervical spine it is ineffective. However the evaluation of the signs and symptoms of the patient must guide the clinicians to choose when manipulate the cervical spine could be an option to have the best outcome. [23] In fact the primary use of cervical manipulation is not raccomanded as first option. It is demonstrated that cervical spine mobilisations and strenght and mobility exercise have the best outcome. Eventually both therapies can be associated with thoracic spine manipulations.

The clinicians could use the HVLAT of cervical spine in the following pathologies: