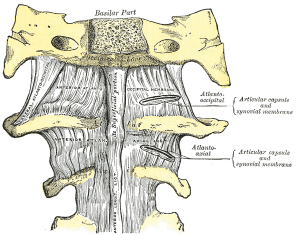 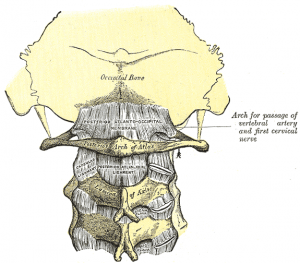 The atlanto-axial joint is a joint between the first and second cervical vertebrae; the Atlas and Axis.  It is a complex joint made up of three synovial joints and constitutes the most mobile articulation of the spine[1].  The middle (or median) joint is classified as a pivot joint and the lateral joints are plane articulations.

There are two lateral atlanto-axial joints which are concave in an anterior-posterior direction, this allows rotation.

The median atlantoaxial joint is the articulation of the: .

Between the articular processes of the two bones there is on either side an arthrodial or gliding joint.

The atlantoaxial articular capsules are thick and loose, and connect the margins of the lateral masses of the atlas with those of the posterior articular surfaces of the axis.

Each is strengthened at its posterior and medial part by an accessory ligament, which is attached below to the body of the axis near the base of the odontoid process, and above to the lateral mass of the atlas near the transverse ligament.

The ligaments connecting these bones are:

Rotation is the primary movement at this joint - 60% of cervical rotation (50°) comes from the atlanto-axial articulation.  This is allowed by the pivot articulation between the odontoid process of the axis and the ring formed by the anterior arch and the transverse ligament of the atlas.


Flexion (10°) and Extension is limited by tectoral membrane.

Side flexion is around 5°.

Because of its proximity to the brain stem and importance in stabilization, fracture or injury at this level can be catastrophic. Common trauma and pathologies include (but are not limited to):