Transverse Ligament of the Atlas 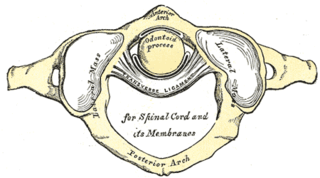 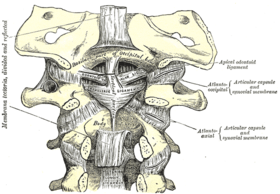 The transverse ligament of the atlas (TLA) is a thick, strong band of approximately 20mm in length[1] which arches across the ring of the atlas and maintains the odontoid process in contact with the anterior arch. It is concave in front, convex behind and broader at the middle than at the ends. The anterior surface of the ligament is covered with articular cartilage to allow articulation with the Odontoid process.

It is attached on either side to a small tubercle on the medial surface of the lateral mass of the Atlas.

As it crosses the odontoid process, a small fasciculus (crus superius) is prolonged upward and another (crus inferius) downward, from the superficial or posterior fibers of the ligament. The former is attached to the basilar section of the occipital bone, in close relation with the Tectorial membrane. The latter is fixed to the posterior surface of the body of the Axis; hence, the whole ligament is named the cruciform ligament of the atlas.

It is a very strong, primary stabiliser for the upper cervical spine - the odontoid process will generally fracture before the ligament will tear.

It divides the ring of the Atlas into two unequal parts: of these, the posterior and larger serves for the transmission of the spinal cord, its membranes, and the accessory nerves; the anterior and smaller contains the Odontoid process.

It functions to prevent anterior displacement of the C1 (atlas) over C2 (axis), the main stabilizer for the odontoid process preventing it from posterior migration.

Type 1, there is a pure ligament tear and will need surgical fixation.

Type 2, called avulsion rupture, the rupture is from the lateral side of the atlas and needs a halo vest for a period of immobilization to heal.