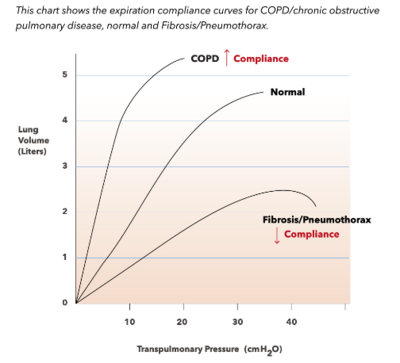 Pulmonary compliance, a measure of the lung expandability, is important in ideal respiratory system function. It refers to the ability of the lungs to stretch and expand. Lung compliance can be calculated by dividing volume by pressure. 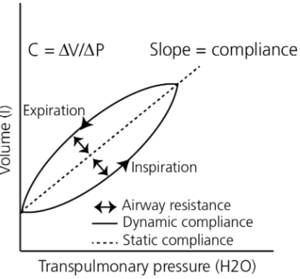 Compliance of the respiratory system describes the expandability of the lungs and chest wall. There are two types of compliance: dynamic and static.

For example, If a person was to fill the lung with pressure and then not move it, the pressure would eventually decrease; this is the static compliance measurement. Dynamic compliance is measured by dividing the tidal volume, the average volume of air in one breath cycle, by the difference between the pressure of the lungs at full inspiration and full expiration. Static compliance is always a higher value than dynamic[4].

Pressure-volume curves are common schemes to express the relationship of dynamic and static compliance where the slope is compliance.[5] 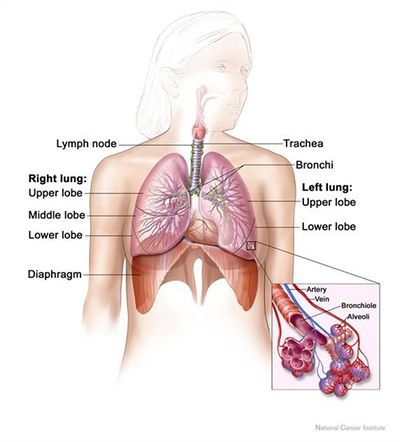 The combined force of surface tension throughout the lung's alveoli serves as a powerful contributor to the elastic recoil of the lung.

Increased lung volumes would require expansion of individual alveoli which is highly resisted by the surface tension of the alveolar fluid inner lining. In fact, the recoiling force of alveolar surface tension is so powerful that special surfactant chemicals must be synthesized and secreted into the inner lining fluid to reduce the surface tension. Failure to produce these surfactants is an important contributor to major pulmonary pathologies; eg Neonatal Respiratory Distress Syndrome.[3] 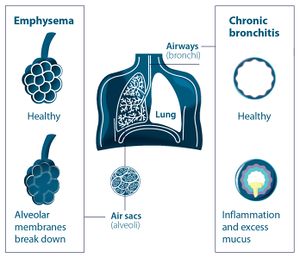 Lung compliance changes can indicate when there are issues with the lungs.