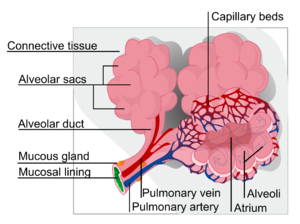 Respiratory bronchioles lead into alveolar ducts which are deeply lined with alveoli. Each respiratory bronchiole gives rise to between two and eleven alveolar ducts. Each duct opens into five or six alveolar sacs into which clusters of alveoli open. The number of alveoli in the human lung increased exponentially during the first 2 yr of life but continued to increase albeit at a reduced rate through adolescence.[2]

The alveolar membrane is the gas exchange surface, surrounded by a network of capillaries[3]. 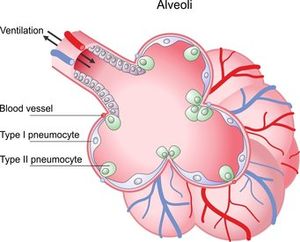 Alveolar cells have several different types according to function. Two major types are pneumocytes (Type I cells) or pneumonocytes (Type II cells). They are found in the alveolar wall and a large phagocytic cell known as an alveolar macrophage[5] that moves about in the lumens of the alveoli, and in the connective tissue between them.

They are thin, squamous, and flat epithelial lining cells that form the structure of the alveoli.[6] They have long cytoplasmic extensions that cover beyond 95% of the alveolar surface.[4] The thin lining enables a fast diffusion of gas exchange between the air in the alveoli and the blood in the surrounding capillaries. The nucleus of the cell occupies a large area of free cytoplasm and its organelles are clustered around it reducing the thickness of the cell. This helps keeps the thickness of the blood-air barrier reduced to a minimum. The relatively low solubility of oxygen necessitates the large internal surface area and very thin walls of the alveoli.

The cytoplasm in the thin portion contains pinocytotic vesicles which may play a role in the removal of small particulate contaminants from the outer surface. In addition to desmosomes, all type I alveolar cells have occluding junctions that prevent the leakage of tissue fluid into the alveolar air space. To permit expansion and contraction of the walls during breathing, type I cells have a mesh-like fabric of elastic and collagenous fibers. the fibers allow for firmness and elasticity.

Type I pneumocytes are unable to replicate and are susceptible to toxic insults. These are the larger of the two cell types. In the event of damage, type II cells can proliferate and differentiate into type I cells to compensate.

These are cuboidal and much smaller and numerous than type I cells.[6]  Type II cells in the alveolar wall contain secretory organelles known as lamellar bodies that fuse with the cell membranes and secrete pulmonary surfactant. This surfactant is a film of fatty substances that reduce alveolar surface tension. Continously released by exocytosis,the coating prevents the alveoli from collapse. The fluid coating is produced by the body in order to facilitate the transfer of gases between blood and alveolar air, and the type II cells are typically found at the blood-air barrier.[7]

The alveolar macrophages (dust cells) reside on the internal lumenal surfaces of the alveoli, the alveolar ducts, and the bronchioles. They are mobile scavengers that serve to engulf foreign particles in the lungs, such as dust, bacteria, carbon particles, and blood cells from injuries.[5]

Visual inspection can be used to appreciate the level of distress, use of accessory muscles, respiratory position, chest structure, respiratory pattern, and other clues outside of the chest.[8]

The pulmonary examination consists of inspection, palpation, percussion, and auscultation. The inspection process initiates and continues throughout the patient encounter. Palpation, confirmed by percussion, assesses for tenderness and degree of chest expansion. Auscultation, a more sensitive process, confirms earlier findings and may help to identify specific pathologic processes not previously recognized.[9]