Auscultation is the term for listening to the internal sounds of the body, usually using a stethoscope. Auscultation is performed for the purposes of examining the circulatory system and respiratory system (heart sounds and breath sounds), as well as the gastrointestinal system (bowel sounds). It is an integral part of physical examination of a patient and is routinely used to provide strong evidence in including or excluding different pathological conditions that are manifested clinically in the patient.

The stethoscope comprises a bell and a diaphragm. The bell is most effective at transmitting lower frequency sounds, while the diaphragm is most effective at transmitting higher frequency sounds[1]. In other words, the bell is designed to hear low pitched sounds and the diaphragm is designed to hear high pitched sounds. They are connected via rubber tubing to the ear pieces. These should be worn facing forward as the ear canals run anteriorly.

To optimise the effectiveness of auscultation the surroundings should be:[2]

Ideally, for Respiratory examination, the patient would be sitting.

Auscultate from side to side and top to bottom. Omit the areas covered by the scapulae.

Compare one side to the other looking for asymmetry and note the location and quality of the sounds you hear.

Vesicular - are usually quiet, mostly inspiratory, with a distinctive pause before a quieter expiratory phase. They are soft and low pitched with a rustling quality during inspiration and are even softer during expiration. These are the most commonly auscultated breath sounds, normally heard over the most of the lung surface. They have an inspiration/expiratory ratio of 3 to 1 or I:E of 3:1.

These are heard over the 1st and 2nd intercostal spaces and the interscapular area. The inspiratory and expiratory phases are roughly equal in length. They reflect a mixture of the pitch of the bronchial breath sounds heard near the trachea and the alveoli with the vesicular sound.

These are normally heard over the manubrium. Expiratory phase is greater than inspiratory. The expiratory pitch is high and intensity is loud. Hollow, tubular sounds that are lower pitched.

These sound are heard directly over the trachea. Inspiratory phase equals the expiratory phase. The sound is very loud and the pitch very high.

Crackles (rales) are caused by excessive fluid (secretions) in the airways. It is caused by either an exudate or a transudate. Exudate is due to lung infection e.g pneumonia while transudate such as congestive heart failure[5]. A crackle occurs when a small airways pop’s open during inspiration after collapsing due to loos esecretions or lack of aeration during expiration (atelectasis)[6]. Crackles are much more common in inspiratory than in expiratory.

Crackles are high-pitched and discontinuous. They sound like hair being rubbed together[6]. There are three different types; fine, medium and coarse.

Wheezes are an expiratory sound caused by forced airflow through collapsed airways. Due to the collapsed or abnormally narrow airway, the velocity of air in the lungs is elevated[8]. Wheezes are continuous high pitched hissing sounds. They are heard more frequently on expiration than on inspiration. If they are monophonic it us due to an obstruction in one airway only but if they are polyphonic than the cause is a more general obstruction of airways[9]. Where the wheeze occurs in the respiratory cycle depends on the obstructions location[10], if wheezing occurs in the expiratory phase of respiration it is usually connected to broncholiar disease[11]. If the wheezing is in the inspiratory phase, it is an indicator of stiff stenosis whose causes range from tumours to scarring. One of the main causes of wheezing is asthma[11] other causes could be pulmonary edema, interstitial lung disease and chronic bronchitis.

Rhonchi are caused by obstruction or secretions in the bronchial airways. They are coarse, continuous low pitched rattlings sounds that are heard on inspiration and expiration that sound very much like snoring. They can be heard in patients with pneumonia, bronchiectasis, chronic obstructive pulmonary disease (COPD), chronic bronchitis or cystic fibrosis.

Pleural Rub produces a creaking or brushing sound. These occur when the pleural surfaces are inflamed and as a result rub against one another. They are heard during both inspiratory and expiratory phases of the lung cycle and can be both continuous and discontinuous. Pleural rub can suggest pleurisy, pneumothorax or pleural effusion.

It should be noted that auscultation comes after palpation, the patient is normally lying comfortably at a 45 degree angle with their chest region fully exposed.

There are four main regions of interest for auscultation, and a brief knowledge in human anatomy is crucial to pinpoint them.

The 4 pericardial areas are examined with diaphragm[5], including:

The four pericardial areas relate to the heart sounds and can detect various abnormalities in the heart such as the valve stenosis or incompetence which are diagnostic for many diseases in the cardiovascular system. However, there are specific manoeuvres done for further investigation, and some of these would include[12] 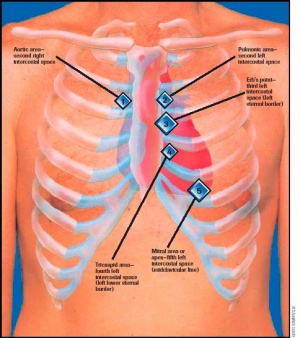 These consist of two sharp sounds, S1 and S2, which differentiate systole from diastole and no other significant sounds will be heard. A systole occurs when the ventricles fill with blood and the heart contracts. The sudden closure of the tricuspid valves and AV valves is caused by a decrease in pressure in the atria and a sharp increase in the intraventricular pressure which exceeds the pressure of the atria. This is the S1 sound. The ventricles continue to contract throughout systole forcing blood through the aortic and pulmonary semilunar valves. S2 is formed at the end of systole when the ventricles begin to relax and the pressure in the aorta and pulmonary artery begin to exceed the intraventricular pressure. When this happens there is a slight back-flow of blood into the heart which causes the semilunar valves to snap shut, producing S2. These two sounds are to be considered single and instantaneous, indicating a normal healthy heart.

This is a systolic murmur that indicates a physiological defect. The word stenosis refers to the abnormal turbulent flow of blood due to a narrow damaged blood vessel. Stenosis in the aorta results in this murmuring sound which occurs between S1 and S2. In addition to this other sounds may be heard such as S4 which results from the heavy work required by the left ventricle to pump the blood though the stenotic valve. Also because S2 is caused by the sudden closing of the aortic valve, a weaken poorly functioning stenotic valve may cause S2 to be very discreet or even inaudible. This murmur is usually best heard over the aortic area.it is important to note that this is a sharp murmur with notable start and finishing points within a systole. We can usually tell how serious the stenosis is by listening to the timing of the murmur. An early peaking murmur is usually a less serious case of stenosis, while a late peaking murmur indicates more serious stenosis, because the stenotic valve is quite weak and the ventricle takes a lot more time to build the strength to pump the blood out of the heart.

This sound is thought to e caused by the failure of the papillary muscles and/or chordae to maintain tension during the late systole. As the left ventricle decreases in size, the papillary muscles and/or the chordae don’t tether the valve resulting in the mitral valve remaining slightly open and a slight regurgitation period into the atrium. The sound is formed during systole just when the valve prolapses and consists of a mid-systolic click just after a normal S1 sound. This sound alone is enough for diagnosis, however, MVP is often followed by a murmur best heard at the apex of the heart. In addition to this, it can be enhanced or decreased by certain manoeuvres. Standing the patient up will decrease the volume of the left ventricle and cause the MVP to occur more frequently. If the patients squats the opposite effect is seen, the ventricle volume is increased and more tension is put on the papillary muscles and chordae which help close the valve. This condition is common in young adult women and causes symptoms of light-headedness, anxiety and palpitation attacks. Symptoms are usually mild but patients with evidence of the MVP should be given antibiotic prophylaxis when undergoing any invasive procedures to help avoid the risk of bacterial endocarditis.

This is similar to aortic stenosis in that it takes longer for the right ventricle to pump the blood out of the heart through the stenotic pulmonary valve. This results in a delay in the valve closing and causes a split in S2. This splitting of S2 is heard because the aortic valve shuts before the stenotic pulmonary valve at the end of the systole. The splitting is best heard in the pulmonic area, the second intercostal space along the left sternal border. Maneuvers such as a heavy inspiration can increase the intensity of this murmur.

Below is a useful video that shows the normal sounds of heart as well as heart murmurs along with the possible diagnosis of each sound:

In order to get accurate sounds of the heart, appropriate auscultation procedure must be undertaken. Below is a video that shows the correct technique for heart auscultation: