Kinesiology taping (KT) is a therapeutic tool and has become increasingly popular within the sporting arena. Taping has been used for a long time for the prevention and treatment of sporting injuries. KT is not only used for sporting injuries but for a variety of other conditions. It was developed by Japanaese Chiropractor Dr. Kenzo Kase in the 1970's with the intention to alleviate pain [1] and improve the healing in soft tissues[2]. There are many proposed benefits to KT, including: proprioceptive facilitation; reduced muscle fatigue; muscle facilitation; reduced delayed-onset muscle soreness; pain inhibition; enhanced healing, such as reducing oedema, and improvement of lymphatic drainage and blood flow[3].

KT is manufactured pre-stretched by 15-25% as it is applied to the backing paper. It is characterised by the ability to stretch to 120-140% of its original length and, following application, recoil back towards its unstretched length. KT purportedly mimics the physical qualities of the skin as it is believed to be the same weight and thickness of the epidermis along with its inherent elastic properties[4]. It is comprised of polymer elastic wrapped in 100% cotton fibres, which allows for evaporation of moisture. The glue is heat-activated and is applied in a wave-like pattern to mimic the qualities of the fingerprint on the finger tip. KT is both waterproof and breathable and it can be worn during exercise, showering and even swimming. It dries quickly and seldom causes skin irritation, however; if skin irritation does occur, advise patient to remove tape immediately and wash the area with warm soapy water to remove any residual adhesive. When properly applied, it will last up to 3-5 days.

The type of application theoretically determines the physiological outcome: for example, KT is applied unstretched over manually stretched skin above the injured muscle. This type of application will cause the skin to form convolutions which lift the skin[2]. Theories suggest that these convolutions encourage regeneration of injured tissue by increasing interstitial space and alleviating interstitial pressures which occur from swelling post injury[5]. This decrease in pressure also decompresses subcutaneous nociceptors, leading to decreased pain[2]. It is also theorised that lifting the skin detaches filaments which attach the skin to endothelial cells of the lymphatic and capillary beds. This is proposed to to create channels which allows for lymph to drain, thus reducing swelling and allowing increased blood flow to the area[6]. The evidence for these theories is still in its infancy and requires extensive research. 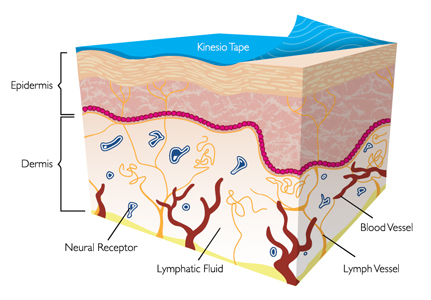 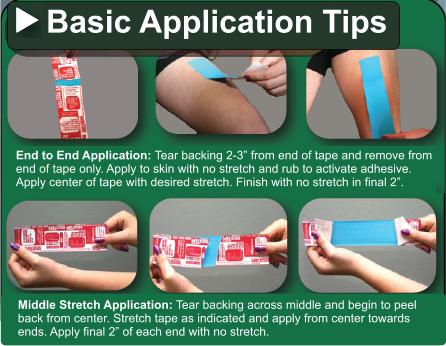 KT can be applied in the shape of a 'Y', 'I', 'X', 'Fan', 'Web' or 'Donut'. The shape selection depends on the the size of the affected muscle and the result you are trying to achieve. 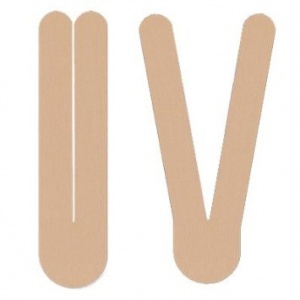 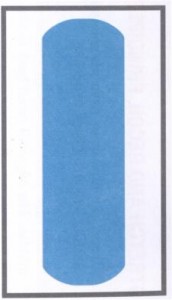 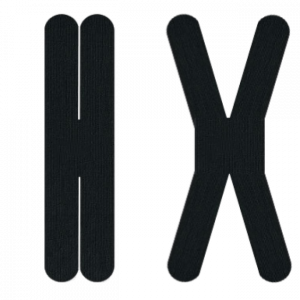 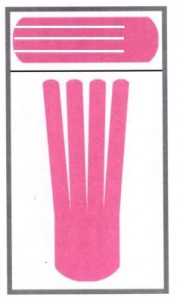 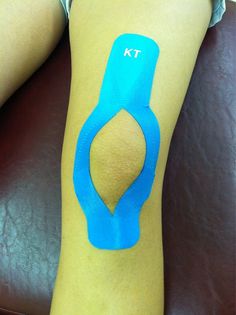 The target muscle should be elongated prior to stretch. KT requires none to partial stretch to be applied on tape.

Line of pull of the tape is key