Breathing is one of our most crucial functions and is central to health - it is the foundation of movement, health, and wellbeing.[1][2] Respiration refers to the movement of oxygen into the body and the removal of carbon dioxide. It is essential in the metabolisation of energy.[2]

Breathing affects the entire body. It has a significant role in ensuring that allostasis (achieving homeostasis) is maintained, as well as being involved in postural stability and mobility of the trunk and spine.[3] Van Dixhoorn summarises the key functions of breathing as follows:[1]

An optional breath is usually defined as a three-dimensional abdominal breath that results in the expansion of the lower ribs.[3].

While essential for survival, this pattern can be disrupted by several factors, including interference from our:

This disruption results in dysfunctional breathing.

One of the earliest discussions of the symptoms that are now associated with breathing pattern disorders was a report by Dr Jacob M Da Costa in 1871. He noted that several American civil war soldiers complained of a specific set of symptoms that mimicked those of heart disease: fatigue on exertion, palpitations, sweating, chest pain and shortness of breath[1][4] Da Costa’s syndrome became known as Soldier’s Heart or Irritable Heart, although he noted that similar features often presented in private practice as well.[1][5]

The term “Hyperventilation” was coined by Kerr and colleagues in 1937 and has been in common use since.

However, research into this condition continued from these early reports and definitions.

Hyperventilation is the most widely recognised form of dysfunctional breathing.[9]

Breathing disorders are defined as inappropriate breathing, which is persistent enough to cause symptoms with no clear organic cause[10] - although an organic disorder (asthma, COPD, diabetes, anaemia) may be present[2]

While work on classification is continuing, it is important to note that breathing dysfunction has many components. An accurate subjective assessment will enable physiotherapists to determine what is driving the dysfunctional breathing.[2]

Breathing pattern disorders remain poorly understood, so it is thought that this condition is likely underdiagnosed or misdiagnosed:[8]

The lungs play an essential role in providing cells with oxygen via the blood and cardiovascular system, which enables cells to produce energy.[14] 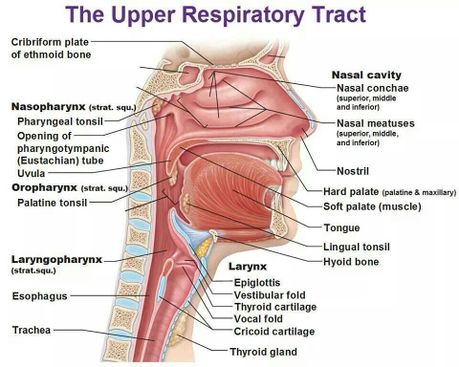 The conduction zone refers to the areas where the air is transported to the lungs from the external environment. These are the:[14]

The nasal cavities and turbinates play an important physiological function as they humidify, moisten, warm and filter air.[2] The paranasal sinuses produce nitric oxide (NO), which diffuses to the lungs and bronchi, particularly during nasal breathing. NO has a vasodilatory and bronchodilatory effect.[16][17]. It plays a significant role in nasal patency, uptake of oxygen and the sterilisation of the lungs and airways.[2]

The upper portion of the pharynx is the nasopharynx, which plays an important role in pressure control.

The vocal cords are situated in the larynx.[18] Dysfunctions related to the vocal folds include vocal cord dysfunction, and Exercise-Induced Laryngeal Obstruction and should be considered when exploring breathing pattern disorders.[2]

After air travels to the bronchioles, it passes on to the alveoli where ventilation and perfusion take place (ie the respiratory zone).[2][14]

There are three groups of respiratory muscles:[19]

The diaphragm is the main musculoskeletal muscle involved in respiration. When the diaphragm contracts, the abdomen and lower part of the rib cage expand.[19]

The rib cage muscles, including the intercostals, the parasternal, the scalene and the neck muscles, are involved in inspiration and expiration. They mostly act on the upper part of the rib cage.[19]

The diaphragm is a dome-shaped muscle that is primarily involved in respiration. The superior portion of the diaphragm originates at the xiphoid process anteriorly, the lower six costal cartilages of the thorax laterally and the first two lumbar vertebrae posteriorly. It converges into a central tendon which forms the dome’s crest.[20] The peripheral segment attaches to the chest wall and abdominal cavity.[20]

It is innovated by the right and left phrenic nerves (C3, 4, 5) and has three major openings - the aorta, vena cava and the oesophagus.[20][2]

The diaphragm and intercostal muscles are the only muscles that are active during quiet inspiration.[2]

The diaphragm contracts and pulls its central tendon down. This increases the negative pressure inside the thoracic cavity, which draws air in. At the same time, the external intercostal muscles raise the anterior chest wall - in a bucket handle action.[20] As the chest cavity becomes larger and wider, the air can enter from outside the body.[20]

During quiet exhalation, the rib cage and chest wall relax and return to their original position. Concurrently, the diaphragm relaxes and lifts. This movement expels the air from the lungs.[20] The diaphragm of individuals who have hyper-inflated chests (i.e. those with COPD or voluntary hyperinflation) will not be able to return to their natural resting position during exhalation.[2]

The diaphragm has many other roles aside from respiration. When it contracts, it works with the anterior abdominal wall muscles to increase intra-abdominal pressure - thus, it aids processes such as micturition (urination), defecation, and parturition (giving birth).[20] It is also integral to stability during locomotion.[2]

It also acts essentially as a pump.[2] On inhalation, its descent decreases intrathoracic pressure and improves intra-abdominal pressure. This compresses the inferior vena cava and helps push deoxygenated blood into the right atrium. It also compresses abdominal lymph vessels assisting lymph movement.[20] Similarly, cerebrospinal fluid is pumped into the brain and pumped back down on exhalation. Thus, the diaphragm plays a significant role in the movement, mobility and cleansing of the whole body.[2]

All muscles work together to ensure an efficient breathing pattern.[2]

The pelvic floor also plays an important role in breathing.

Breathing is essential for survival and impacts many systems, including our biomechanics, biochemistry and psychophysiology.