A hip fracture occurs when the proximal end of the femur, near the hip joint, is broken.About one-third of elderly people living independently fall every year, with 10% of these falls resulting in a hip fracture.[1]  Such a fracture is a serious injury that occurs mostly in elderly people over 65 years and complications can be life-threatening.[2](level of evidence 1A) The femur is the largest and strongest bone in the body, so it requires a large or high impact force to break. Most femur fractures are the result of a high energy trauma, such as a motor accident, gunshot wound, or jump/fall from a height.[2]However, in an older population, a simple fall may cause a femoral fracture due to reduced bone mineral density. A femoral fracture is a very serious injury and needs 3-6 months to heal.[2] High mortality, long-term disability and huge socio-economic burden are the main consequences of a hip fracture. The biggest risk factors for running up a hip fracture are osteoporosis and cognitive impairment.[2]

The hip joint is a ball and socket joint, formed by the head of the femur and the acetabulum of the pelvis. 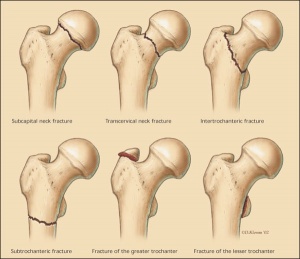 The head of the femur is almost ( for ¾ ) shaped like a sphere. The acetabulum is formed by the three parts of the os Coxae. It is a fusion of illium, ischium and pubis. Through this fusion, the acetabulum is shaped like a hemisphere (the inner section of a sphere) thereby the acetabulum is not covering the entire head of the femur.The convex head fits perfectly in the concave socket of the acetabulum forming a synovial joint. From an osteological viewpoint, the proximal end of the femur in four major parts, namely: femoral head, femoral neck, greater trochanter and the lesser trochanter. These parts are most often and most closely involved with hip fractures. The hip joint is a very sturdy joint, due to the tight fitting of the bones and the strong surrounding ligaments and muscles so a hip luxation will less likely take place. ce. ☃☃Hip fractures can be classified into intracapsular (femoral neck) fractures and extracapsular fractures. The intracapsular fractures are contained within the hip capsule itself. Those fractures are subcapital neck fracture and transcervical neck fracture. The extracapsular fractures are intertrochantericic and subtrochanteric fracture. You also have a greater and lesser trochantefracturees[3] (figure1)

Hip fractures can be classified into intracapsular and extracapsular fractures[6] (figure2).

1) Intracapsular fractures: also known as femoral neck fractures. It occurs within the hip capsule and accounts for 45% of all acute hip fractures in the elderly.[7] It mostly results from a low-impact fall from a standing position or from twisting on a planted foot.[8] Femoral neck fractures are susceptible to malunion and avascular necrosis of the femoral head because of the limited blood supply to the area. Intracapsular fractures are further classified as nondisplaced or displaced based on radiographic findings[9] (figure 3). 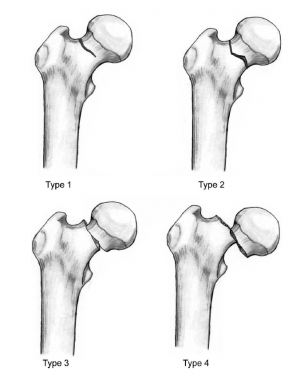 About 3% of hip fractures are related to localized bone weakness at the fracture site, secondary to tumor, followed by bone cysts, or Paget’s disease. More than half of the remaining patients have osteoporosis, and nearly all are osteopenia[10]

A substantial portion of the population is at risk of hip fracture by virtue of low bone mass and frequent falls.[11] Fracture incidence rates rise dramatically with age, and populations are aging rapidly around the world. Due to the sheer size of the affected population, control programs for osteoporosis are likely to be expensive, but effective and efficient prevention efforts have great potential promise.The incidence rates themselves are rising in some regions, and any further improvements in life expectancy will compound the problem.[11]

Risk factors other than low bone mineral density (BMD), defined by the National Osteoporosis Foundation (National Osteoporosis Foundation, 1998) are previous history of fracture as an adult, history of fracture in a first-degree relative, low body weight, and current cigarette smoking.[17]Another risk factor that is frequently discussed for the last years is the proximal femoral geometry, it is suggested as an important marker for the hip fracture risks.[17]

If MRI is contraindicated,a bone scan is an alternative imaging option.  Bone scans have a sensitivity of 93% and specificity of 95% in detecting occult hip fractures.[23]CT scan is another modality that can be used to diagnose occult hip fractures, although its efficacy has been proven by few studies.[24]

Hip fractures carry an approximately 30% risk of mortality at 1 year,[26]and 25% to 75% of community-dwelling adults may not regain their pre-fracture level of function.[27][28][28] Predictors of mortality include significant comorbid disease, low pre-injury cognitive function, abnormal preoperative ECG, age >85 years, and decreased pre-fracture mobility. Early surgery was not associated with improved function and increased mortality though it was associated with reduced pain and length of stay. Early surgery also resulted in fewer complications. These conclusions were obtained by comparing patients having surgery within 24 hours with those having surgery after 24 hours on the following outcomes[29]: (Level of Evidence A2)

In the study of Diamond TH et al. the main prognostic factors such as pre-existing illness and osteoporotic risk factor; outcome data such as fracture-related complications, mortality, and level of function as measured by the Barthel index of activities of daily living at 6 and 12 months postfracture.
The results of these outcome measures are that fracture-related complications affected similar proportions of men and women (30% v. 32%), and mean length of hospital stay was similar. Fourteen percent of men died in hospital compared with only 6% of women (P = 0.06). Men had more risk factors for osteoporosis (P < 0.01).[30]
Physical functioning (measured by the Barthel index) deteriorated significantly in men from 14.9 at baseline to 13.4 at six months (P < 0.05) and 12.4 at 12 months (P < 0.05) after fracture.[30]

Jay Magaziner et al. investigated eight areas of function after hip fracture. This eight areas of function include upper and lower extremity physical and instrumental activities of daily living, gait and balance, social, cognitive, and affective function. They were measured by personal interview and direct observation during hospitalization at 2, 6, 12, 18, and 24 months. Levels of recovery are described in each area, and time to reach maximal recovery was estimated using Generalized Estimating Equations and longitudinal data. Most areas of functioning showed progressive lessening of dependence over the first postfracture year, with different levels of recovery and time to maximum levels observed for each area. New dependency in physical and instrumental tasks for those not requiring equipment or human assistance prefracture ranged from as low as 20.3% for putting on pants to as high as 89.9% for climbing five stairs. Recuperation times were specific to area of function, ranging from approximately 4 months for depressive symptoms (3.9 months), upper extremity function (4.3 months), and cognition (4.4 months) to almost a year for lower extremity function[31]

On physical examination, findings on the patient with a hip fracture may include the following: 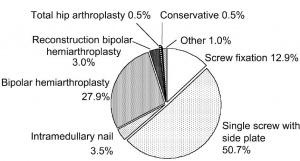 The management of hip fracture is usually a combination of surgery and rehabilitation. It also depends on the location of the fracture and whether it is displaced. In comparison to conservative management (bed rest and traction), operative management results in a reduced length of hospital stay and improved rehabilitation.[32] Surgery <48 hours after admission may be associated with lower morbidity and may decrease hospital stay.[33][34] It is associated with a 29% risk reduction in mortality as well as a significant reduction in in-hospital pneumonia (relative risk reduction 41%) and pressure sores (relative risk reduction 52%).[35][36]Intracapsular Fractures

Extracapsular Fractures
Surgical stabilization is standard treatment, and non-operative measures are only considered for patients who are at very high surgical risk or who have a limited life expectancy. The goal of surgery is to achieve a stable fracture reduction and fixation, allowing early weight bearing and mobilization of the patient. Non-operative management is only considered for non-ambulatory patients with minimal pain and for medically unstable patients with a major un-correctable comorbid disease or terminal illness.[3]For displaced intertronchanteric fractures, operative management includes internal fixation with either a dynamic hip screw,[45]  or a cephalomedullary nail. [46] Dynamic hip screw is preferred because of decreased complication rate and reoperation rate.[47] [48]

In a study by Mangione et al, moderate to large improvements in physical performance and quality of life was found in patients who had a 10- week home-based progressive resistance exercise program[49] (Level of evidence: 1b) Also, among patients who had completed standard rehabilitation after hip fracture, the use of a home-based functionally oriented exercise program resulted in modest improvement in physical function at 6 months after randomization.[50] (Level of evidence: 1b)

The patient training begins the day after surgery from a sitting position, with abducted hip during transfer from bed to chair.[51] (Level of evidence: 5) On the second and third post-operative day the patient can start with walking between parallel bars, and later on, they can walk with a walker or a cane. A warming up on a stationary bicycle for 10 to 15 minutes is recommended.[52] (Level of evidence: 2a) Progressive weight-bearing as tolerated till full weight-bearing should start soon after surgery according to general physical status. When internal fixation is performed, partial weight-bearing is recommended for a period of 8–10 weeks (according to the radiological evaluation of fracture healing), and after 3 months full weight-bearing should be allowed. Range of motion exercises for the hip, knee and ankle. The patient can also begin strengthening exercises based on the surgeon's orders (typically six weeks post-op). Patients should also undergo balance and proprioceptive rehab and these abilities are quickly lost with inactivity.

Prolonged bed rest can increase the risk of pressure sores, atelectasis, pneumonia, deconditioning, and thromboembolic complications. Weight-bearing immediately after hip fracture surgery is safe in most patients.[53] (Level of evidence: 2a). Complications following hip surgery involve blood clots, pneumonia, wound infections, and more, all of which can be reduced with activity[54] (Level of evidence: 2a)

There are some important rules postoperative:


Weight-bearing exercises are very important for mobility, balance, activities of daily living and quality of life[55][5](Level of evidence: 1a), examples: stepping in different directions, standing up and sitting down, tapping the foot and stepping onto and off a block. 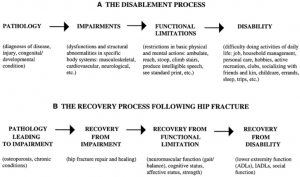 For patients who underwent a prosthetic replacement have to avoid for approximately 12 weeks:

Rehabilitation program components[56](Level of evidence: 1b):

The number of hip fractures worldwide will increase up to 7-21 million incidences each year in 2050.[57] Mortality associated with a hip fracture is about 5-10% after one month. One year after fracture, about a third of patients will have died, compared with an expected annual mortality of about 10% in this age group.[57]Thus, only a third of the deaths are directly attributable to the hip fracture itself, but patients and relatives often think that the fracture has played a crucial part in the final illness. More than 10% of survivors will be unable to return to their previous residence. Most of the remainder will have some residual pain or disability. Most people who sustain the injury require surgery followed by a period of rehabilitation.Treatment is generally surgical to replace or repair the broken bone. Some loss of function is to be expected in most patients.