The IFP is found in the anterior knee compartment as a mass of adipose tissue that lies intracapsular but is extra synovial (extra-articular)[1]. 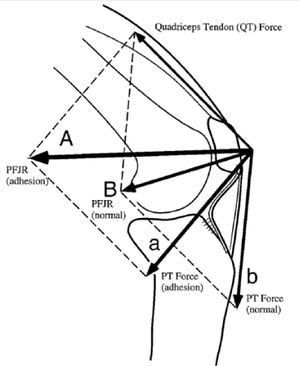 Innervated mainly by the posterior tibial nerve, the IFP can be a source of both localised and severe knee pain. This could be attributed to the presence of type VIa nerve endings[3] which could be activated through mechanical deformation or chemical pain mediators.  Substance P-nerve fibers are also present in individuals with anterior knee pain, particularly when the infrapatellar fat pad is inflamed[4]. As a potential source of inflammation and pain, some authors considered the fat pad to be a key structure in patellar tendinopathy[5] and osteoarthritis[6].

The IFP is a dynamic structure. It alters position, pressure, and volume throughout the knee ROM[7]. When the knee moves into flexion, the superolateral portion of the fat pad becomes relaxed, freely expansive and moves posteriorly. In extension, the IFP lies between the lateral patella facet and quadriceps tendon. Therefore, most commonly observed symptoms are associated with extension. However, it could also be seen in in flexion, where pain is provoked by the trapped IFP between the patella tendon and anterior femur[2].

IFP facilitates gliding between the femoral condyles and joint capsule. Knee mechanics can be altered when there is adhesion in the fat pad that changes the position of the patella and patellar tendon. Consequently, the effectiveness of the extensor mechanism is compromised, decreasing the effective moment arm placing greater demands on the quadriceps to produce the same knee extension force. A shorter patellar tendon length affects patellar mobility and creates resistance to lateral translation at full extension[7].

Early studies reported the fat pad to be a lubricant structure that facilitated the flow of synovial fluid inside the joint[2]. Subsequently it has become clear that the IFP yields more sophisticated functions due to its complex neurovascularity.

IFP has been found to release mesenchymal stem cells with enhanced chondrogenic activity but this finding requires further investigations [10].

Regulation of glycosaminoglycan release[12], a source of reparative cells[7], release of pro-inflammatory cytokines associated with elevated BMI[13] and collagen release[14] are also reported to be functions of IFP.

Duran et al [15] studied the IFP volume and found it to be decreased in patellar cartilage defect.

Little is known about the development of fat pad syndrome. The anatomical location of IFP exposes it to mechanical load, especially during extension[1]. Overuse or repeated micro trauma from sports or falls lead to hypertrophy. If the fat pad fails to recover it can become chronically inflamed which, if not properly managed, may result in fibrosis and ossification[1].

Predominantly seen in young women, jumping sports and ligamentous laxity are also considered to be risk factors for Hoffa's disease[1].

The inflamed fat pad is often enlarged, firm in consistency and easy to palpate. Hoffa’s test can be performed. To avoid pain provocation in adjacent structures and incur false results, Krumar et al [16] suggested a modification of hoffa’s test. This involves taking the knee into passive forced hyperextension by lifting the heel and keeping anterior pressure on the tibia. This position stimulates pain exclusively in the fat pad, if it is inflamed[2].

Gliding the patella in all four directions (medially, laterally, superiorly and inferiorly) is important to detect adhesion or movement restriction during knee movement, particularly in hyperextension. Pain in hyperextension is a strong indicator of the presence of inflamed IFP [7].

Examination should also aim to exclude any other radiating pathologies particularly from spine and hip.

Fat pad syndrome could be a primary disorder or secondary to other pathologies such as meniscus injuries and or ligamentous tear. Prevalence is not widely investigated, however, two studies reported isolated fat pad in 1% [18] of anterior knee pain cases and 6.8%[16] as a secondary disorder. Synovitis and swelling of the fat pad were reported after anterior cruciate ligament (ACL) rupture[19].

A detailed history and findings on functional assessment are important to discriminate fat pad syndrome from other conditions such as : patellar lateral femoral friction syndrome, impingement of the infrapatellar plica and arthrofibrosisor “cyclops syndrome”. Refer to the discussion in this article to learn about the characteristics of each condition.

Symptoms of fat pad syndrome are anterior knee pain, often retropatellar and infrapatellar. Patellofemoral crepitus might be present, with knee loading such as in stairs negotiation[2], squatting, jumping and running[7]. Effusion and decreased ROM are often seen with inflamed IFP.

Pain and/or discomfort from long walks, flat shoes and prolonged standing refer mostly to fat pad syndrome. Pain resulting from up or down hill walking is a characteristic of PFPS.

MRI is the best imaging technique in diagnosing IFP inflammation[1]. Edema of the superior/posterior fat pad, inflamed infrapatellar bursa are easily detected by magnetic resonance. However, it is recommended to refer the patient to MRI only to exclude any other pathologies , particularly when there is a history of trauma [2].

Patients are often prescribed conservative treatment and physiotherapy. If the symptoms persisted. other approaches are introduced.

Diagnostic and therapeutic injections of local anesthetics and steroid into the fat pad resulted in immediate pain relief and reconstruction of movement[2].

An average improvement of 4.83 on VAS was reported following Ultrasound guided alcohol ablation by House and Connell[21]

Refer to the case reports in this article to learn about different management approaches.