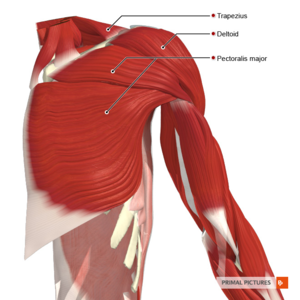 The Deltoid muscle is a large triangular shaped muscle which lies over the glenohumeral joint and which gives the shoulder its rounded contour. It is named after the Greek letter delta, which is shaped like an equilateral triangle. It comprises 3 distinct portions each of which produces a different movement of the glenohumeral joint, commonly named the anterior, mid (or lateral) and posterior heads. 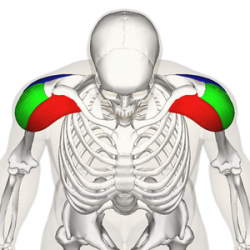 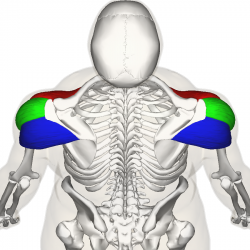 Lateral third, Anterior Surface of the Clavicle (close to the lateral fibres of pectoralis major).

Spine of the Scapula, Posterior Border.

Fibres from all heads converge to insert into the deltoid tuberosity on the humerus.

The deltoid fascia is continuous with the brachial fascia and connects to the medial and lateral intermuscular septa[1].

An important function of deltoid is the prevention of subluxation or even dislocation of the head of the humerus particularly when carrying a load. Deltoid is the prime mover of shoulder abduction.

All heads of deltoid work together to produce abduction of the Shoulder Joint. In addition, each individual head produces the following:

In case of patients suffering from Subacromial bursitis, there occurs impingement of deltoid muscle below the acromion process when the arm is hanging by the side leading to pain. Moreover, there occurs no pain while performing abduction movement of the arm due to vanishing of bursa under the acromion process. Subacromial or Subdeltoid bursitis is commonly seen secondary to supraspinatus tendonitis.[3]

During dislocation of the shoulder or fracture of surgical neck of the humerus, there occurs damage to axillary nerve. Moreover, the damage to axillary nerve leads to paralysis of deltoid muscle, where the examiner ask the patient to abduct the arm to 90 degrees and the resistance will be provided. There occurs no contraction of the muscle during abduction and there will be complete loss of strength up to 90 degrees of shoulder abduction. Apart from that, there will be loss of sensation over the lower halves of the deltoid in a badge like area known as regimental badge.[3]

Intramuscular injections are often given to the deltoid muscle. It should be provided to the middle of the deltoid to avoid injury to the axillary nerve.[3] 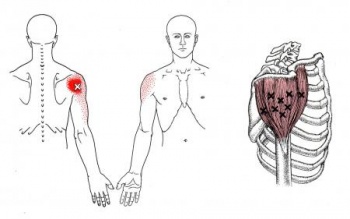 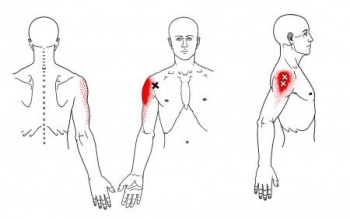 Flex elbow to 90 degrees and have patient abduct the shoulder against resistance.

Lie down flat on your back, with a pillow supporting your head.
Bend your elbow as far as possible. Then raise your arm to 90 degrees vertical, using the stronger arm to assist if necessary. Once you have got to 90 degrees, you can straighten your elbow. Hold your arm in this upright position with its own strength.


Circles: Slowly with your fingers, wrist and elbow straight move the arm in small circular movements clockwise and counterclockwise. Gradually increase the circle as comfortable (this may take a few weeks to increase to bigger and bigger circles).

As you get more confidence in controlling your shoulder movement, a lightweight e.g. a tin of beans or small paperweight, should be held in the affected hand.

Progress to sitting and standing:

Having more confidence in controlling your shoulder movement gradually go from lying down to sitting and eventually standing.
At this stage you may recline the head of your bed or put some pillows underneath your back to recline your position.
Repeat the same exercise again, this time against some gravity.
Start again from holding your arm in the upright position with its own strength.
Start first without any weights and progress to use the same lightweight you used before in the lying down position.

For re-education of concentric contracture of the deltoid muscle.
Make a fist with the hand of the affected side. The flat hand of the opposite side is providing resistance. Push your affected side hand against resistance from the other hand. Whilst doing this, you will notice that you can fully elevate your arm (above your head).
Repeat these exercises in order to ‘learn’ and re-educate your Deltoid muscle to perform this ‘concentric contracture’ even without pushing against your other arm.