Central pontine myelinolysis (CPM) [now termed osmotic demyelination syndrome (ODS)], characterized by damage to regions of the brain (most commonly pontine white matter tracts) after rapid correction of metabolic disturbances such as hyponatremia (low amounts of sodium in the blood) 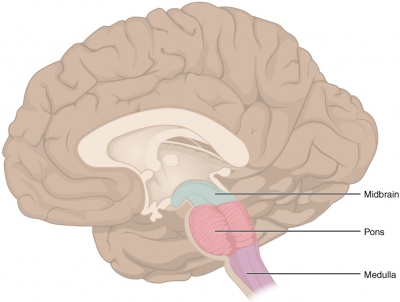 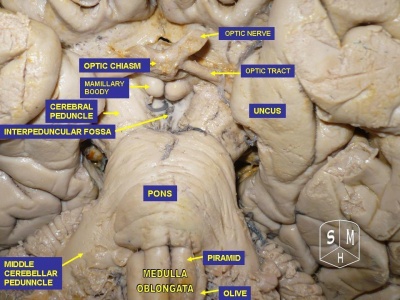 Central pontine myelinolysis is a concentrated, frequently symmetric, noninflammatory demyelination within the pons. The area involved is usually confined to the basal part of the pons but occasionally involves the tegmentum also

The Pons is situated in the brainstem. It lies above the medulla, below the midbrain and anterior to the cerebellum.

It is one of the demyelinating conditions and was first described by Adams et al in 1959.[2] In at least 10% of patients with central pontine myelinolysis, demyelination also occurs in extrapontine regions, including the mid brain, thalamus, basal nuclei and cerebellum. The exact mechanism that strips the myelin sheath is unknown.


Central pontine myelinolysis occurs most often as a complication of treatment of patients with profound, life-threatening hyponatremia (low sodium) and is a consequence of a rapid rise in serum tonicity following treatment in individuals with chronic, severe hyponatremia who have made intracellular adaptations to the prevailing hypotonicity.

Microscopically the lesion shows degeneration and loss of oligodendrocytes with preservation of axons unless the lesion is very advanced.

Patients more susceptible to CPM include those with a history of

Patients most commonly have a history of rapid sodium correction, greater than 0.5-1.0 mEq/L per hour. The most susceptible patients are those with chronic hyponatremia (>48 hours) or those with severe hyponatremia (Na <120 mEq/L).

The onset of symptoms is usually seen 1 to 14 days after electrolyte correction.

Conditions predisposing patients to central pontine myelinolysis include alcoholism, liver disease, malnutrition and hyponatremia (an electrolyte disturbance in which the sodium ion concentration in the plasma is lower than normal).

Burn patients may develop CPM and it can also occur with Wilson disease and neoplasia.

Patients who survive central pontine myelinolysis likely require extensive and prolonged neurorehabilitation. Incorporate occupational, physical, speech, and language therapists early in the care of such patients. Swallowing studies are necessary to evaluate for dysphagia and determine the risk for aspiration pneumonia.

Central pontine myelinolysis was once thought to be fatal, with a mortality of 90% to 100% (possibly because it was initially diagnosed at autopsy). The mortality rate has significantly decreased, with recent retrospective studies showing 94% survival (about 25%-40% make a complete recovery without deficits, and 25%-30% remain incapacitated). [5]