An Introduction to Understanding Your Runner 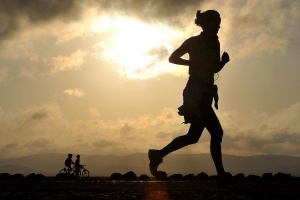 The popularity of running as a sport has increased widely over the last few decades [1]. It is not uncommon to hear that ''running a marathon'' is one of someone's life goals or on their bucket list. The belief that running a marathon is an important life event is adapted by many people and could have significant effects on their beliefs, behaviours and attitudes in general[2]

Running is a sport that comes with huge physical and psychological demands. People run for many reasons, to compete, to get fit, to socialise with other runners, some run to improve their mental health and others just love to run[3].

Running related injuries are part of the running experience. Runners present with a variety of musculoskeletal injuries including:

When it comes to the assessment of injuries, a holistic assessment approach is recommended to understand the needs of the runners and help them to manage their injuries successfully.

The published evidence is heavily focused on the physical aspects of running but the psychological factors also need to be well understood and investigated.

The Personality of the Runner[edit | edit source]

Personality is defined as the sum of characteristics that make a person unique[4]. Running is not only a physical task; it influences the characteristics of the individual particularly when done professionally and competitively. Personality traits are the differences among people that determine how the person perceives the world and reacts or responds to situations in a specifiable manner that could be predicted[5].

Marathoners are generally less introverted than non-athletes[5]. Different studies that looked at the personality of runners found that marathon runners showed cognitive anxiety, arousal, self-confidence, motivation and perception of the physical state[6]. In addition, hardy personality (i.e. a group of characteristics related to personal perception of control, commitment and challenges), intelligence and imaginations[7] were found to be higher among marathon runners when compared to the general population [1]

Increased pain tolerance was reported to be high in long-distance runners[8]. Using various psychological instruments, marathoners and other distance event athletes scored lower in depression, anxiety and neuroticism and higher in psychic vigour[9] and measures of achievement motivation and are primarily driven by intrinsic rewards[10]. Successful competitors tend to show the personality traits of what is known as the ''Iceberg Profile'' scoring less in anger, fatigue, depression, confusion and high in emotional stability[5]. 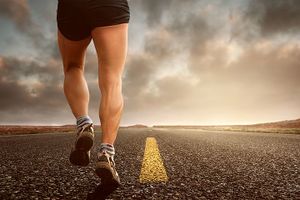 An essential question to ask runners when assessing running injuries: why do you run?[3]

Understanding runners' motivation can help in exploring their personalities and therefore essential when addressing running injuries or helping runners for better performance[3].

Motivation has been characterised as a matter of positive thinking, a high level of arousal, or a sense of confidence in one’s ability to achieve a goal. It is a process that characterizes one’s effort in terms of direction, intensity, and persistence towards achieving (or avoiding) an outcome. The direction refers to “what” the person is motivated to achieve, while the intensity dimension refers to how much effort one puts forward in pursuit of a goal. The persistence dimension refers to how long an individual continues to strive towards their goal in the face of challenge, difficulty or setbacks[12].

The motivation to manage weight, affiliation, coping with psychological distress or day to day life and self-esteem were expressed by female marathon finishers however, there weren't highly motivated to compete with others.[13]

Intrinsic motives refer to the inherent enjoyment driven from the act of running and have been found to be associated with more positive emotions and enhanced sports performance. Extrinsic motives such as achieving a certain time, receiving tangible rewards have consistently predicted more negative health and well-being outcomes[12],

The MOMS scale could predict the runner's likelihood to finish a marathon. Pre-drop outs had higher tendencies towards weight concern, social recognition, and affiliation motives compared to marathon finishers.

Runners with competitive motivations had the fastest average marathon finish times in a 1993 study [14] by Masters et al.

It is important to consider that running is a great personal challenge and gives the runner a sense of achievement [15] which could explain the difficulty for some runners to refrain from the sport when asked by their physiotherapists or doctors as part of their recovery plan[3].

While motivation might be a desirable quality in general, there are instances when it can become excessive and compulsive leading to significant psychosocial and health consequences. The term 'obligatory runners' is a form of compulsive exercise behaviour and refers to those who run at all costs, often despite negative consequences such as injuries or damaging effects on interpersonal relationships. Recognizing the patterns of overtraining in miles, days, and hours per week, often despite the presence of an injury, can help distinguish the obligatory runners. Studies reported several personality traits associated with this behaviour such as anxiety, perfectionist tendencies, a high exercise identity, and internalization of the thin/athletic-ideal body shape[16][17]. They also showed fear of making mistakes and doubts regarding the quality of their training[12].

Passion is a distinguished concept from motivations as not all aspects of motivation entitles liking. Passion is defined as a 'strong inclination toward a self-defining activity that one loves, values, and devotes a significant amount of time and energy to'. There are two types of passion harmonious and obsessive. The two types affect running and sports performance differently leading to distinct cognitive, affective, behavioural, social, and performance outcomes[12].

The psychological and emotional response of the runners may fluctuate over time depending on their level of participation and performance. Beginner marathon runners are often unprepared for the mental and emotional demands of training and competing in a marathon[18].

Psychology influence sports performance and the rate of injuries and plays an important role in recovery. The mental health model of sports performance states that that psychopathology is negatively correlated with athletic success[5]. 70–85% of successful athletes can be identified solely on the basis of the psychological data[9]

Anxiety levels could impact the performance and the return to running after an injury reducing the runner's sport-specific self-confidence and trigger a fear response. Therefore, psychological assessment should be integrated into clinical care throughout the entire recovery process. Reinjury anxiety during the return to sport phase can lead to an increased risk of reinjury or secondary injury[19].

Competitions greatly increase levels of anxiety. Anxiety is ''an emotional reaction to a situation or stimuli perceived to be threatening or dangerous, anxiety has also been considered as both a state and trait''[5]. A low to moderate anxiety level is believed to benefit the runner but some studies found high anxieties to be helpful for marathoners. The individual zones of optimal functioning (IZOF) state that for an athlete in any sport, optimal anxiety intensities may range from very low to extremely high. According to the IZOF, 30-40% of skilled marathoners are predicted to perform better under higher levels of anxiety[20].

Runners adopt various strategies to cope with their stresses. Skilled marathoners actively engage their senses by paying close attention to internal signs such as muscular pain, muscular fatigue, hydration, body temperature and respiration to optimise the efficiency and pace of running. This is referred to as the “association” strategy. Less-skilled runners use the ''dissociation'' strategy to intentionally distract themselves from the discomfort of intense physical exertion. This method involves different distracting techniques such as conducting complicated mathematical calculations, mentally designing and building a house, and reliving past experiences, each done to diminish the painful sensations of the marathon. The dissociation method is believed to increase the runner's risk of injury and has been associated with low sports performance[5].

They type of running and the performance level has different influences on the runner'spsychology[21]. Periods of intensive training and Insufficient recovery can place high physical and emotional demands on the athlete. Female ultra-marathon runners experienced a range of food disorders[1] and menstrual irregularity during periods of intensive training due to emotional stresses but their menstrual patterns were normalised once these stresses were removed[22].

Utilising interventions to address negative psychological responses can decrease the time lost due to an injury[23].