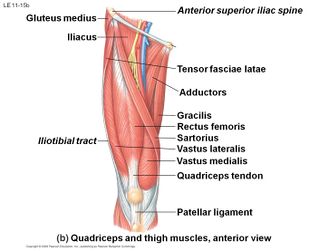 Quadriceps tendon tear is an injury that occurs when the tendon that attaches the quadriceps muscle (a group of 4 muscles in the front part of the femur) to the patella or kneecap tears. The quadriceps tendon may be partially or completely torn.[1] Quadriceps tendon rupture is a rare but serious injury. If this injury is not promptly recognized and early operated, it may lead to disability.[2]

The quadriceps tendon comes from the muscular junction of the, rectus femoris, vastus lateralis, vastus medialis and vastus intermedius, at the anterior superior pole of the patella.[3] The tendon is multilayered. The rectus femoris is the most superficial layer inserting on to the patella and the vastus lateralis and medialis are the middle layers.[4] The quadriceps tendon in combination with patellar tendon and the patella bone make up the extensor mechanism of the lower leg. These muscles derive their neurovascular innervation from the femoral nerve and artery. Specifically, the rectus femoris, vastus intermedius, and vastus lateralis gain their arterial supply from the lateral femoral circumflex artery. The vastus medialis gains its arterial supply from the femoral artery, superior medial genicular branch of the popliteal artery, and the profunda femoris artery. The vastus lateralis, vastus medialis, and the vastus intermedius act both as knee extenders as well as assist with patellar tracking. The vastus lateralis is the largest of the quadriceps muscles.  It helps to pull the patella laterally. This action must be counterbalanced by the vastus medialis, which is the smallest of the quadriceps muscles and acts to pull the patella medially. The vastus intermedius acts to help stabilize midline tracking of the patella. The combined contraction of this group of anterior thigh muscles causes extension of the lower leg. The rectus femoris also plays a role in hip flexion. A rupture of this central tendon drastically hinders knee extension and directly effects functionality. The degree that a quadriceps tendon rupture limits lower leg extension is based on the severity of tendon damage. Minor tendon tears may have minimal impact on extensor function, while complete tendon tears may totally impede lower leg extension.[3]

Lower leg extensor mechanism ruptures as a whole are very rare, but are reported to have high morbidity and are often debilitating.  Quadriceps tendon tears are reported to have an incidence of 1.37/100,000 and 0.68/100,000 for patellar tendon tears. Extensor mechanism ruptures are most common unilaterally. [3]Partial and complete tears occur predominantly in males. Ruptures of the quadriceps tendon occur relatively infrequently and usually occur in patients older than 40 years. But these ruptures may be seen in nearly any age group.[4]

Quadriceps tendon tears have a positive correlation with age and multiple medical comorbidities. This injury historically is more prevalent in males, with the age after 40 years. This is in opposition to patellar tendon tears, which commonly occur before age 40, and are often related to sports injuries. [3]
A muscle rupture often happens during a high impact action with a bad landing. During a landing there is a heavy load on a knee in flexion and the foot is planted on the ground (jump). The Quadriceps muscle makes a rapid, eccentric contraction. Other mechanism is caused by a force straight on the anterior side of the knee (fall). Patients typically present with acute knee pain, swelling, and functional loss following a stumble, fall, or giving way of the knee.[4]

Most quadriceps tendon tears happens because the tendon is weakened.[5]

It can be classified as partial or complete rupture. There is often a popping or tearing feeling at the time of event. Some patients are able to walk following this injury, but many cannot. The patient will be unable to straight the knee without help when the tendon is completely ruptured. Most of the patients present with acute knee pain, swelling and there is a palpable defect at the site of the tear. You can feel a dent/gap just proximal of the patella (the suprapatellar area) where the quadriceps tendon was torn. The quadriceps will be sensitive and cramping. There is a hematoma visible around the knee. Usually, obvious suprapatellar swelling, ecchymosis, and tenderness are present. The patella may sag or droop as a result of the quadriceps tendon tear but swelling may obscure this finding. There is a function loss especially there will be a loss of extension and also loss of stability. If the patient is not seen in the acute phase, diagnosing the rupture becomes more difficult, and it can be easily missed. Many patients are thought to have only simple knee sprains during their examination in the emergency room and are not given appropriate, immediate follow-up. [4]

The Lysholm and Tegner-score and the ROM of the knee were used to determine the progress and outcome of the rehabilitation and have been proven consistent, responsive and reliable. [9]

During the inspection you can see swelling around the suprapatellar area, there is a hematoma.
When you start the active examination you can immediately see that there is functional loss. Patients may have frequent buckling of the knee and difficulty with stair climbing. Patients may be able to ambulate but will do so with a gait demonstrating knee stiffness and elevation of the hip to accommodate the swing-through phase.
Testing for full, active extension against gravity is the most important aspect of the examination. The patient will be unable to perform a straight leg raise. Extension lags of varying degrees are seen, depending on the amount of retinacular damage. In incomplete ruptures, the patient may be able to fully extend the knee from the supine position but not from the flexed position. If only tendinitis is present, no extension lag should be noted with any test position. It is also important that you examine the contralateral knee to rule out bilateral rupture.
Results of neurologic examination are normal except for decreased quadriceps motor function and an absent patellar reflex. [4] There is also the quadriceps tendon rupture diagnose test of Jolles BM et al. which is an minimal invasive an easy available technique. [10]

Imaging is usually not indicated in quadriceps tendon injuries. However, ultrasound may have some clinical utility. Ultrasound can be used to detect a tendon defect, and to assess the degree of tendon gap with knee flexion. Ultrasound has also been used serially to assess healing and to determine the presence of associated hematomas, effusions, or calcifications. Radiographs are usually not helpful in making this diagnosis but may have some clinical utility in ruling out other associated injuries or conditions. Radiography may be helpful in determining patella position. A superior patella may be indicative of a patellar tendon rupture, while an inferior patella may be suggestive of a quadriceps tendon rupture. Plain radiography may also rule in or out associated patella avulsions or other associated patellar fractures. MRI may be used preoperatively but is usually not necessary due to advances in musculoskeletal ultrasound. [1]

When there are only partial ruptures the knee must be immobilized (3-6 weeks), surgery is mandatory when the tendon is completely torn and is best started as early as possible (latest 72h after injury), so the tendon can be reattached to the patella, after the surgery the knee is immobilized for 4-6 weeks.

To rehabilitate a complete tendon rupture you can choose between the conservative or a more aggressive treatment after surgery. The conservative treatment consisted of 4 to 6 weeks of immobilization in 10° of flexion. Two days after surgery intensive isometric quadriceps exercises can start. During the immobilization period, the weight bearing will be increased so full weight bearing will be reached after 6 weeks , then will be started with mobilizations to regain the full range of motion of the knee [11]. The more aggressive treatment which is not appropriate for every patient, consists of immediate mobilization and after 7 to 10 days full weight bearing, quadriceps settings, heel slides, massage, heel prop, ankle pumps. Brace-free ambulation was reached after 7 to 8 weeks, which lead to a faster rehabilitation.[12] [13] [14] [15]

Examples of exercises to be used:

Pain and swelling decrease over time, and quadriceps function can improve.
Athletes treated for partial or complete ruptures may return to play when several conditions are met, including the following:

Studies generally have reported good results following early repair of complete unilateral and bilateral quadriceps tendon ruptures. The type of repair, the location of the tear, the patient's age and sex, and the mechanism of injury do not appear to affect the results. Good ROM usually can be regained, but some persistent quadriceps weakness is fairly common. Most patients can return to their previous occupation, but many cannot return to their pre-injury activity level.[18]