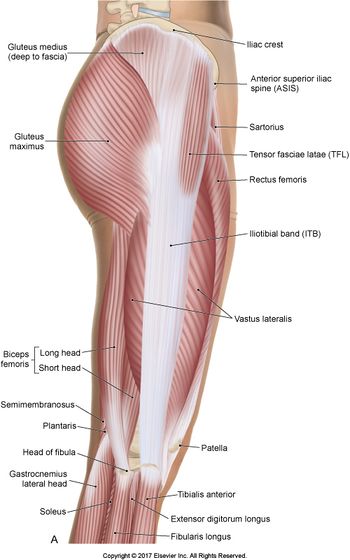 The iliotibial band (ITB) is a thick band of fascia formed proximally at the hip by the fascia of the gluteus maximus, gluteus medius and tensor fasciae latae muscles[1]. Its main functions are pelvic stabilisation and posture control.[2]

The ITB runs along the lateral thigh and serves as an important structure involved in lower extremity motion.

There are multiple clinical conditions that can present secondary to a spectrum of ITB dysfunction  eg external snapping hip syndrome, ITB syndrome[3].

Image 1: The iliotibial band (ITB). is a thick band of fascia formed proximally at the hip by the fascia of the gluteus maximus, gluteus medius and tensor fasciae latae muscles. 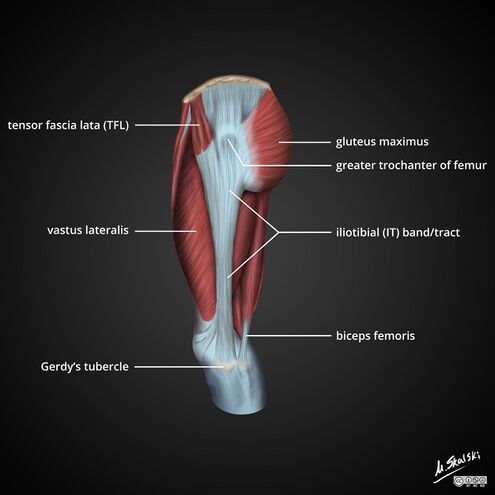 The iliotibial band (ITB) is a thick band of fascia formed proximally at the hip by the fascia of the gluteus maximus, gluteus medius and tensor fasciae latae muscles.

It traverses superficial to the vastus lateralis and inserts on the Gerdy tubercle of the lateral tibial plateau and partially to the supracondylar ridge of the lateral femur. There is also an anterior extension called the iliopatella band that connects the lateral patella and prevents medial translation of the patella.[5]

A small recess exists between the lateral femoral epicondyle and the ITB, which contains a synovial extension of the knee joint capsule (lateral synovial recess)[1]

Composition: The Iliotibial Band is made up of mostly collagen fibers. Collagen is the strongest protein found in nature. The collagen fibres are aligned in a very organized, vertical fashion as this allows for better force absorption with weight bearing activities. There is a small amount of elastin fibers amongst the layers of collagen, which allow it to be slightly elastic and pliable helping it act as a spring. However, this does not give it the ability to stretch like a muscle[4]

Distally, ITB function depends on the position of the knee joint

The iliotibial band is one of the most common running injuries we see as physiotherapists. It is considered a non-traumatic overuse injury and is often concomitant with underlying weakness of hip abductor muscles. For more see Iliotibial Band Syndrome. Clinical examination testing for ITB dysfunction is best elicited utilizing the Ober Test, see here

External snapping hip syndrome is another ITB pathology you may encounter[6]. Snapping Hip Syndrome is a condition that is characterized by a snapping sensation, and/or audible “snap” or “click” noise, in or around the hip when it is in motion.

It has been proposed that a tight iliotibial band (ITB) through its attachment of the lateral retinaculum into the patella could cause lateral patella tracking, patella tilt and compression. [7]This has implications in subjects presenting with patellofemoral pain syndrome (PFPS)