The observation of bleeding disorders in males happened early in the 2nd century. The Talmud stated that if 2 brothers had bled to death after circumcision then the next brother shouldn’t be circumcised. Also in the 12th century the Arabic physician al-Zahrāwī, known as Albucasis, described the death of male family members due to excessive haemorrhage after an injury.[4] 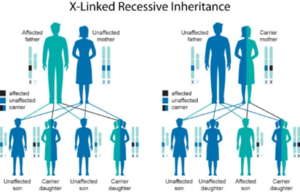 The term sex-linked refers to genes on the Sex chromosomes (usually the larger chromosome “X”)[5].

Females (XX) carry two X chromosomes. If a female carries a normal X-chromosome and a mutated X-chromosome. If the gene is recessive the female will be a carrier and will not suffer from the condition.[6] There is a 50% chance she will pass on the mutated x chromosome to her children.

The type of haemophilia is determined according to the protein factor that defected[10]. There are three known types of haemophilia:[11][12]

Acquired haemophilia is rare and occurs as the result of an autoimmune disease that attacks the protein clotting factors (especially factor VIII) and subsequently leads to manifestations similar to haemophilia A.[11]

Queen Victoria was a carrier of haemophilia B. She passed the mutated gene to three of her children. Her two daughters became carriers and her son, Prince Leopold, had haemophilia. Queen Victoria’s children married many royals across Europe and Russia. Haemophilia B was spread among royals for many generations with royals being either a carrier or haemophilic.[2][13]

Children with mild haemophilia do not show any manifestation except post-injury or dental extraction. Moderate and severe haemophiliacs may experience the following manifestations:[14]

CBC may appear normal in persons with haemophilia. If the patient has already experienced a massive haemorrhage, the CBC count may appear low.[15]

The APTT test measures the duration of blood clotting by measuring the clotting ability of factor VIII, IX, XI and XIII. In patients with haemophilia, the results will show a prolonged clotting time[15].

The PT test measures the duration of blood clotting by measuring the clotting ability of factor I, II, V, VII. In patients with haemophilia, the results are normal.[15]

Clotting factor tests are used to diagnosis haemophilia and its type and the degree of severity.  It measures the levels of factor VIII and IX.[15]

The severity of haemophilia is determined by the levels of clotting factor in the blood.[15]

Preventative therapy encompasses the usage of replacement therapy on a regular basis to prevent bleeding.[16]

Demand therapy is a less intensive approach that encompasses the usage of replacement therapy only when the need arises.[16]

Other types include Desmopressin (stimulates the production of the clotting factors), Antifibrinolytic Medicines and gene therapy)[16].

The Medical and Scientific Advisory Council (MASAC) recommends physical therapy management in haemophilia because the most common manifestation is joint and muscle bleeding.[18]

Joints that have recurrent bleedings in haemophilia are known as “Target Joints”. The most common target joints are knee, elbow, ankle, hip and shoulders.[17]

According to the MASAC; the purpose of an evaluation is to detect the musculoskeletal and activities limitations caused by haemophilia.[19]

The recommended physical therapy program by MASAC for muscles and joints bleeding is different in each recovery phase. There are three recovery phases: Acute, Subacute and Chronic. The management for all muscles follow specific guidelines, except for iliopsoas muscle, and all physical therapy suggested protocols are performed post factor replacement medication as follows:[20]

There are also some modalities and physical therapy tools that have been researched across the years to help patients with haemophilia. EMG biofeedback may be helpful with muscle strenthening and relaxation [21]

It was shown the Kinesio tape plays a role in haemophilia by supporting the muscles, allowing joint movement with support, decreasing pain and decreasing hematoma.[22]

It was shown that TENS has an impact on reducing pain for patients with haemophilia. It is applied as a low intensity electrical impulse to stimulate peripheral nerves. That inhibits pain information transmission along nerves.[23]

Manual therapy such as fascial therapy, passive mobilization and stretching; manual orthopaedic therapy and proprioception training are recommended for physical therapy management for cases with haemophilia,[24] but joint traction as a manual therapy technique.[25]

haemophilia is a congenital X-linked bleeding disorder in which blood does not properly clot. It is categorized as a disorder of haemostasis. haemostasis, the stopping of bleeding after a blood vessel is injured, normally is divided into two separate processes—primary and secondary haemostasis. In haemophilia, secondary haemostasis (which essentially results in the formation of a fibrin clot) is defected. Thus, deficient clotting is due to an abnormality of the functional plasma-clotting proteins, factors VIII and IX, that are involved in this process. [26]