As highlighted by Gunel (2011) Pediatric Rehabilitation requires a Multidisciplianary (MDT) Approach in order to promote the independence of the child with an impairment, both functionally and psychologically and increase the quality of life of both the child and their family. Physiotherapists, viewed as the 'movement expert', play a key role within this MDT. The main aim of Physiotherapy, as identified by Gunel (2011), is to support the child with Cerebral Palsy to achieve their potential for physical independence and fitness levels within their community, by minimising the effect of their physical impairments, and to improve the quality of life of the child and their family who have major role to play in the process. [1]

Physiotherapy focuses on function, movement, and optimal use of the child's potential and uses physical approaches to promote, maintain and restore physical, psychological and social well-being within all environments of the child including home, school, recreation, and community environments. [1]

Gross motor skills, functional mobility in the management for the motor deficits, positioning, sitting, transition from sitting to standing, walking with or without assistive devices and orthoses, wheelchair use and transfers, are all areas that the physiotherapist works on using a wide range of physiotherapeutic approaches to influence functional ability of the child, which we will review. [1] [2]

According to Patel (2005) a wide range of therapeutic interventions have been used in the treatment and management of children with cerebral palsy. They show that there is evidence to support the use and effectiveness of neuromuscular electrical stimulation, while evidence in support of the effectiveness of the neurodevelopmental treatment is equivocal at best. The effectiveness of many other interventions, including include: sensory integration, body-weight support treadmill training, conductive education, constraint-induced therapy, hyperbaric oxygen therapy used in the treatment of cerebral palsy have not been clearly established based on well-controlled trials. We provides an overview of salient aspects of popular approaches and interventions used in the management of children with Cerebral Palsy. [2] [3]

Antilla (2008) identifies a wide range of choices and availability of various techniques which may vary both between therapists and from country to country. Table 1.7 below lists many of the most common physiotherapy and physiotherapy-related approaches utilised in the management of Cerebral Palsy during the past few decades. [4] 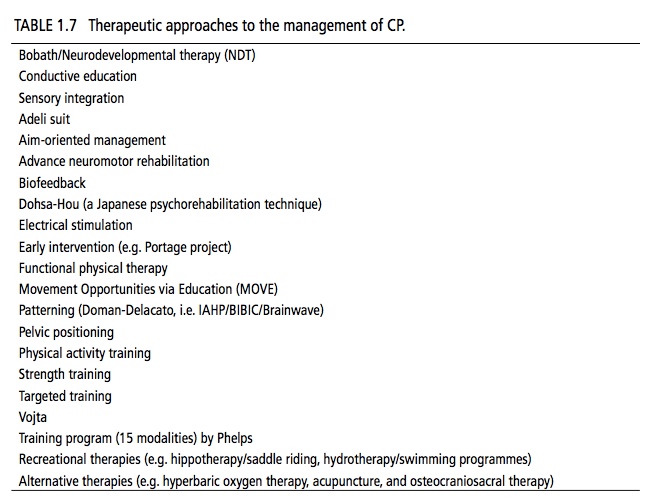 One of the more popular approaches utilised in the management of cerebral palsy, the NDT Approach also know as Bobath Approach, was developed in the 1940's by Berta and Karl Bobath, based on their personal observations working with children with cerebral palsy. The basis of this approach is that motor abnormalities seen in children with Cerebral Palsy are due to atypical development in relation to postural control and reflexes because of the underlying dysfunction of the central nervous system. This approach aims to facilitate typical motor development and function and to prevent development of secondary impairments due to muscle contractures, joint and limb deformities. Although the effectiveness of NDT in Cerebral Palsy has been questioned by some published reports, there are some studies suggesting its effectiveness.[2]

Constraint-induced Movement therapy is used predominantly in the individual with Hemiplegic Cerebral Palsy to improve the use of the affected upper limb. The stronger or non-impaired upper limb is immobilized for a variable duration in order to Force Use of the impaired upper limb over time [2]. Antilla et al (2008) [3] identified one high and one lower-quality trials which measured both body functions and structures, and activity and participation outcomes through use of CIMT. Use of a cast with CIMT showed positive effects in the amount and quality of functional hand use in the impaired limb and new emerging behaviour as compared to the no-therapy group, but no effects were found on QUEST. Use of sling during CIMT also had positive effects on functional hand use on the impaired upper limb, time to complete tasks, and speed and dexterity, but no effects on sensibility, handgrip force, or spasticity. Thus Antilla et al (2005) found there is moderate evidence for the effectiveness of CIMT therapy on functional hand use in the impaired upper limb [3]. According to Patel (2005) the efficacy of this approach has not been established, in particular in relation to the adverse effects of prolonged immobilization of the normally developing upper limb [2].

The concept of patterning is based on theories developed during the 1950's and 1960's by Fay, Delacato, and Doman. Patterning is based on the principle that typical development of the infant and child progresses through a well-established, pre-determined sequence's; with failure to typically complete one stage of development causing inhibition or impairment in the development of subsequent stages. Based on this principal they suggested that in children with Cerebral Palsy typical motor development can be facilitated by passively repeating and putting the child through the sequential steps of typical development, a process called patterning. Parents and other care givers are taught to carry out this patterning process at home but the approach is hugely labour intensive and time consuming as it requires multiple sessions every day. Although Patterning has been utilised for many years its use is now certainly controversial and the effectiveness has not been established. It is a very passive therapy, with little opportunity to encourage the child in their active involvement and its use in children with Cerebral Palsy is not recommended. [2]

It is a manual application for spastic muscles to relieve soft tissue tightness. Manual stretching may increase range of movements, reduce spasticity, or improve walking efficiency in children with spasticity. [5]  Stretch may be applied in a number of ways during neurological rehabilitation to achieve different effects. The types of stretching used include;

The presence of increased tone can ultimately lead to joint contracture and changes in muscle length. When we look at the use of stretch to normalise tone and maintain soft tissue length we employ a slow, prolonged stretch to maintain or prevent loss of range of motion. While the effects are not entirely clear the prolonged stretch produces inhibition of muscle responses which may help in reducing hypertonus, e.g. Bobath's neuro-developmental technique, inhibitory splinting and casting technique. It appears to have an influence on both the neural components of muscle, via the Golgi Tendon Organs and Muscle Spindles, and the structural components in the long term, via the number and length of sarcomeres.

Studies in Mice show that a stretch of 30 mins daily will prevent the loss of sarcomeres in the connective tissue of an immobilised muscle, although the timescale in humans may not relate directly.

Passive stretching may be achieved through a number of methods which include;

The duration of stretch to reduce both spasticity and to prevent contracture are not yet clear from the research and require further research  to determine the most appropriate technique and duration to produce the required effect.

Stimulation of antigravity muscle strength, prevention of hip dislocation, reduction in spasticity and improvements in bone mineral density, self-confidence and motor function have all been achieved through the use of Static Weigh Bearing exercises such as Tilt-Table and Standing Frame. [5]

It aims to increase the power of weak antagonist muscles and of the corresponding spastic agonists and to provide the functional benefits of strengthening in children with CP. [5]

Training related to specific functional activities combining aerobic and anaerobic capacity and strength training in ambulatory children, has been shown to significantly improve overall physical fitness, the intensity of activities, and quality of life. Training programs on static bicycles or treadmill have been shown to be beneficial for gait and gross motor development but have not shown to have any impact on spasticity or abnormal movement patterns. [5] A study suggests the application of plyometric exercises to the physical rehabilitation programs of children with unilateral CP could achieve more significant improvement in muscle strength and walking performance[6].

Stepping movements from Reflex Stepping Reactions are normally present in newborns and infants, before the infant starts to bear weight, stand and walk. Body Weight Supported Treadmill Training, is achieved through supporting the child in a harness on the treadmill in an upright posture limiting overall weight bearing, on a slow moving treadmill, eliciting the stepping movements. Treadmill training, thus allows development of stepping movements needed for ambulation. Studies using 3-4 sessions per week lasting for 3-4 months have shown improvement in lower extremity movements and gait patterns in children with cerebral palsy. [2]

The goal of the electrical stimulation is to increase muscle strength and motor function. Electrical stimulation is provided by Transcutaneous Electrical Nerve Stimulation (TENS) Unit which is portable, non-invasive and can be used in the home-setting by parents or the patient. Neuromuscular Electrical Stimulation (NMES) involves application of transcutaneous electrical current that results in muscle contraction. NMES has been postulated to increase muscle strength by increasing the cross-sectional area of the muscle and by increased recruitment of type 2 muscle fibers. Functional Electrical Stimulation (FES) refers to the application of electrical stimulation during a given task or activity when a specific muscle is expected to be contracting. Patel (2005) has shown there is some evidence to support the use and effectiveness of NMES in children with Cerebral Palsy but found that many of the studies are limited by confounding variables including concomitant use of other therapies, wide variation in methods of application, heterogeneity of subjects, difficulty in measuring functional outcomes and lack of control subjects [2]. Mintaze (2009) proposes that neuromuscular and threshold electrical stimulation as a modality in Cerebral Palsy is used for strengthening the quadriceps muscles in ambulatory diplegic children with Cerebral Palsy, who have difficulty with specific resistive strength training [5].

Gross Motor Function including Muscle tone, Range of Movement, Balance, Coordination and Postural Control in children with CP have been shown to improve with Therapeutic horse-back riding which may reduce the degree of motor disability. Many none physical benefits may also be developed through enjoyment and providing a setting for increased social interaction, cognitive and psychosocial development [2]. Sharan et al (2005) have noted satisfactory results with Hippotherapy in Bangalore, especially in post-surgical rehabilitation [7]. There is limited evidence available with two lower-quality trials on saddle riding on a horse found no between-group differences in muscle symmetry or in any of the seven different outcome measures, except on a sub-item of grasping. [3]

State of the Evidence

Novak et al (2013) have developed a chart based on their Systamatic Review, which looked at the State of the Evidence in relation to Interventions for the management of children with Cerebral Palsy, to assist with comparative clinical decision-making amongst intervention options for the same desired outcome. They mapped the interventions using bubble charts, with the the size of the circle correlated to the volume of published evidence. [8]

The circle size was calculated using;

You can review the article and more detail on their mechanism for rating the interventions at Novak I, Mcintyre S, Morgan C, Campbell L, Dark L, Morton N, Stumbles E, Wilson SA, Goldsmith S. A systematic review of interventions for children with cerebral palsy: state of the evidence. Developmental Medicine & Child Neurology. 2013 Oct 1;55(10):885-910. 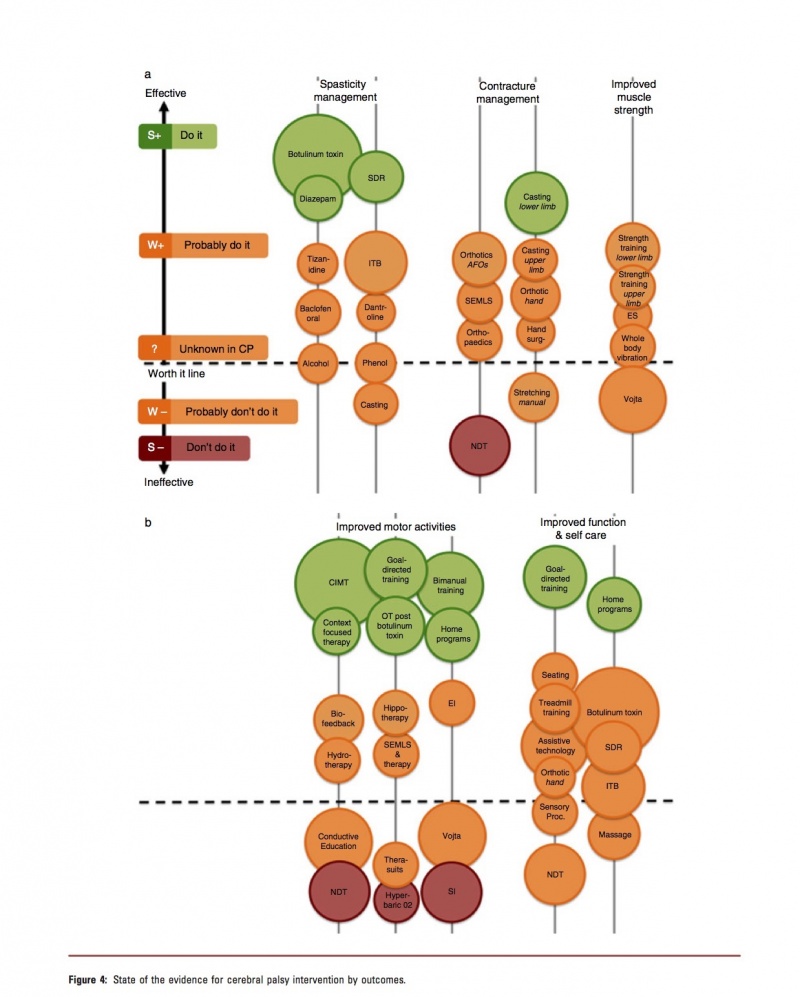 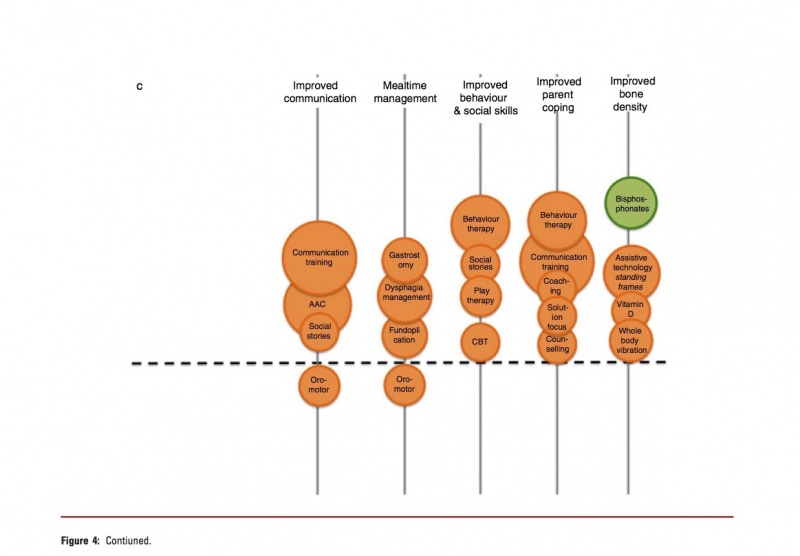