Postural control is the ability to maintain our body in space achieving both goals of stability and orientation[1]. through the process of rehabilitation, we aim to train patients on various tasks according to their activity limitations and participation restrictions to achieve independence in their daily activities and this independence can be achieved only when we put the various factors affecting each postural task into consideration 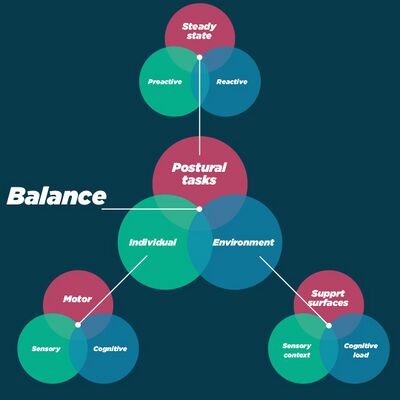 Balance emerges from the interaction of the individual, the task, and the environment; Functional tasks require three types of balance control, steady-state, reactive, and proactive. Environmental constraints such as type of support surface, sensory cues, and cognitive demands. Individual variations such as motor, sensory and cognitive abilities. Also, impact the control of balance. 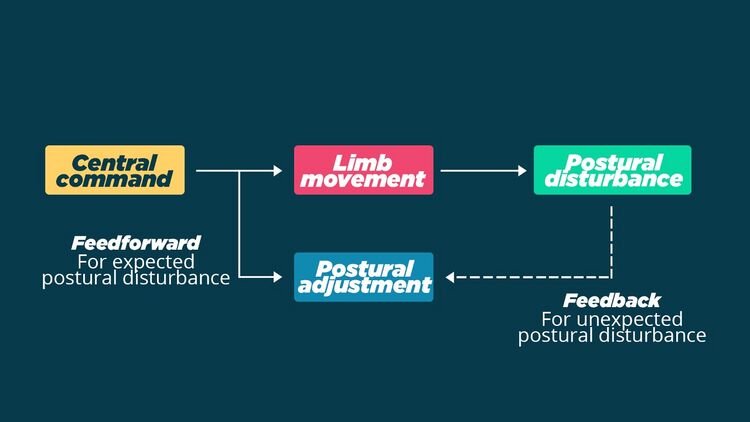 stability required for tasks like sitting or standing is called "static balance" but when we examine the amount of postural sway during these tasks and how our center of mass is controlled within the base of support despite it, we can see how steady-state balance, in this case, can be quite dynamic

Several factors contribute to our ability to maintain steady-state stability

Clinical tests and measures that examine a patient's ability to sit or stand independently, such as the Berg Balance Scale (BBS), are examining steady-state balance.

Movement strategies used to recover stability in response to brief displacements can be categorized into two categories:

Movement patterns used to recover stability following perturbations are selected by the central nervous system (CNS) based on several factors, such as characteristics of the perturbation (e.g., direction and magnitude).

In both standing and sitting most of the postural sway occurs in the Anteroposterior direction, so here are some examples of muscle activity patterns (synergies) used to maintain Anteroposterior stability

Research has demonstrated that during recovery of stability, we continuously change and add multiple synergies, depending on the context of the task at hand. This suggests that when retraining balance, it will be important not to limit training to the activation of a single strategy (e.g., ankle vs. hip vs. step vs. reach) but to create conditions in which strategies are continuously modulated. For example, The use of an ankle strategy (legs and trunk moving in-phase) is predominant when standing on a firm surface; however, there is a shift to using a hip strategy (legs and trunk out of phase) when standing on a foam surface[5]

[6]reactive balance control can be tested by various tests that aim to challenge the patient to regain balance after a challenging task, the following videos are an example of such tests

The Central nervous system (CNS) uses the sensory information gathered by the sensory systems and the information from previous experiences to predict the number of forces and control needed for the task ahead with also the ability to change and adapt to new information if the task turned out to be different than expected; for example when lifting a heavy object it (judging its heaviness upon its shape) the central nervous system prepares us with a magnitude of forces that makes us hold that object higher when we discover that it was lighter than expected, then we adapt to the new information (reactive) and this mistake of ours is saved and added to our proactive control for a better prediction in the future.[2]

Changes in support surfaces affect the organization of muscles and forces needed for balance as we previously mentioned. Differences in visual and surface conditions affect the way sensory information is used for balance control. Finally, daily life often requires that we perform multiple tasks, affecting the way cognitive systems like attention are used for balance and adding more cognitive load to the task at hand.[2]