Cerebral Palsy (CP) is a disorder of movement and posture that appears during infancy or early childhood resulting from damage to the brain. The damage to the brain is permanent and cannot be cured but the earlier we start with intervention the more improvement can be made.Any non-progressive central nervous system (CNS) injury occurring during the first 2 (some say 5) years of life is considered to be CP. There are several definitions of Cerebral Palsy within the literature, although these may all vary slightly in the way they are worded they are all similar and can be summarised to:

Cerebral Palsy is a group of permanent, but not unchanging, disorders of movement and/or posture and of motor function, which are due to a non-progressive interference, lesion, or abnormality of the developing/immature brain[1].

This definition specifically excludes progressive disorders of motor function, defined as loss of previously acquired skills in the first 5 years of life.

We only talk about cerebral palsy if the brain damage arises during one of the following periods:

After the age of 5 we speak of stroke or traumatic brain injury.

Unfortunately, it is difficult to access and clarify the prevalence and incidence rate of disabilities in poor-resource settings (Gladstone, 2010). Not only the prevalence of childhood disability is on the rise and Cerebral Palsy is one of the costliest chronic conditions, but also life expectancies are improving, which increases the burden of Cerebral Palsy (Papavasiliou, 2009). For comparison, in the USA, there are approximately 700'000 children with Cerebral Palsy, 2-5/ 1000 born.

Cerebral Palsy is the most common motor disability in childhood. The aetiology of Cerebral Palsy is very diverse and multifactorial. The causes are congenital, genetic, inflammatory, infectious, anoxic, traumatic and metabolic. The injury to the developing brain may be prenatal, natal or postnatal. As much as 75%-80% of the cases are due to prenatal injury with less than 10% being due to significant birth trauma or asphyxia. The most important risk factor seems to be prematurity and low birth weight with risk of Cerebral Palsy increasing with decreasing gestational age and birth weight.

The overall prevalence worldwide has increased during the last decades because of increased survival rates. Here are some facts on the epidemiology of Cerebral Palsy:

Improved medical care has decreased the incidence of Cerebral Palsy among some children. Medical advances have also resulted in the survival of children who previously would have died at a young age.

The type of cerebral palsy has also changed:

There are different risk factors for each stage at which a child might develop Cerebral Palsy. These can be broken down into Prenatal, Perinatal and Postnatal.

For example: Some children may have an isolated hearing loss from their meningitis, others will have severe intellectual disability and some will have Cerebral Palsy.


The SC and SCPE classifications of Cerebral Palsy sub-type require the clinician to identify the predominant motor disorder. [8] There is some concern relating to the validity and reliability of the SC and SCPE tools, with only a moderate level of agreement achieved for the intra-observer reliability of Cerebral Palsy subtypes. [9] The differences arise when clinical opinion is divided over which motor pattern is predominant. However
Rosenbaum et al. [10] proposed that children with Cerebral Palsy continue to be classified by the predominant type of tone or movement abnormality (categorised as spasticity, dystonia, choreoathetosis, or ataxia) and that any additional tone or movement abnormalities present be listed as secondary types and to record the anatomical distribution of features.


While the SC and SCPE tools may help describe a child’s presentation, they do not define any criteria for recording the functional abilities of the child. Identifying, describing and classifying a child’s functional abilities can also increase the reliability of diagnosing children with Cerebral Palsy. Further research has focused on developing gait and functional classification systems for ambulatory children with Cerebral Palsy. 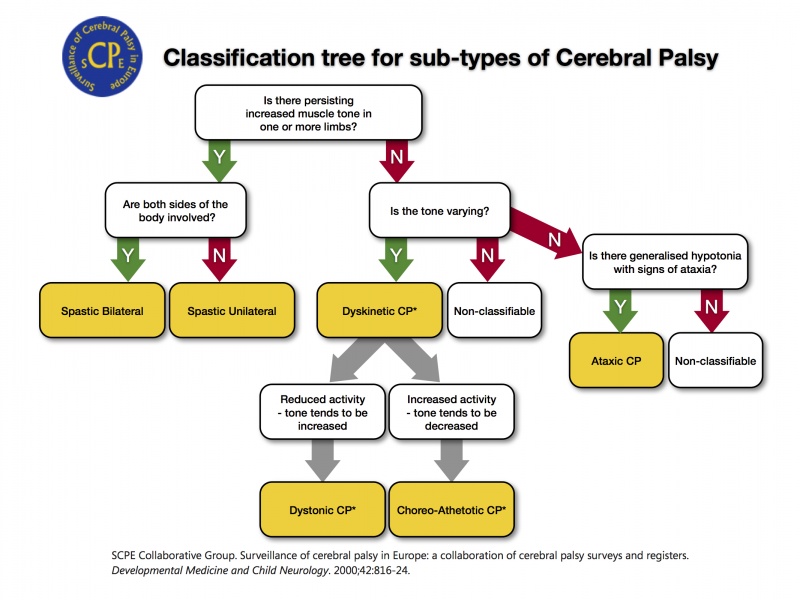 Anatomical classification are as follows:

Spastic Cerebral Palsy is characterized by at least two of the following symptoms, which may be unilateral (hemiplegia) or bilateral:

With hemiplegia, one side of the body is involved with the upper extremity generally more affected than the lower. Seizure disorders, visual field deficits, tactile agnosia, and proprioceptive loss are likely. Twenty percent of children with spastic Cerebral Palsy have hemiplegia. A focal traumatic, vascular, or infectious lesion is the cause in many cases. A unilateral brain infarct with posthemorrhagic porencephaly (cysts or cavities within the cerebral hemisphere) can be seen on Magnetic Resonance Imaging (MRI).

With diplegia, the lower extremities are severely involved and the arms are mildly involved. Intelligence usually is normal, and epilepsy is less common. Fifty per cent of children with Spastic Cerebral Palsy have diplegia. A history of prematurity is usual. Diplegia is becoming more common as more low- birth-weight babies survive. MRI reveals mild Periventricular Leukomalacia (PVL).

With quadriplegia, all four limbs, the trunk and muscles that control the mouth, tongue and pharynx are involved. Thirty percent of children with Spastic Cerebral Palsy have quadriplegia. More serious involvement of lower extremities is common in premature babies. Some have perinatal hypoxic ischemic encephalopathy. MRI reveals Periventricular Leukomalacia (PVL).


Dyskinetic Cerebral Palsy is characterised by the following Symptoms:

Dyskinetic Cerebral Palsy may be either:

Ataxia is loss of balance, coordination and fine motor control. Ataxic children cannot coordinate their movements. They are hypotonic during the first 2 years of life. Muscle tone becomes normal and ataxia becomes apparent toward the age of 2 to 3 years. Children who can walk have a wide-based gait and a mild intention tremor (Dysmetria). Dexterity and fine motor control is poor. Ataxia is associated with cerebellar lesions. Ataxia is often combined with spastic diplegia. Most ataxic children can walk but some need walkers.


Ataxic Cerebral Palsy is characterized by the following symptoms:

Children with a mixed type of Cerebral Palsy commonly have mild spasticity, dystonia and/or athetoid movements. Ataxia may be a component of the motor dysfunction in children in this group. Ataxia and spasticity often occur together. Spastic Ataxic Diplegia is a common mixed type that often is associated with hydrocephalus.

Here is some of the clinical terminology used when talking about Cerebral Palsy: 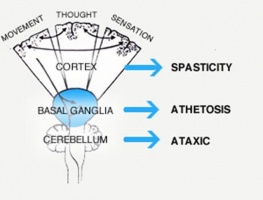 Knowing where the damage could be located will not influence your interventions. Look at the following pictures of the brain to understand the relationship between the location of the damage and the symptoms.

This table highlights the problems that children with Cerebral Palsy experience in different areas.

This image gives a nice pictorial overview of the problems experienced by children with Cerebral Palsy. 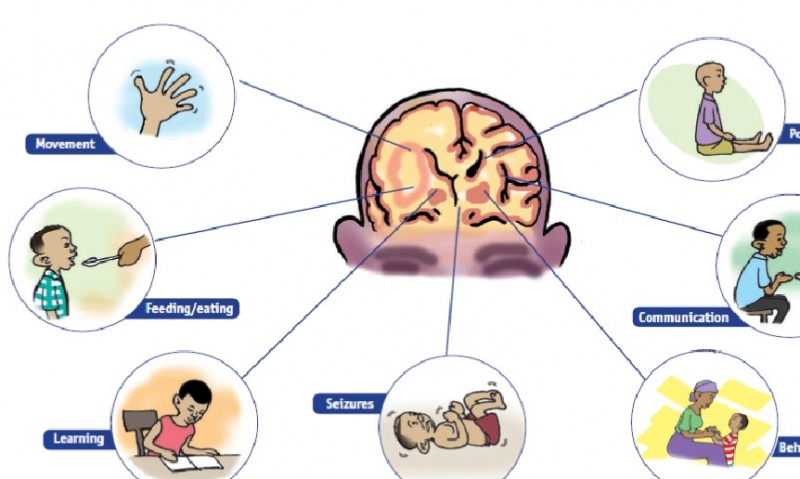 Cerebral palsy is one of the main causes of childhood disabilities, with many different signs, symptoms, and challenges. There is no one test to confirm if a child has cerebral palsy or something else. There is no blueprint of interventions for a child with cerebral palsy and each child is different and unique. Classification of gross motor, fine motor and communication will help medical professionals and the family to better understand the abilities of the child and what to focus on for interventions.

Mortality in Cerebral Palsy is extremely variable. Life expectancy is normal in most diplegic and hemiplegic children who receive adequate medical care and have strong family support. Some severely affected quadriplegics die of malnutrition, infections or respiratory problems before reaching adolescence. In some very poor and poor resource areas children with cerebral palsy may not reach the age of 5 years.

Outcomes in early childhood provide clinicians with development information about the children born extremely preterm (EP, <28 weeks’ gestation), but outcomes at school-age are more informative of life-long functioning. According to the review[13], children born extremely preterm at school age have substantially higher rates of intellectual impairment, more neurodevelopmental disability, poorer health-related quality of life, poorer executive, academic and motor function than term-born controls. Understanding and knowledge of a range of important school-age outcomes could help target interventions specifically, focusing periods before, during, after birth, and throughout the lifespan.

Communication is necessary to express thoughts, feelings, and needs. Every individual with Cerebral Palsy needs a way to communicate to be part of the family and the community. If the child can produce comprehensible sounds and syllables by 2 years of age, they will probably have normal verbal communication but considerations need to be made for those whose communication skills are severely affected. Alternative methods such as communication methods such as simple communication boards in children who have difficulty speaking.

Activities of daily living are self-care activities such as feeding, toileting, bathing, dressing, and grooming in addition to meal preparation and household maintenance. Dyskinetic and total body involved children have problems of dexterity and fine motor control that prevent independence in activities of daily living. Hemiplegic and diplegic children can become functional in these areas. They sometimes need the help of (occupational) therapy. Family attitude is a critical factor determining the level of independence of a child. Overprotection results in a shy and passive individual who has not gained self-care abilities.

Children have to explore their surroundings to improve their cognitive abilities. Mobilisation is crucial for the young child with a disability to prevent secondary mental deprivation. The use of wheelchairs or other mechanical assertive devices can help to promote independent mobility in the community if the child cannot mobilize through walking. Mobility is important to function in fast-paced societies and people who have difficulty moving are always at a disadvantage. In the adult, becoming an independent member of the society and earning a living depends upon independent mobility. Families view ambulation as the most important issue during childhood. Every effort must be made to increase the child’s ability to walk; however, walking depends more on the extent of the child’s neurological impairment rather than the amount of physical therapy, surgery or bracing that they receive. The child can achieve his/her own maximum potential with practice.

Focus on ambulation should not result in neglecting communication and cognitive development. Priorities change in adolescence as they need education, independence, and active social life. Although ambulation is still important, it is needed less to function. Learning how to use computers may benefit the adolescent in the long term rather than being able to take a few assisted steps.
Mobility is important for the child, whereas social identity and independence are more valuable for the adolescent. A trial protocol aims to estimate the feasibility of a Dance PaRticipation intervention for preschool-age children (3 years corrected age) born extremely preterm (EP)/extremely low birth weight (EBLW) with motor impairment[14].

International classification of functioning, Disability, and Health (ICF) can be used to describe the treatment approach in CP. Please see the link below to understand better.