Worldwide the physiotherapy community is divided by name, with three different primary titles used: physiotherapy, physical therapy and kinesiotherapy. Notwithstanding, that within the term physiotherapist, there are also language derivations such as fisio, fisicos, fysio and fiso.  Finding a single word to describe the community is always goingto be difficult.

Physiotherapy as described by World Physiotherapy is a health care profession concerned with human function and movement and maximising physical potential. It is concerned with identifying and maximising quality of life and movement potential within the spheres of promotion, prevention, treatment/intervention, habilitation and rehabilitation[1]. It uses physical approaches to promote, maintain and restore physical, psychological and social well-being, taking into account variations in health status.  It is science-based, committed to extending, applying, evaluating and reviewing the evidence that underpins and informs its practice and delivery.  The exercise of clinical judgement and informed interpretation is at its core[2].

Physiotherapists and Physical Therapists (PTs) work within a wide variety of health settings to improve a broad range of physical problems associated with different 'systems' of the body. In particular they treat neuromuscular (brain and nervous system), musculoskeletal (soft tissues, joints and bones), cardiovascular and respiratory systems (heart and lungs and associated physiology).

Physiotherapists work autonomously, often as a member of a team with other health or social care professionals. Physiotherapy practice is characterised by reflective behaviour and systematic clinical reasoning, both contributing to and underpinning a problem-solving approach to patient-centric care.

Physicians like Hippocrates, and later Galenus, are believed to have been the first practitioners of physiotherapy, advocating massage, manual therapy techniques and hydrotherapy to treat people in 460 B.C.[4] After the development of orthopedics in the eighteenth century, machines like the Gymnasticon were developed to treat gout and similar diseases by systematic exercise of the joints, similar to later developments in physiotherapy.[5] 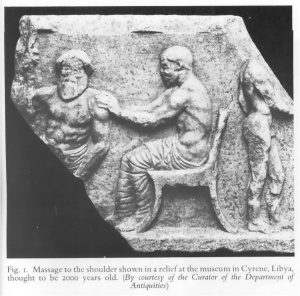 Shoulder Massage: Relief at Museum in Cyrene Libya thought to be 2000 years old

The earliest documented origins of actual physiotherapy as a professional group date back to Per Henrik Ling “Father of Swedish Gymnastics” who founded the Royal Central Institute of Gymnastics (RCIG) in 1813 for massage, manipulation, and exercise. In 1887, PTs were given official registration by Sweden’s National Board of Health and Welfare.

Other countries soon followed. In 1894 four nurses in Great Britain formed the Chartered Society of Physiotherapy.[6] The School of Physiotherapy at the University of Otago in New Zealand in 1913,[7] and the United States' 1914 Reed College in Portland, Oregon, which graduated "reconstruction aides."[8]

Treatment through the 1940s primarily consisted of exercise, massage, and traction. Manipulative procedures to the spine and extremity joints began to be practiced, especially in the British Commonwealth countries, in the early 1950s.[9][10] Later that decade, PTs started to move beyond hospital based practice, to outpatient orthopedic clinics, public schools, college/universities, geriatric settings, rehabilitation centers, hospitals, and medical centers.

Specialization for physical therapy in the U.S. occurred in 1974, with the Orthopaedic Section of the APTA being formed for those physical therapists specializing in orthopaedics. In the same year, the International Federation of Orthopaedic Manipulative Therapy was formed,[11] which has played an important role in advancing manual therapy worldwide since.

Alice Thompson. Becoming a Physiotherapist Is Physiotherapy the career for you?An interactive insight into the profession and a quick guide to getting onto the degree course. 2012

Because the body of knowledge of physiotherapy is quite large, PTs tend to specialize in a specific clinical areas. These include: