The mandible is the largest and strongest bone of the human skull. It is commonly known as the lower jaw and is located inferior to the maxilla. It is composed of a horseshoe-shaped body which lodges the teeth, and a pair of rami which projects upwards to form a temporomandibular joint.[1][2]

The mandible is formed by a body and a pair of rami along with condyloid and coronoid processes.

Body is the anterior portion of the mandible. Body has two surfaces: outer and inner and two borders: upper and lower border. [2]The body ends and the rami begin on either side at the angle of the mandible, also known as the gonial angle. [1]

The ramus is lateral continuation of the body and is quadrilateral in shape. The coronoid process is the anterosuperior projection of the ramus which is triangular in shape. Whereas posterosuperior projection of ramus is known as condyloid process whose head is covered with fibrocartilage and form a temporomandibular joint. The constricted part below condyloid process is neck. Condyloid and coronoid process are separated by a mandibular notch. It has two surfaces: medial and lateral and four borders: superior, inferior, anterior and posterior.[1] 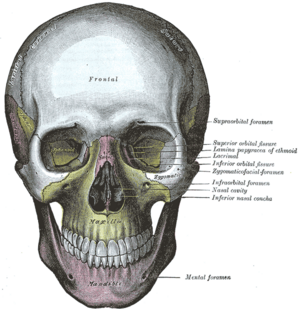 The skull showing the mandible

The mandible changes throughout the life. In infant and children, the angle of mandible is obtuse with 140 degrees or more making head in line with the body of the mandible. Whereas in adult the angle decreases to about 110-120 degree making ramus almost vertical.[1][2]