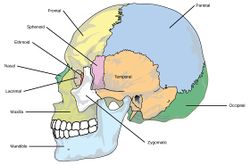 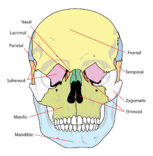 The skull is the most intricate bony structure of the body. It is made up of 28 individual bones, out of which 11 are paired and 6 are single [1]. The skull formation is divided into 2 parts:

The Viscerocranium is further divided into:

In this article, we will cover the facial skeleton.

Since the facial skeleton is the foundation for the facial muscles, it is not inaccurate to say it helps in determining an individual's facial appearance.

It is made up of 14 bones which integrate to house the orbits of the eyes, nasal and oral cavities along with the sinuses. The facial skeleton consists of[1]:

This forms the forehead region of the face housing the frontal sinuses. It forms the roof of the ethmoid sinuses, nose and orbit (for the eye)[2]

The zygoma forms the lateral rim and wall of the orbit, and forms the anterior zygomatic arch[2].

This forms the roof of the oral sinus, as well as housing the upper teeth. It also forms part of the roof and lateral wall of the nasal cavity.

The nasal bones are a pair of bones which form the upper part of the nasal cavity[6]. They articulate with the maxilla and the frontal bone.

Also known as the Jaw Bone, the mandible is the only mobile bone of the facial skeleton. It houses the lower teeth.

This pair of small bones form part of the lateral wall of the nasal cavity.

These small, fragile bones lie in the antero-medial part of the orbit.

Together with the maxillae, these form the hard palate.

This is an single bone (unpaired) which forms the inferior portion of the nasal septum.

2 part tutorial on Bones of the Facial Skeleton: