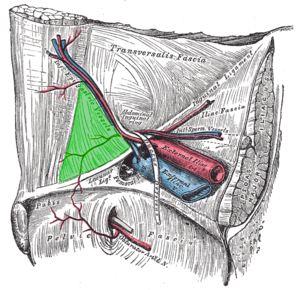 The inguinal ligament or Poupart's ligament formed from the aponeurosis of the lower border of external obliquis muscle. It has 2 surfaces concave and convex, the convex surface toward the thigh attached to the deep fascia that pulling the ligament downward. It is a site for attachment of internal obliquis muscle at the lateral 2/3 and transversus abdominis at the lateral 1/3. It extends from the pubic tubercle medially to ASIS laterally and forming the superior border of the femoral triangle.

The midpoint between the ASIS and symphysis pubis called midinguinal point, an important surgical landmark, behind the external iliac artery continues as the femoral artery. The inguinal ligament has three extensions; lacunar, pectineal, and reflected part.

The inguinal ligament is considered as a landmark to distinguish clinically between the groin hernia in which the bulge is above the ligament, and femoral hernia the bulge is below the ligament[2].

From the patient supine position the hip in abduction, externally rotated and knee flexed, the structures related to the pubic tubercle examined by careful palpation from adductor tendon medially, then pectineus, lacunar ligament, inguinal ligament, conjoined tendon, and rectus sheath attachment (pubic clock), through the posterior inguinal canal, and during the assessment, the tenderness may extend along the inguinal ligament.

Treatment of inguinal disruption varying from:

NSAID , corticosteroid injection into the origin of adductor longus.

Physiotherapy management involving the release of the inguinal ligament (according to the structure of the ligament we can treat it as a tendon).