This article or area is currently under construction and may only be partially complete. Please come back soon to see the finished work! (4/02/2023) 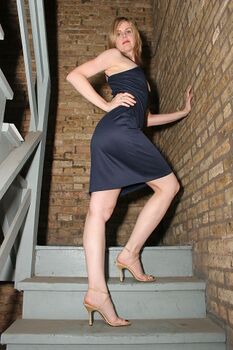 Although there is a perception that wearing high heels can increase a woman's attractiveness they can change the biomechanics of walking and can affect gait by reducing stride length, increasing pelvic tilt and hip rotation. [1]

A systematic review by Barnish et al found that with wearing high heels there are incorrect variations to the neuromechanics of walking gait, and kinematics and kinetics of structures within the body, from the spine to the toes. This creates a risk for various conditions such as musculoskeletal pain, hallux valgus, ankle inversion injuries, and osteoarthritis. There can also be deviations in foot and ankle kinematics, kinetics, knee and hip flexion, gait, posture, and balance. Increased lumbar lordosis due to an increased pelvic tilt can be associated with the risk of low back pain. [2]

It is seen that the use of high heels in adolescents, individuals ranging from 10-19 years old, can lead to postural impairments, which effects head positioning, the back, pelvis, and the knee. Heel height and width are primary contributors to postural changes, and body imbalance. [2]

High heels are also seen to increase lumbar lordosis. They raise the Center of Mass (CoM), decreasing postural stability. It is interesting that there may be a heel height where the trunk muscles cannot adjust for ground reaction forces or CoM changes. Due to these changes, there is an adjusted increase in erector spinae activity, to maintain the deviated posture. The increased muscle activity can lead to increased discomfort and muscle fatigue. This would help explain the onset of low back pain in individuals who use high-heels for an extended period. It is found that the activity of trunk muscles increase as heel height increases, thus resulting in fatigue and discomfort of back muscles in women wearing high heels. [3] 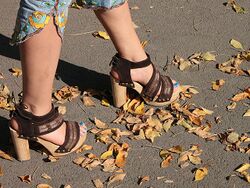 There are various muscles that have an altered activation with the use of high heels. The study by Simonsen et al (2012) made note of eight of these muscles. When women walked with a 9cm high heel, compared to barefoot, there was a difference in: [4]

As a result of the increased knee joint extensor moment during walking with high heels, there are increased bone-on-bone forces in the knee joint. This may help explain the increase in the onset of knee osteoarthritis in women.[4]

It is seen that there is an increased pressure distribution under the foot with the use of of high heels and with increasing heel height. [4]

There was an increased ankle angle with wearing and walking in high heels. As the ankle should, it was driven into a plantarflexed position at the end of stance. With high heels, the knee joint was also flexed more during heel strike and early stance. [4]

There was a decrease in the ankle joint moment with high-heel waking, compared to barefoot walking. This may be due to a decreased muscle fiber length and moment arm at the achilles tendon with a more plantarflexed position with barefoot walking. This reduction in net joint moment during push-off may be caused by the fact that the ankle is already plantarflexed, and there is less of a need for a large plantarflexor moment. [4] 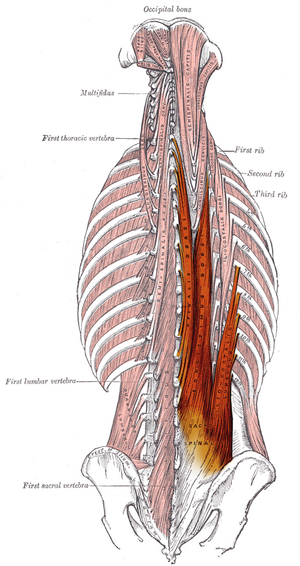 The increased heel height produces an altered activation timing of the erector spinae muscles. A study showed that there was an early activation of the erector spinae muscles with the use of high heels. This goes to show that foot wedging can produce distinctive changes in the timing of muscle activation in the low back and pelvis, during gait. This may be clinically significant since an even short increase in EMG activity of the back muscles can lead to chronic overload and fatigue. [3]

A study measured the EMG of the erector spinae and pelvis kinematics, at normal walking speeds, of younger women and middle-aged women, in three conditions: without shoes, in low-heeled shoes (4cm), and high heeled shoes (10cm). It is seen that as heel height increases, erector spinae EMG activity increases. [3]

As can be seen throughout various studies, there are biomechanical differences according to the age range of individuals. [3] The lumbar spine absorbs and transmits the weight of the body. Differences are seen since the spinal column undergoes physical changes as individuals age. The curvature of women's spines gradually and moderately decrease from the late 20s to the 30s, with a decrease beginning thereafter. A second decrease in curvature begins once women reach 50 years. [5]

In younger women, within the three conditions of increasing heel height, there was an increased EMG activity recorded during gait at initial ground contact (heel strike) and at toe off. However, EMG activity did not differ much between wearing high heels and low heels. In addition, with high heels, there was a greater pelvic range of motion in the sagittal plane, compared to low heels and no heels. It is seen that younger individuals have a pronounced anterior pelvic tilt, and an increased spine lumbar lordosis. The increased lumbar lordosis, in younger women, does assist the spine in absorbing the increased vertical shock. However, this may lead to hyperlordosis with long-term use caused by changes in postural muscle activity. [3]

In middle aged Women, there was a significantly higher lumbar erector spinae EMG activity between wearing high heels and with no heels. There was no significant difference between wearing low heels and no heels. They are seen to have a pronounced posterior pelvic tilt, and a reduced spine lordosis. With a posteriorly tilted pelvis, the hamstrings may become lax, which may lead to the loss of muscle tone in the hamstrings, and ongoing iliopsoas muscle activity, causing an anterior shift of the pelvis, and thus the hyperlordotic lumbar spine. [3]

Its interesting to note these differences since these changes in middle-aged Women can increase soft tissue mechanical loading, which can facilitate degenerative changes. This can be noticed in those individuals with low back and knee concerns. The increased lumbar erector spinae EMG activity has the potential to cause muscle overuse, which could lead to low back problems. [3]

Here is a video to explain the effects on the erector spinae: [6] 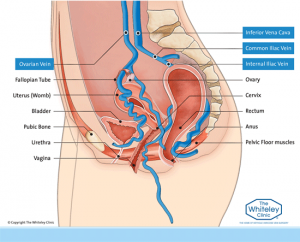 The lower pelvic range of motion in middle aged women, compared to younger women, can signify that tissues in the lumbopelvic region become more rigid as one ages. Thus, the harmful effects of high heels on posture and spinal tissues may be more apparent with age. [3]

It is seen that changes in body tissue and structure due to ageing, such as worsening of tissue elasticity or tissue perfusion, alters the biomechanical adjustments brought on by wearing high heeled or stiletto type shoes. Thus, differences are noticed between young women and middle-aged women. [3]

It is interesting to note that gait velocities were not significantly different between young women and middle-aged women, and between the conditions of wearing no heels, low heels, and high heels. [3]

As noted, there is a large difference in lumbar spinae erector muscle activity between high heels and low heels, and high heels and no heels. Therefore, it is safe to say that EMG activity increases as heel height increases. [3]

Studies have shown that gait with high heels is less energy efficient, which can increase fatigue, reducing reflex and voluntary movement responses, in addition to changes in rate of muscle activation and strength. [3]

The use of high heel shoes aligns the foot in plantarflexion, which produces increased ground reaction forces that have an effect on the spine. Initial ground contact at the beginning of the gait cycle, induces a force caused by an increased ground reaction force, which is transmitted up the spine. This can pose as a danger of low back pain, as it relates to heel height. It is possible that loads absorbed by tissues during gait may further aggravate low back pain symptoms. However, the increased loads can in fact be dampened by alterations in the kinematics of the body, or through direct absorption by the soft tissues. [3]

Increased lumbar lordosis, which occurs with the use of high heeled shoes, has a purpose of absorbing the vertical loads. Thus, repetitive strain injuries can be caused by tissue overload that is not accommodated for in high heeled gait. [3]

Local muscle fatigue can be triggered by increased back muscle activity with high heeled gait. The accumulated muscle fatigue can lead to structural soft tissue impairments, such as swelling or restricted movement. In fact, this low intensity repetitive strain, at 2% of maximal load, of the lumbar muscles has been shown to reduce tissue oxygenation. Prolonged isometric muscle contraction at this intensity can also lead to repetitive strain injury in the lumbar region. Contrarily it is said that the chance of musculoskeletal injury can be reduced if the muscles can rest at levels below the 1-2% of maximal load. However, the fatigue can have an effect on the timing of lumbar muscle activation and lead to spinal tissue damage. Muscle fatigue and instability of the lumbar spine is seen to be a cause and effect of low back pain. Therefore, these microtrauma stresses that would occur to individuals who wear high heels for prolonged periods could lead to various deformities, impairments, and postural compensations. [3]

The use of high heels causes the body's CoM to move anteriorly and superiorly. This shift in the CoM may necessitate an earlier onset and greater activation of the erector spinae muscle activity to maintain balance and stability in the lumbopelvic region during gait. This increased contraction of the erector spinae muscles may cause an extension movement of the lumbar spine. This would lead to a posterior shift of the CoM balancing the anterior displacement caused by an increased heel height. [3]

Also, walking on harder surfaces causes an increased level of peak acceleration of ground reaction forces in the lumbar region. [3]

Here is a video explaining the gait disturbances in reference to high heel usage: [7] 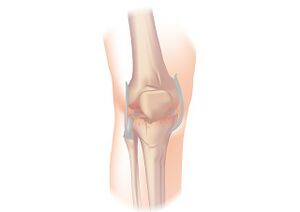 Various biomechanical reviews show evidence that there is a risk of osteoarthritis, though there isn't evidence from epidemiological studies. [4]

A positive knee joint moment in the frontal plane, termed a valgus moment, may be crucial for joint deterioration due to osteoarthritis. When the knee joint is directed into a varus position, there will be an 'opening' of the lateral compartment, and the entire loading will be focused on the articular surfaces of the medial compartment. [4]

Similar to an increased body mass index, pregnant women have an anteriorly tilted pelvis, due to their altered mass distribution. The adjustment for the shift in center of gravity from the increased body mass causes postural changes, which affect the position of the head, the neck, and the trunk. [5]

An injury, caused by another person, due to the mechanism of a stiletto (heels that are higher than 1 inch) is very possible, and can lead to temporary or more long-term impairments or damages, especially when involved in stepping on another individual or used in a fight. [2]

Here are some brief fun yet informative videos explaining the health effects of high heels, and where caution should be taken .

This is a very technical video of the effects on the spine. [9]

Here is a video describing foot impairments or deformities that can occur with the use of high heels. [10]